There has been a lot of excitement during the weeks building up to the Fallas. At this point, it seems that the city is about to explode. The sulfurous smell of gunpowder permeates the air. Fireworks, M-80s and bottle rockets have become common place. Explosions can be heard in all directions, night and day, sometimes within feet of where you are standing.

Children rule the streets with a constant barrage of firecrackers. They carry boxes around their necks filled with explosives and toss them into the street when you least expect it. The law says that a parent must be nearby, but that’s not very comforting. I saw a woman pushing a stroller with a toddler who tossed “snaps” onto the sidewalk every few feet. No doubt the little girl is in training for a few years from now, when she can finally light a real firecracker on her own. In Valencia, children as young as eight are legally allowed to handle firecrackers.

I think it’s awesome that kids have the freedom to have this much fun with firecrackers; on the other hand, it’s a bit terrifying. I read in the paper that police and firemen visit the schools to teach kids how to properly light a firecracker, so I guess that should make me feel better.

It’s not just the children of Valencia that like loud noises. We were finishing up a lovely lunch outside on a restaurant terrace, when a van pulled up. They threw up a fence and started stringing these up in trees next to our table. 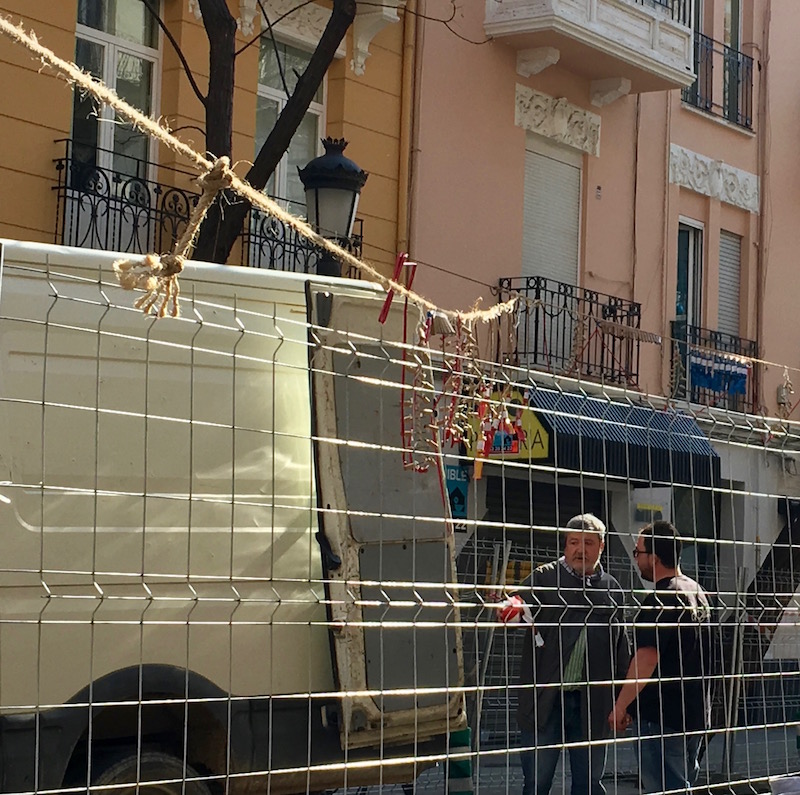 We looked at each other with concern. They wouldn’t, would they?

Just in case, we drained our glasses and moved on. Why? Because those innocent little paper packets are full of gun powder. Those are mascletàs – typical Valencian fireworks designed to make noise and flashes of light. They are strung in patterns to explode in a choreographed rhythm, producing a kind of music (to the Valencian ears) and rising to a dramatic, almost unbearable conclusion.

Despite the title of this post, and our instincts, we’ve been told not to cover our ears. You are supposed to be better off if you keep your ears and mouth open to let those sound waves pass right through. With our sensitive American ears, however, we try to be several blocks away when these go off. But then later that evening, we wandered into a blocked off street just in time for this (you may want to turn down the volume on your computer for this video):

Yep, those are mascletàs. It’s not going to quiet down in Valencia anytime soon. We have had mascletàs in the Ayuntamiento (town hall) every day at 2:00PM since the beginning of March. This week during Fallas, there will be overhead firework displays Wednesday, Thursday, Friday, and Saturday – all after midnight. Clearly this is no time or place for peace and quiet, but for loud riotous fun. We’ll have to save our sleep for next week.

2 responses to “Fallas is Here, Now Cover Your Ears”