Just about every old city has at least one—a neighborhood or street, previously neglected or fallen on hard times, that is undergoing an urban renewal. Trendy restaurants and bars start popping up, energy is high, and suddenly it’s the coolest part of town. We seek out these kind of places when we travel. We’re always interested to see the up and coming food trends, because food culture is not limited to just traditional food. It is constantly evolving with the times. We found one such area in the historic city center Baixa district of Porto, just a few blocks west of the Aliados Metro station.

Construction cranes in Baixa, a sign of urban renewal

It seems that the entire downtown Baixa district is under construction with rehabilitation projects, historic buildings being restored, and new businesses opening. Rua da Picaria, in particular, was once known for its furniture stores and has now become a gastronomic destination. This short street only extends for one block and yet we counted over a dozen bars and restaurants. Together with the surrounding streets, this area proved to be a haven of interesting, creative restaurants serving a diversity of cuisines from around the globe. You’ll find Asian street food, Venezuelan arepas, a Japanese sushi bar, Portuguese tapas, Napoletana pizza, and even a small craft brewery to name just a few. We ran out of time and didn’t make it to all of them, so these were our favorites:

We had been searching for a wine bar that was lively but not overrun with tourists, a comfortable place where we could try some different Portuguese wines with the help of knowledgeable staff. We found what we were looking for at Cafe Candelabro. 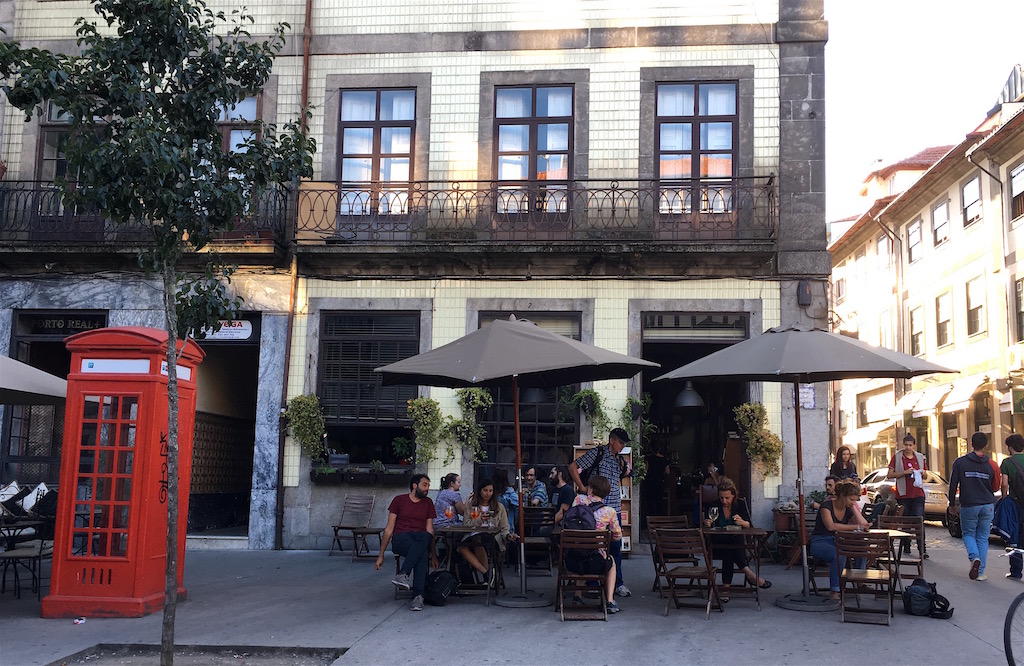 Candelabro sits on the corner of Rua da Conceição and Rua da Picaria, just about a six minute walk from the Aliados Metro station. They opened in 2009 in a space that was previously a second-hand bookstore and they still buy and sell books. However, we didn’t feel like we were in a bookstore, but a relaxed cafe where you could unwind while sipping a drink on the terrace.

There is a small cozy bar inside where we could sit and talk with the friendly bartender, trying wines based on his recommendations. They are not officially a wine bar, but there is an interesting selection of Portuguese wines, and only from small wineries, we were told—no wines you would find in the stores. There were ten wines by the glass listed on the board, five white, five red. We also tried a few that were not listed, the advantage of showing an interest in something new.

They have some small plates, like hummus and bruschetta, available if you like something to eat with your drink. We heard that it can get very busy after 6pm, when people get off work and are looking to meet friends for an afterwork drink. We were always there in the early afternoon and had no problem finding space.

Heading down Rua de Picaria, we were drawn into Boa-Bao by the lively Asian street market decor, open kitchen, and expansive terrace scattered with colorful umbrellas. The menu really appealed to us, with Pan-Asian cuisine from ten different countries throughout Asia including Thailand, Malaysia,Vietnam, Japan and China. You’ll find small plates like dim sum and spring rolls, soups, salads, curries, wok dishes like pad thai and fried rice, and of course, gua bao.

The colorful patio at Boa Bao

The gua bao (steamed buns) were delivered hot and fresh in the baskets that they were steamed in. The springy rolls were jam packed with meat. We tried the Peking duck, which was well seasoned with hoisin sauce, cucumber and spring onion; and the classic pork belly. The melt-in-the-mouth richness of pork belly combined with the tang of pickled vegetables is always a winner in my book. 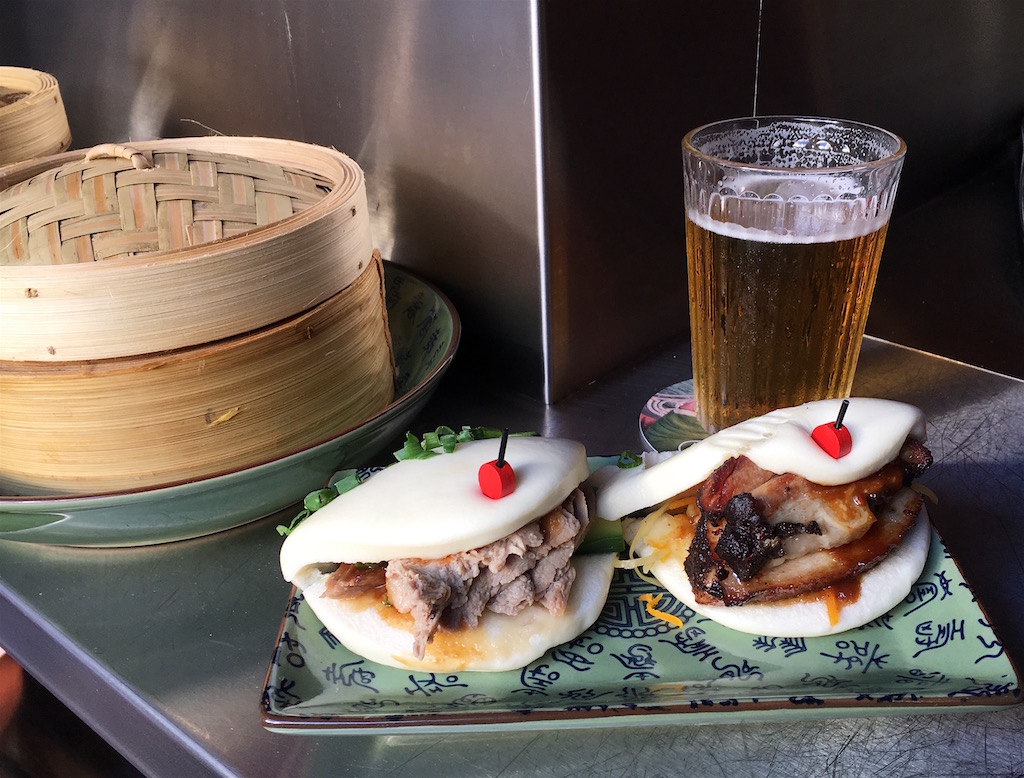 We sat outside but it would be also be fun to eat at the long bar overlooking the open kitchen of steaming pots. In the evening, the back terrace was transformed with a retractable glass awning and fun lighting, creating a very cool spot for sipping one of their exotic Asian-inspired cocktails. 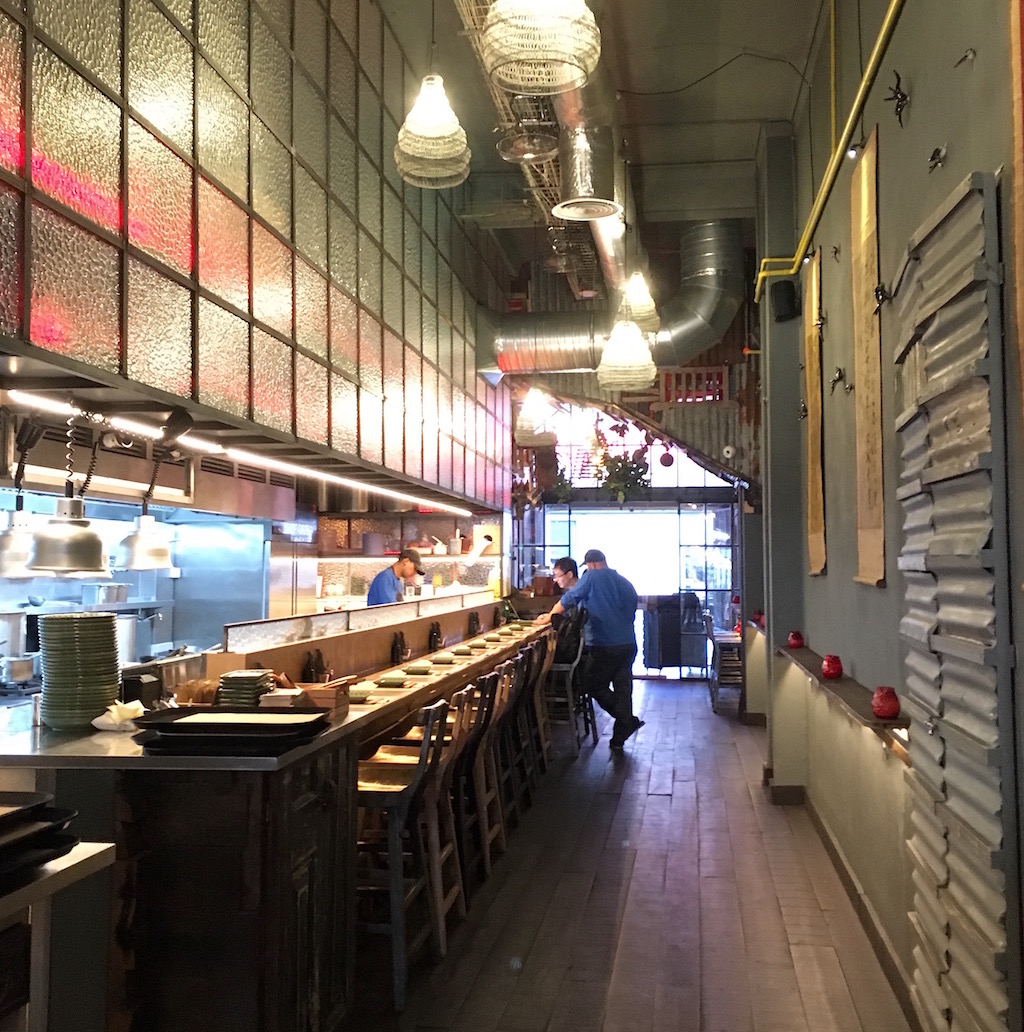 The open kitchen bar at Boa-Bao

The first Boa-Bao opened in Lisbon in 2017, then the Porto location followed in the summer of 2018 and the local foodies were very excited about it. Boa-Bao was recommended to us by locals more frequently than any other restaurant.

Who says food can’t be fun? or even challenging? At Cruel the menu is divided into three sections depending on your food courage: Fearful, Cautious, or Cruel. Most of the dishes are meant to be shared, so you can spread the fun, or the pain, depending on how you look at it. We had some tough choices to make, because so many things looked interesting. Feeling brave, we ordered solely from the cruel section. 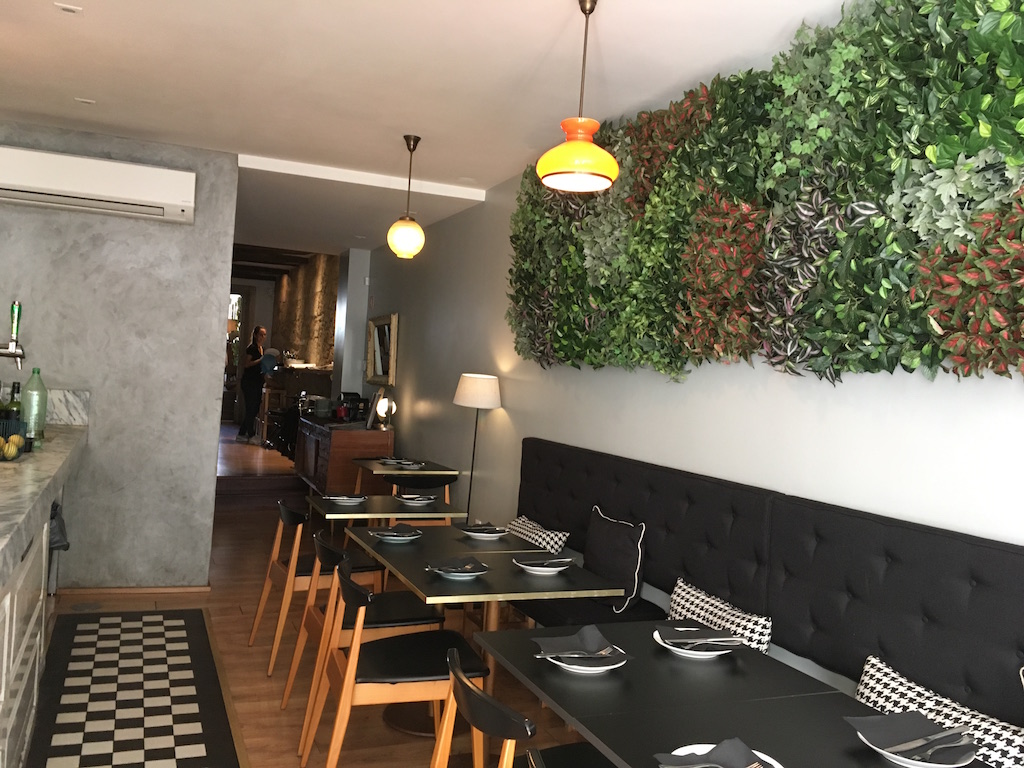 We started with the Beef Carpaccio with Electric Flower. The carpaccio itself was mild, thinly sliced veal topped with arugula and shaved parmesan and pesto sauce. Pretty basic. To the side sat two spoons, each holding a small dried flower. (Spoiler alert – stop reading here if you don’t want the surprise ruined) We were instructed to taste the carpaccio first, to see how it tasted. Then, eat the flower, chew it up good and swish it around in the mouth. Suddenly my mouth came alive with a sour bite that got the saliva flowing along with tingly numbness. After that, the carpaccio seemed more flavorful and vibrant. The secret is the jambu flower, a medicinal and edible flower from Brazil that is also called “electric flower”.

The effect went away after just a few minutes, so our palates were back to normal in time for the next dish: Wood fire black boar roast beef (actually, pork) with Thai sweet sauce. Each slice was seared on the outside and nearly raw inside. This boar was so tender and flavorful that we immediately wanted another. But, we had more food coming. 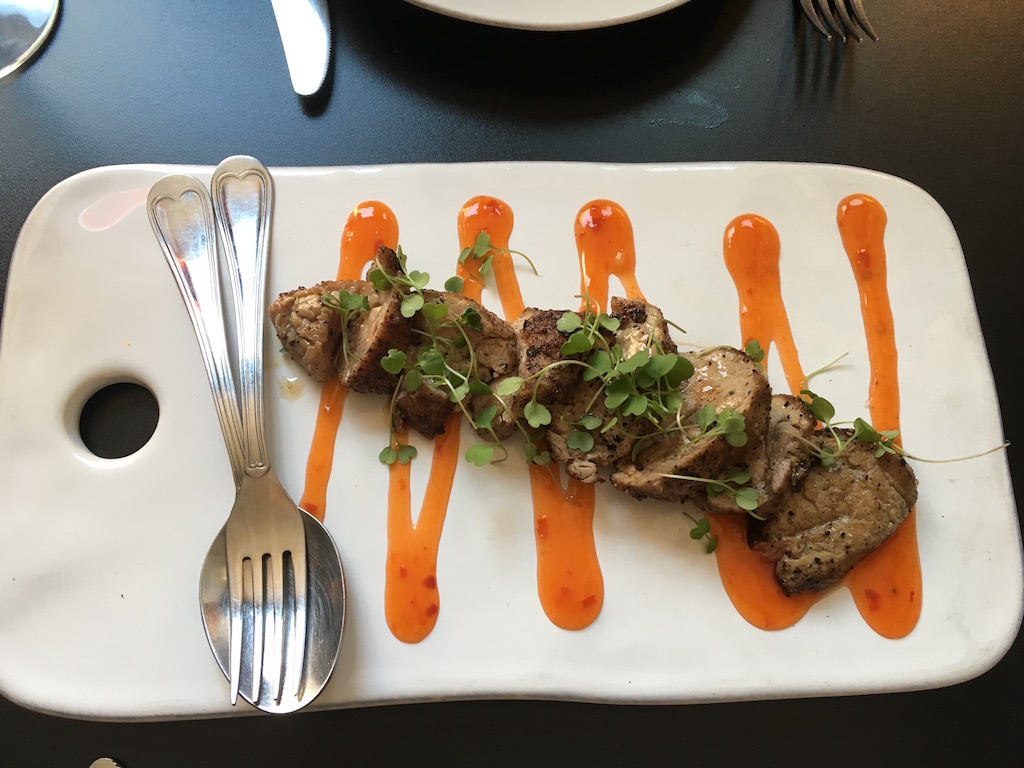 The steak tartare, called Novilho crú(el), was similar to the carpaccio but with a different twist. Break the egg yolk and mix it into the tartare. Taste a bite. Take the shot of Jambu Cachaça, a Brazilian spirit made with jambu flowers, and swirl it in your mouth for 5-10 seconds. See what happens. If I had to choose just one, I would say that the tartare was a more pleasant experience. But then that wouldn’t be cruel, would it? The spicy poppadum crisp bread was a nice touch. 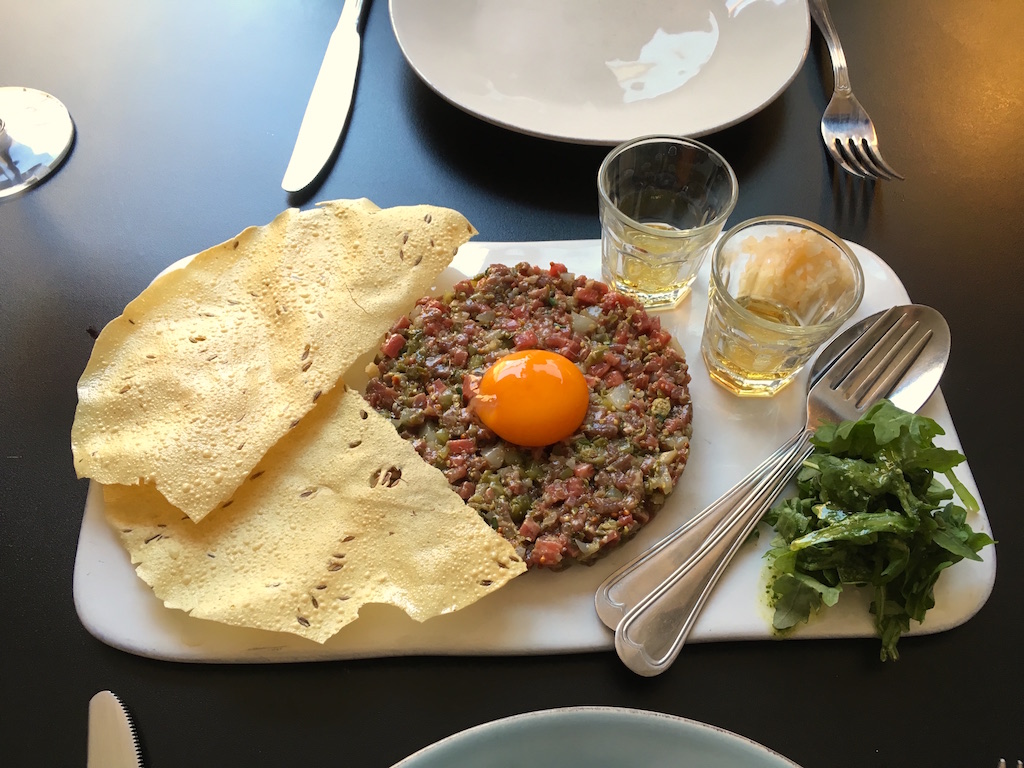 Next, the Mushroom Magic Risotto was a hearty dish. The rich creamy risotto loaded with mushrooms was alive with flakes of smoked fish writhing in the air. They weren’t just visual but added a nice saltiness to the dish.

And when dessert time came around, we knew exactly what it would be – a second round of that spectacular black boar. We just couldn’t help ourselves.

Two streets over from Rua da Picaria, Aduela Taberna sits under a big olive tree on Rua das Oliveiras. One of our Uber drivers recommended it to us and we were very thankful. On our way to Candelabro, he said that if we wanted to try some great Portuguese wines we had to go to Aduela. It was a nice find that became one of our favorite spots.

They had about a dozen wines by the glass at very affordable prices ranging from €2 to €3 euros. Our server was very knowledgeable about their wines and helped us choose from among their selection of red wines from the Alentejo region of Portugal that we enjoyed outside on the patio.

The menu includes small plates and meat/cheese boards, but our favorites were the Tostas Abertas. These open sandwiches came as either a single or double portion. We liked the buffalo mozzarella, arugula, and pesto; shiitake mushrooms and brie cheese; and hot cheese, smoked ham and cherry tomato. With two slices of toast of each and loaded with fresh toppings, we found the single portion size to be plenty to share.

If you like this article, take it with you to Leon by downloading the GPSmyCity App for your mobile phone or tablet.