For the Freshest Fish in Porto, Head to the Harbors

In the months leading up to our trip to Porto, I had been dreaming of seafood. Portugal is a seafaring country with a long tradition of fishing, so they are well known for their fish and seafood. The Portuguese have the highest seafood consumption per capita in Europe, estimated at 56 kg per year. Octopus, goose barnacles, clams, sardines…you name it, I couldn’t wait to have it. The fresh fish grilled outdoors over a glowing bed of charcoal was the best, simply seasoned so that the delicate flavor of the fish shined through. 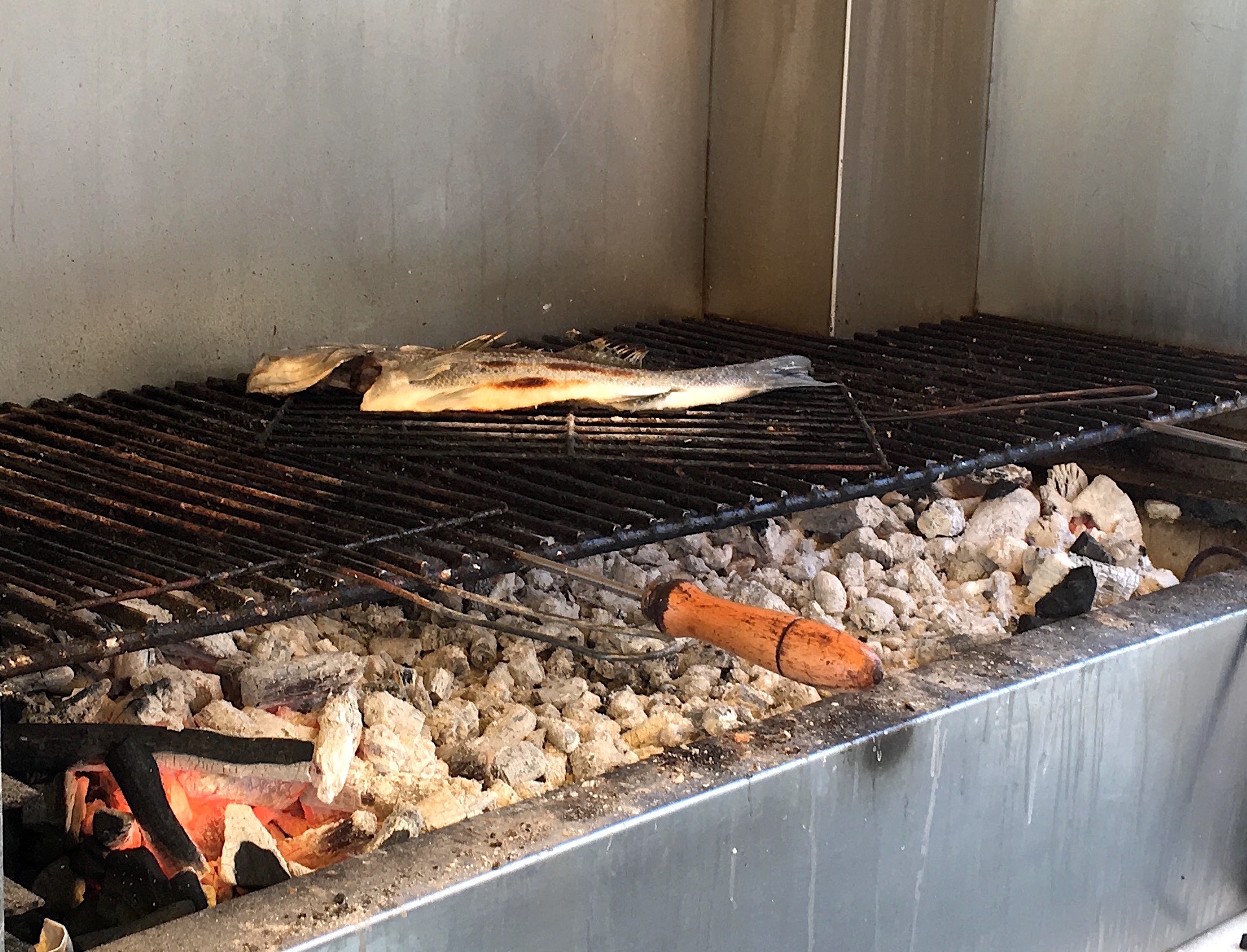 We were repeatedly told by Porto locals that to get the best fish and seafood, we had to go to the beach. Most often, they meant the seaside city of Matosinhos, which is about 8 km from the center of Porto on the Atlantic coast. A closer and more charming option is the fishing village of São Pedro da Afurada, located just on the opposite side of the Douro river in Vila Nova do Gaia.

Matosinhos is a separate city, still in the district of Porto, out along the Atlantic coast. It is easy to get there by bus or metro. The Praia de Matosinhos is the largest beach in the area and where the locals go to surf the waves and soak up the sun. The beach is next to the commercial Port of Leixões, which is the main commercial port of northern Portugal. Fresh seafood straight from the fishing boats can be found in the Mercado Municipal de Matosinhos.

Matosinhos makes the bold claim of having the World’s Best Seafood which they are not shy about promoting. If you are thinking of going, it really is worth checking out the MatosinhosWBS website. According to the website, there are approximately 600 restaurants in Matosinhos. Impressive for a small city.

We decided to let our eyes choose our lunch destination, so we arrived in Matosinhos early for lunch and did some seafood window shopping. We walked around the streets just behind the harbor, where the best restaurants are supposed to be found. Most of them are small, low key restaurants with outdoor grills along the sidewalks. There’s nothing fancy here. One of these restaurants had a box of fresh sardines sitting nearby, glistening in their bed of ice, waiting for the grill that was built into a nook in the front of the building. The charcoal was still piled in the middle of the grill, not quite ready. We continued our tour around the harbor checking out other restaurants, but we couldn’t stop thinking about those sardines.

It wasn’t long before the smell of grilled fish started perfuming the air. We went back to the place that first caught our eye, O Robalo. The owner smiled and welcomed us inside; I think he knew that we would be back. The front window was now filled with a selection of various fish and seafood on ice.

We picked out a beautiful sea bass, which they brought to our table for our approval, making sure to show us the gills to verify its freshness. The fish was priced by the kilogram, so we didn’t know the weight until the bill came at the end. Our fish was 1.2 kg, about 2.6 pounds. At €34.90/kg, it came to €42 euros.

For starters we ordered some clams and grilled sardines. At this point, we didn’t understand just how much food we would be getting. A salad of tomatoes, onions, and roasted green peppers was put on the table with bread and some little cod cakes called bolhinos de bacalau (a €4 charge for these showed up on our bill along with a €2 bread charge.) 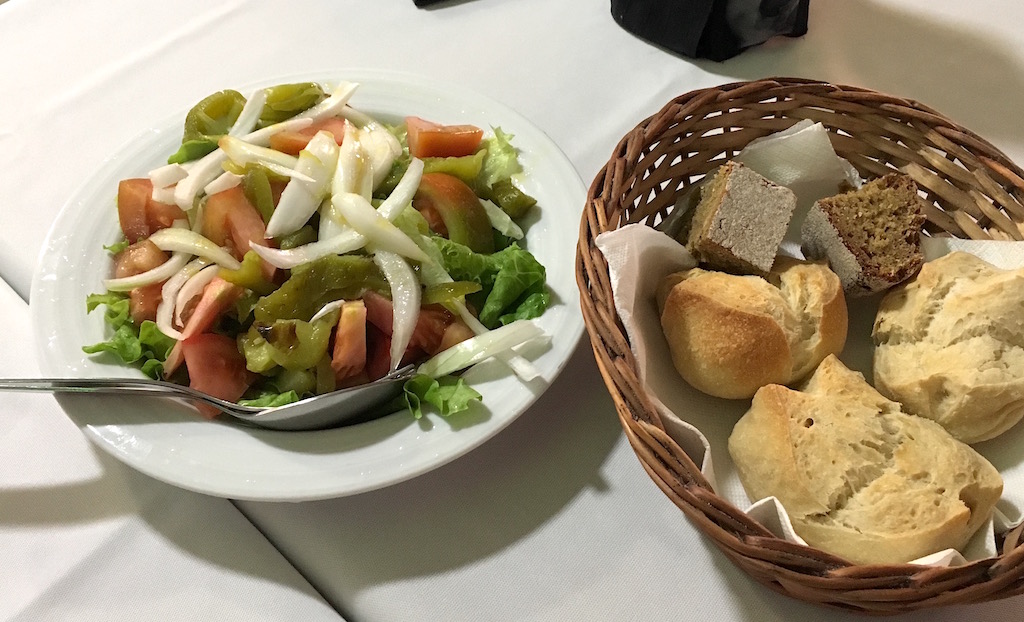 The sardines came as six whole grilled fish, generously salted with rock salt. With nothing else but a squeeze of lemon, we absolutely love them. The ability to get these sardines is one of the things I will miss most about Spain and Portugal.

The clams were also priced by the kilogram. We got a huge 0.6 kg bowl that came to €17. They were called Ameijo do Algarve, meaning clams from Algarve, which is the southernmost region of Portugal. The tender clams were small enough to pick up and eat with your fingers, using the shell like a spoon to collect the sauce of garlic and parsley.

When the sea bass was finished on the grill, it was brought to the table along with a bowl of boiled baby potatoes. The owner himself served the fish, removing the bones and spooning out the filets onto plates for each of us. The meat was moist and flavorful. This is the advantage of cooking a fish whole; the skin and bones add flavor and juices to the meat.

A local family at the table next to us had ordered a red snapper baked in the oven, one of O Robalo’s specialties. Despite our insisting that we were already full, they were determined to share and plated each of us a portion. We enjoyed a lively discussion about their home city. Thanks to their warm welcome and friendliness, we will remember this as one of our best meals in Porto. O Robalo is their favorite local restaurant for fish, so it seemed that we chose well.

São Pedro da Afurada is a fishing village in Vila Nova de Gaia near the opening of the river to the Atlantic ocean. Walking through the streets of Afurada, we got a glimpse of traditional Portuguese life. Colorful tiled houses nestled up to the wharf, where fishing boats docked. Laundry dried in the sun on ropes next to communal laundry tanks where local women still wash their clothes. Afurada residents were getting ready for lunch, setting up tables and grills along the street in front of their homes. 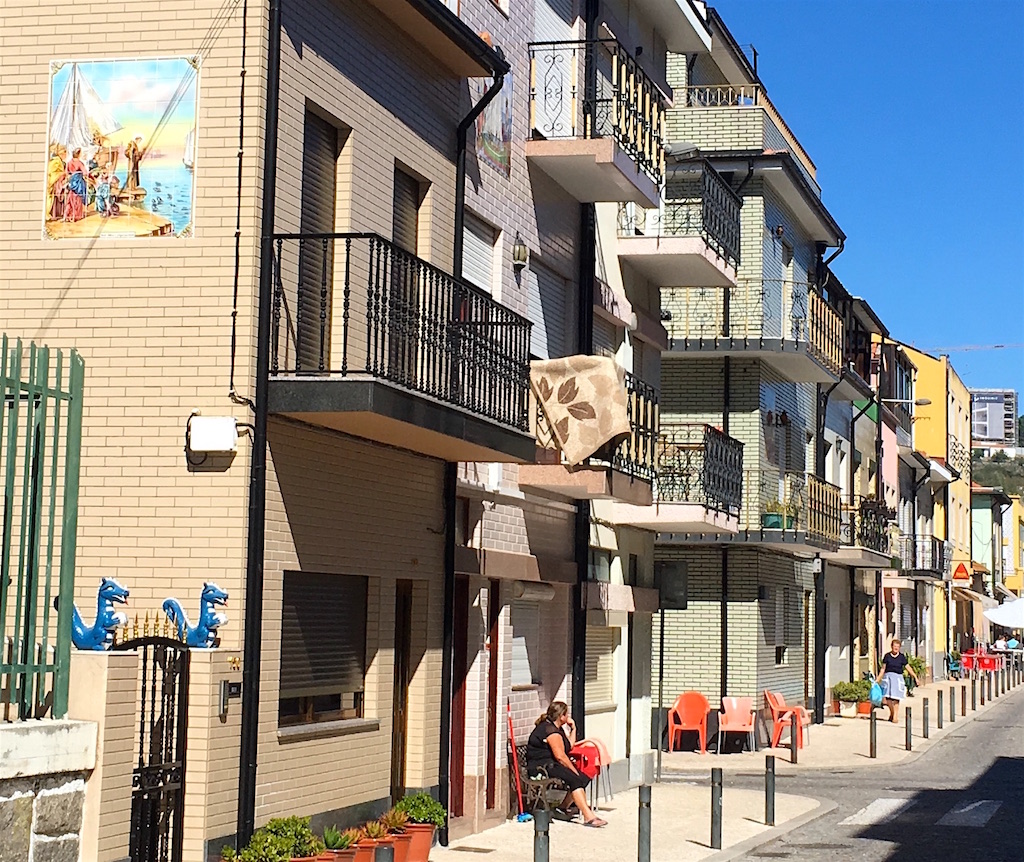 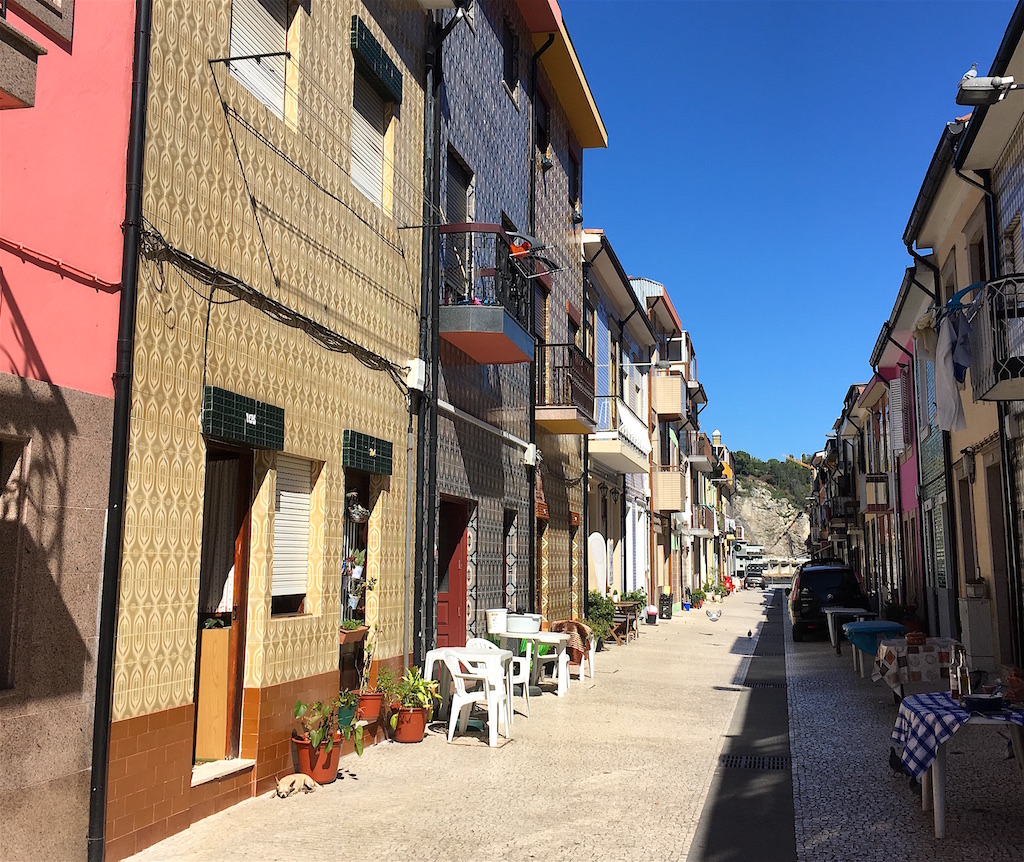 Nearby along the water is the very modern Douro marina (Marina da Afurada), a facility with mooring for 300 boats. There are several restaurants along the marina with a view over the river. This is where we met up with a sailboat for a cruise along the river (more on that lovely evening of sailing here).

We repeated our strategy of exploring the neighborhood before lunch to check out all of our options. Like in Matosinhos, the seafood restaurants were easy to find. Just follow your nose and look for the plumes of smoke coming from the sidewalk grills.

We selected a restaurant on one of the backstreets called Armazém do Peixe. We liked the big open dining area and large terrace. The fish on display looked very fresh and they had turbot – one of our favorites. The fish was priced according to a range of weight so it was easier to judge what our final bill would be. We ordered a turbot (rodovallho in Portuguese) in the 800gr/1200gr range for €40. 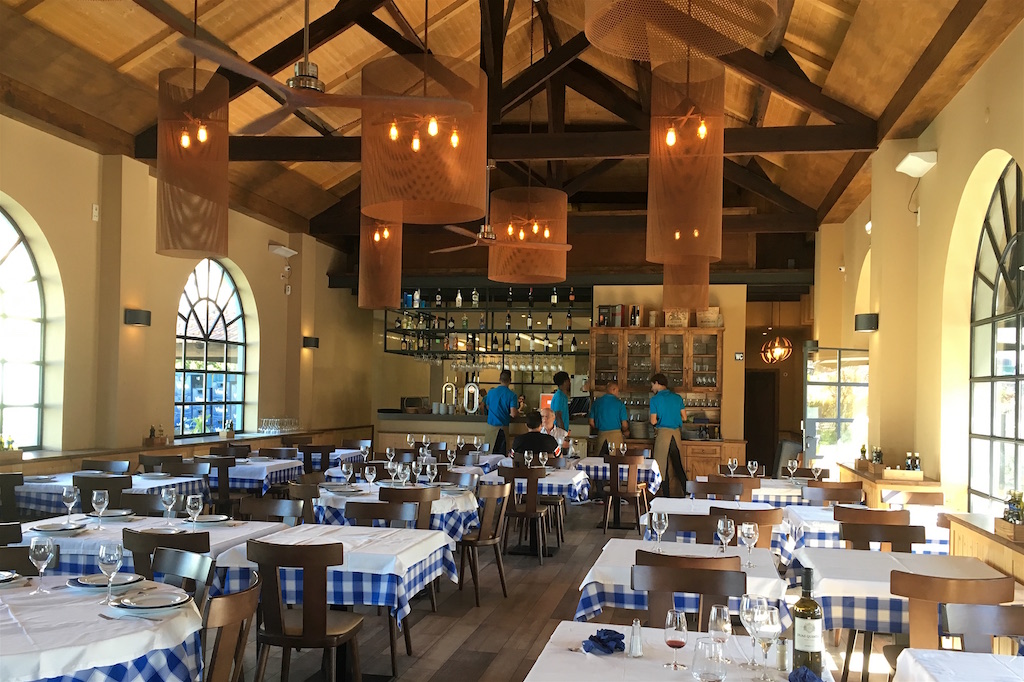 While we waited for our seafood, they brought a bowl of olives, bread, and some very nice cod cakes. As before, we were charged for some of those extra items: €2 for bread and €3 for the olives.

The fish was grilled over the charcoal grills in front of the restaurant and served whole, seasoned with just olive oil, lemon and parsley. It was up to us to dig into the big meaty turbot. While I do appreciate the courtesy and convenience of having a fish deboned and served tableside, it always tastes best when I can flake it off the bones myself. But that’s just me. Not everyone cherishes the lingering scent of fish on their fingers.

The fish came with the usual bowl of boiled potatoes, so we would have had plenty of food for the two of us. However, on impulse we had also ordered a skewer of shrimp and squid. It looked impressive, but we wouldn’t do it again. The shrimp were great with the heads intact and full of flavorful juices but the grill was too much for the squid, which came out tough. The accompanying olive oil, however, was delicious. Packed with chunks of garlic and parsley, we spooned it over everything, including all of those potatoes. Our meal came to a total of €91, which we thought was pretty good considering it included a bottle of wine and two glasses of port wine for dessert.

Wherever we went for grilled fish in Porto, the routine was the same. Fresh whole fish was displayed on ice so that you could see what was available. The fish was priced by weight. It was accompanied by boiled baby potatoes and maybe a salad. Other items showed up on the table, like olives or cod cakes. There was usually a charge for some of those extra items added onto the bill. We didn’t mind. We’ve learned by now that when things show up on the table that we didn’t ask for, there is probably going to be a charge. We ate and enjoyed everything that they brought us because we wanted the full experience.

And what an experience! If I had to choose only one way to prepare fish, it would be grilled whole over a bed of coals. I just wish it was easier to find whole fish like this back in the United States. The Portuguese have been doing this for a long time and they know what they are doing. It was a luxury to find so many restaurants dedicated to fresh grilled fish and seafood. It is quite possibly my favorite thing about Portugal.

2 responses to “For the Freshest Fish in Porto, Head to the Harbors”