A day trip to Xátiva last Spring convinced us that there was a lot more to this town than we could experience in one day. Importantly, our favorite Spanish craft beer brewer is located in Xátiva. We finally returned to take a tour of the La Socarrada Brewery. This time we were armed with friends and stuck around to see how much fun we could squeeze out of this small pueblo.

There are Renfe C2 line trains from Valencia to Xátiva approximately every 30 to 60 minutes throughout the day. A 9:23 morning train from Valencia Nord station arrived in Xátiva at 10:12 with just enough time to grab a quick coffee and croissant at Tipics cafe before heading to the brewery.

The name of the brewing company is actually Premium Beers from Spain, but they are commonly referred to by the name of their leading beer, La Socarrada Cerveza Artesanal. At the time of our visit, La Socarrada only gave one brewery tour and tasting per week. It is on Saturday mornings at 11:00 a.m. Tours are €6 by appointment only and demand is high, so we needed to book at least a month in advance.

Our tour guide for the day was brewer and co-founder Rafa Suñer. He and Sergio Iborra launched the business in 2012. The hour-long tour included the high tech brewhouse, fermenters and bottling room. The tour was totally in Spanish. With a little bit of Spanish and a good understanding of the beer making process (we speak the language of brewing) we were able to follow along. It was totally worth the language struggle to get to the tasting. Tables were set with platters of meats, potato chips, and other snacks. Full bottles of the beers we tasted were distributed to the tables for everyone to pour their own and Rafa lead us through each one.

What sets La Socarrada apart from other craft brewers is the way that their beers reflect the Valencian community that they come from. They are created to give a real sense of place. Er Boqueron is a refreshing blonde ale made with Mediterranean sea water, and the Orange Saison is a farmhouse ale that gets its citrusy flavor from Valencia’s famous oranges.

La Socarrada is an amber-colored golden ale brewed with rosemary that grows in the countryside and rosemary honey to complement the flavors of the local cuisine. This 2013 video of Sergio and Rafa talking about La Socarrada shows just how much affection they have for Xátiva and this beer. 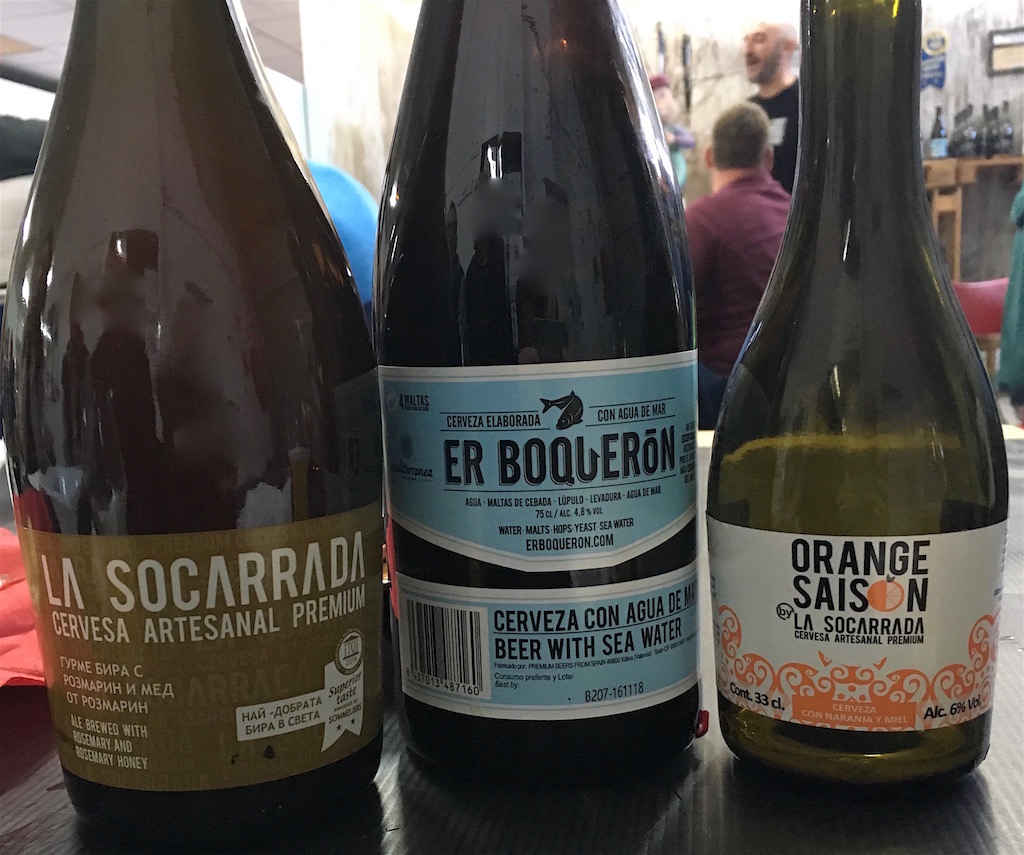 Rafa knew that we spoke little Spanish and came to our table regularly to make sure that we understood and to answer any questions. We left La Socarrada almost two hours after we began with a pleasant little midday buzz. Premium Beers From Spain is imported to some states in the US, so if you’re lucky you might be able to find it.

On our way up to the castle, we stopped off to check into our rooms at the Hotel Montsant. It is the swankiest, priciest hotel in town, yet still around €100 euros per night for some of the rooms (off season). The hotel is in a converted 14th century monastery once occupied by Cistercian nuns with the castle looming overhead. 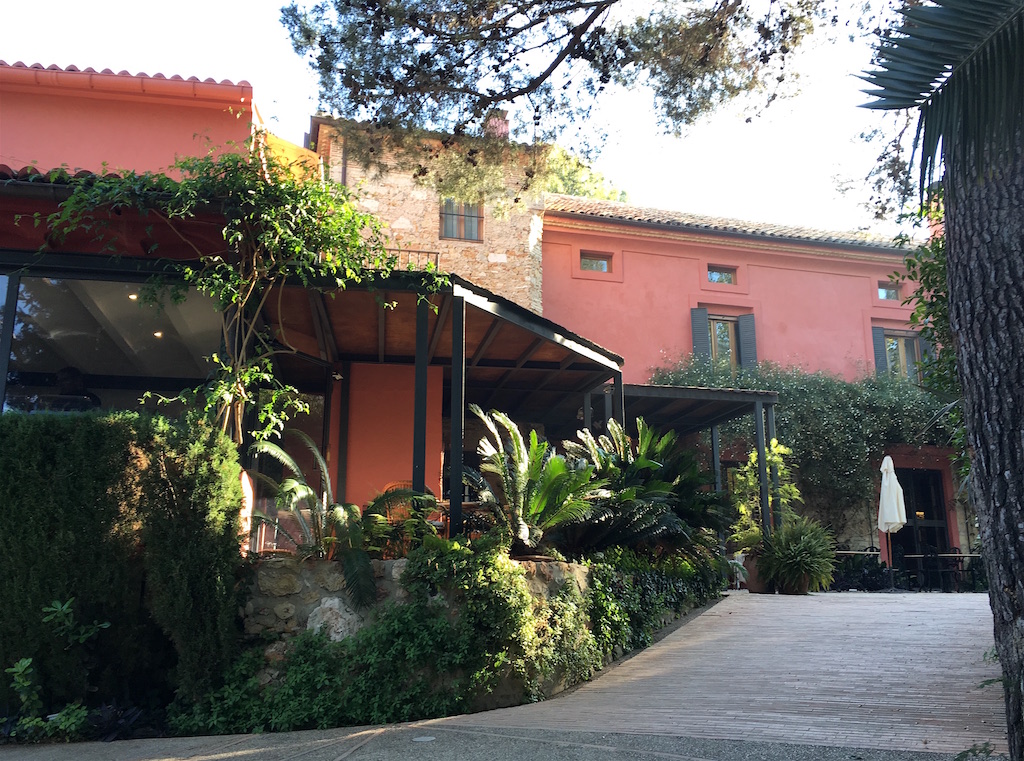 There are rooms within the original monastery building and others in wooden cabanas spread out among the trees. We stayed in one of the cabana rooms, which was large, modern rustic with a private terrace that hung over the gardens. We were there in late November and it was quite cold but we could see that the outdoor spaces with a pool, gardens and terrace would be great during nicer weather months. There is also a very nice restaurant in the main building.

We easily made it to the castle in time for lunch, where we had reservations for a table on the terrace of the Restaurante El Mirador del Castell. The restaurant is located at the entrance of the castle. 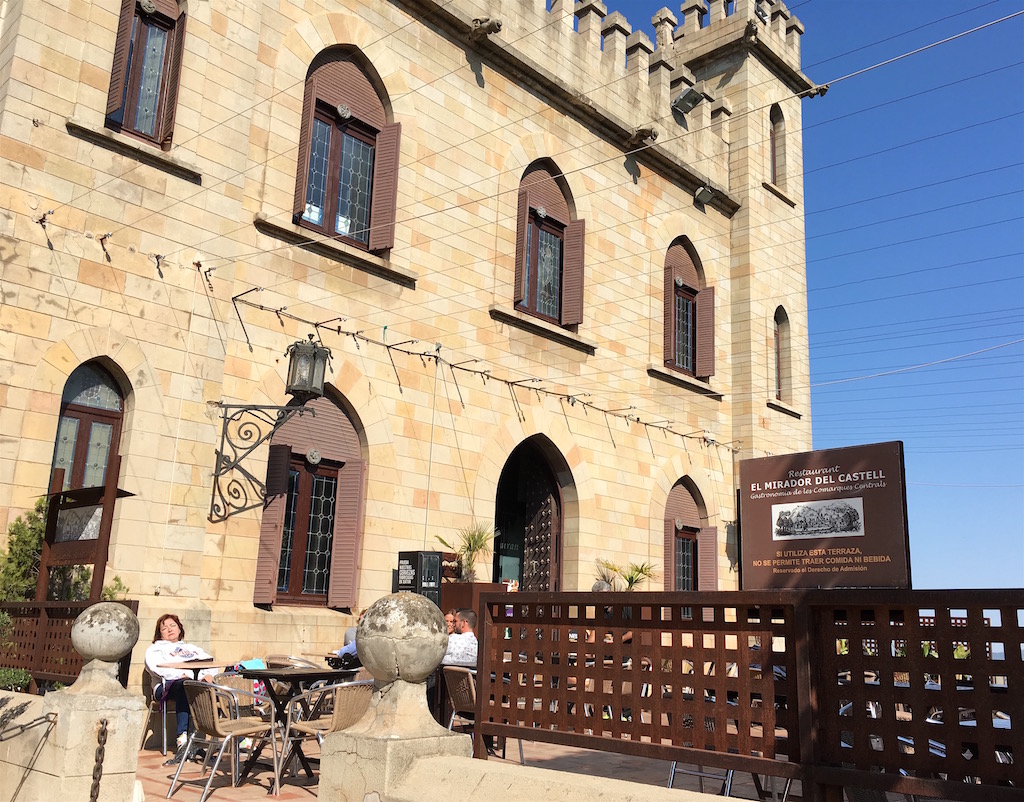 The food was simple but satisfying. For lunch they serve a €15 menu del dia that included a salad, a baked rice dish, and a dessert with coffee. There were no options – the menu is the menu and thats what you get. It’s not the best meal in Xátiva, but you can’t beat the location for convenience to the castle and the view over the city. We ordered a bottle of vino tinto – the server asked if we wanted the “normal” or the good one. We went for the good one which turned out to be a nice bottle of Nodus Summun tempranillo, cabernet sauvignon, and merlot blend.

We had a gloriously sunny day for a hike around the castle. We took in the beautiful views over the city and countryside and explored the nooks and crannies of the castle that range in age from pre-Roman to medieval times. (see our post on a Day Trip to Xativa for more photos)

The midday siesta shutdown is taken seriously in Xátiva and the streets close up at 4pm, so there is not much to do but chill out for a few hours. After a pleasant snooze at the Montsant, we headed into town to check out the local life. 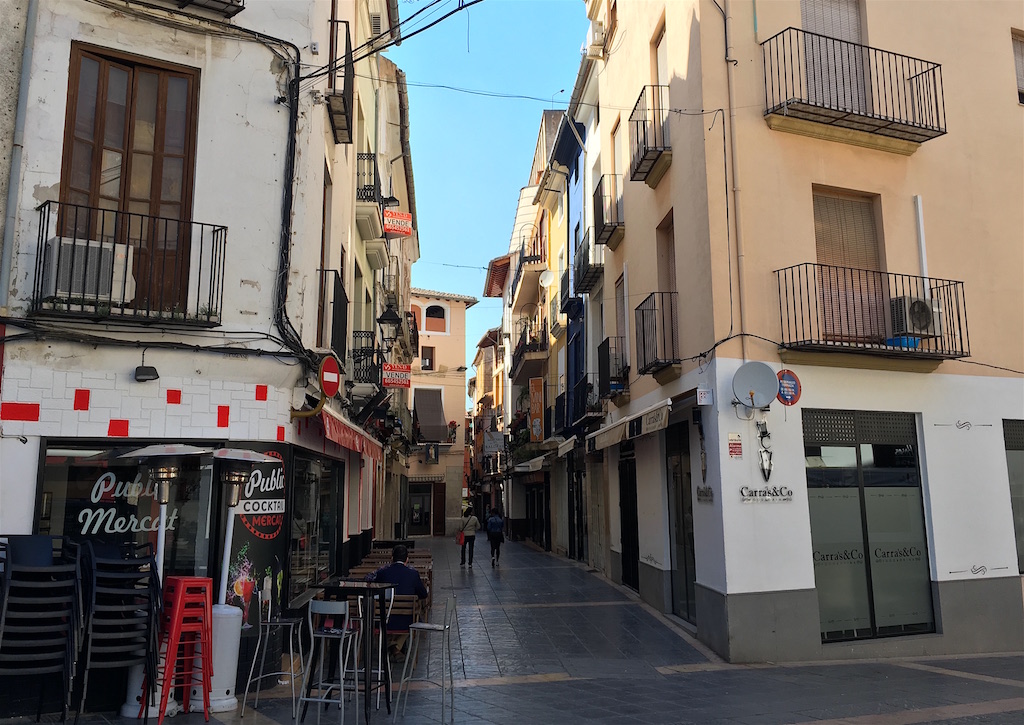 It was a 15 minute walk down the castle road to the Plaça Mercat at the heart of the historic city center. Bars and restaurants encircle the plaza and line the surrounding streets. We arrived at gin tonic time and people stood outside in the street with their cocktails socializing. It was a pleasant surprise to see so much activity. We grabbed some cocktails of our own and joined the crowd. 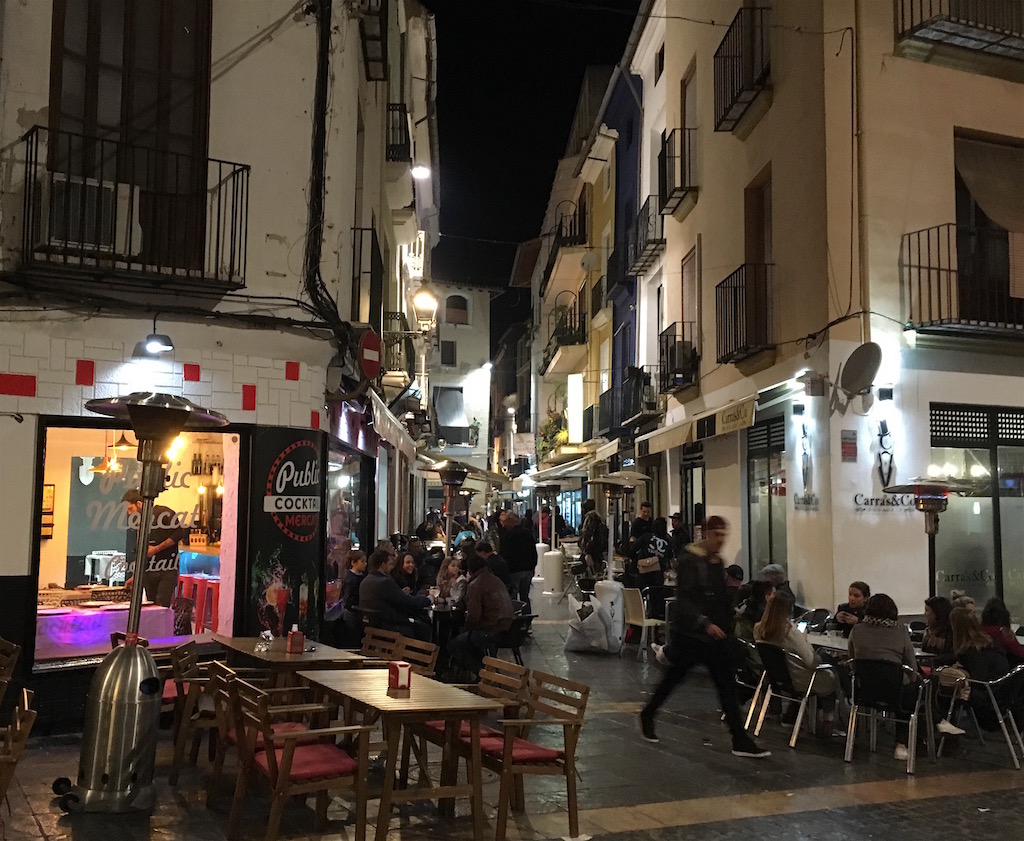 There were plenty of tapas bars in the area surrounding the Plaça Mercat and we sampled some pinchos at a few of them. El Gourmet del Socarrat was one of the most interesting restaurants with two separate spaces: a restaurant and a tapas bar. We selected from the pinchos at the tapas bar, filling our plates with bread topped with shrimp, tortilla, rare beef, and big slices of foie gras. 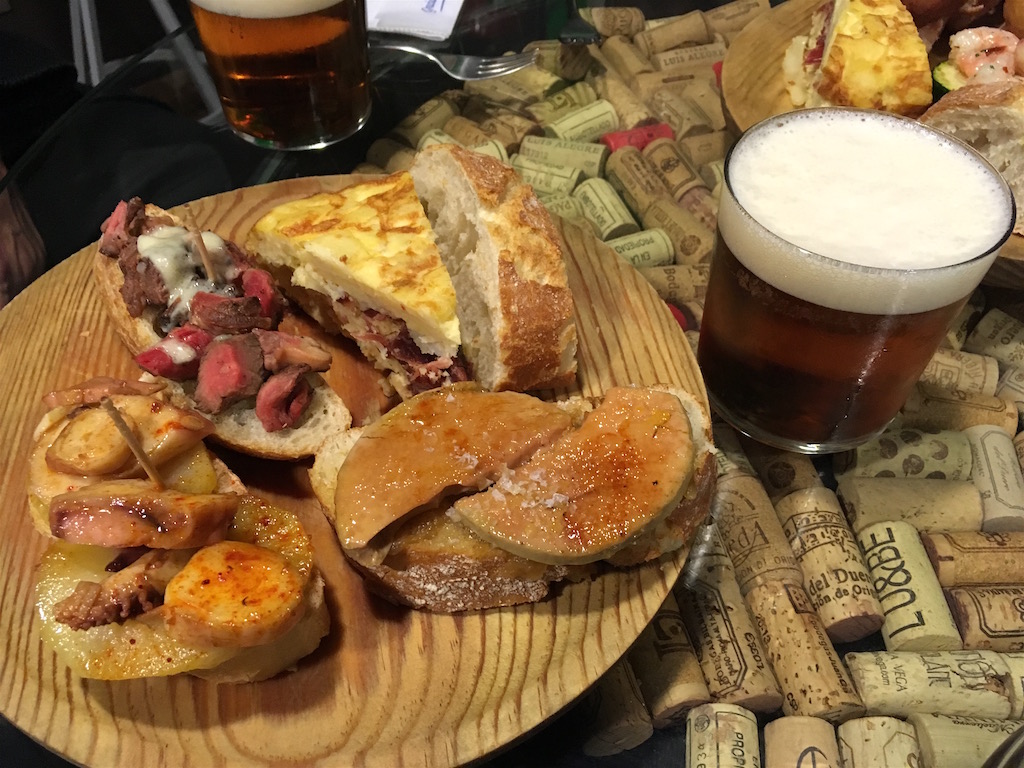 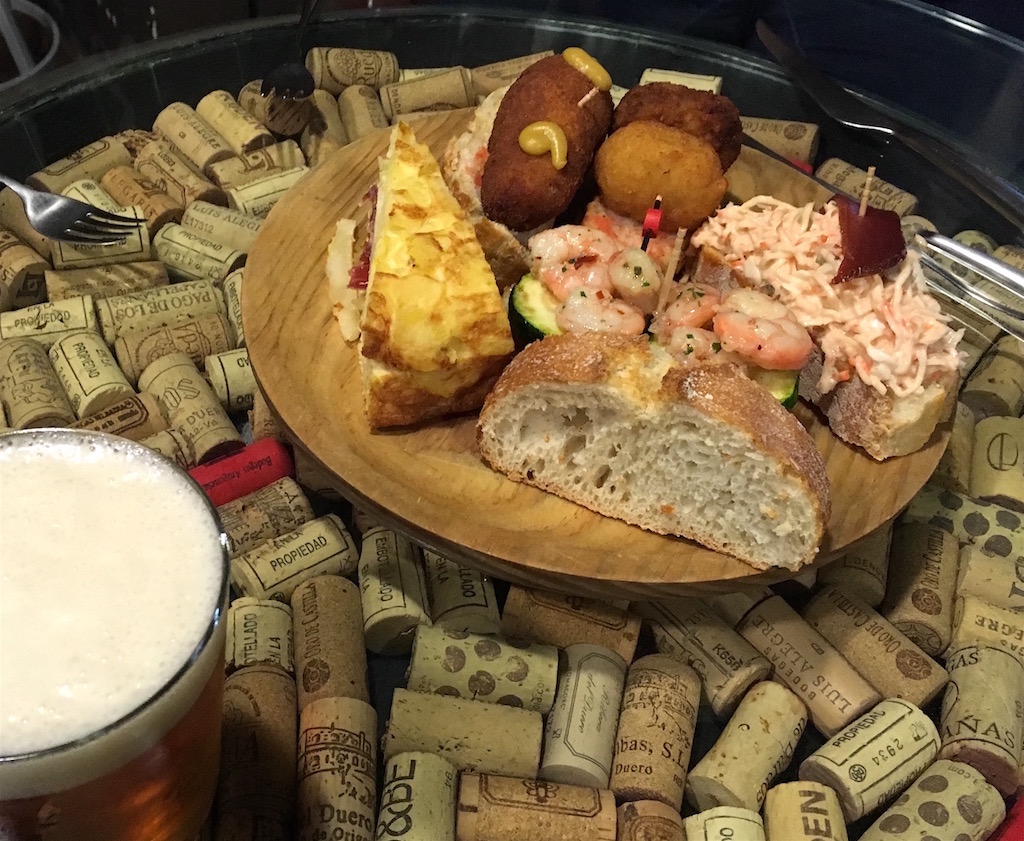 We ended the evening at El Minibar where a very enthusiastic DJ was spinning classic 80’s music. The entire bar was vibrating with the upbeat tunes. Time slipped away and before we knew it, it was after 1:00 am – well past the time we turn into pumpkins. When it comes to squeezing fun out of a small town, Xátiva makes it easy.

Ending the night at El Minibar