A Street of Tapas Bars in El Grao, Valencia

We’ve been on a seaside kick lately, developing an affection for the quiet streets and the funky, unpretentious neighborhood bars of Valencia’s Poblados Marítimos (Poblats Maritimos) district. The El Grao barrio (called El Grau in Valenciano) is part of the maritime district. It is a small barrio sitting next to Cabanyal and incorporating the sea port of Valencia.

On nice days, we like to head to this one particular little street: Calle Cristo del Grao (Carrer del Crist del Grau in Valenciano and on Google Maps). It’s just a single block long running between the Parròquia Santa Maria del Mar church and the Mercado del Grao. A string of tapas bars on the street opposite the market bring life to an otherwise isolated street. Each bar has large windows out to the sidewalk and tables on both sides of the street. On clear days, the tables are bathed in sunlight. 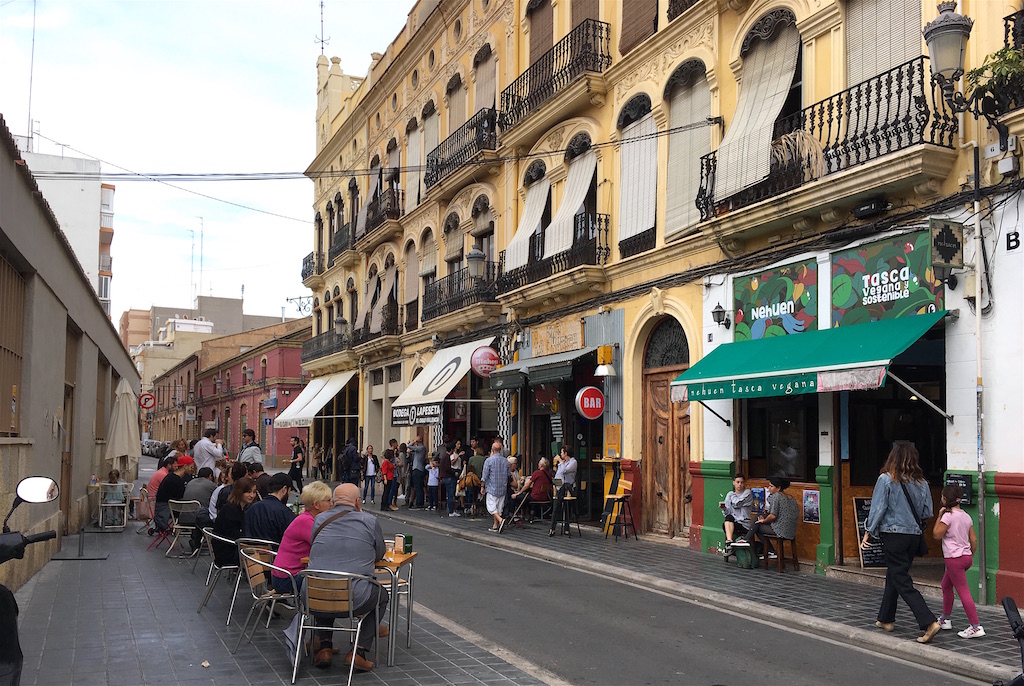 At the center of this activity sits the sleepy Mercado del Grao. It is the oldest working market in Valencia, but at present there are only four open stalls doing business. That is all going to change with a €2.4 million euro investment that is going to revitalize the market with 24 new stalls, bars, and a garden area. It’s supposed to happen by Spring 2019. After that, this area is really going to come alive.

These tapas bars have a head start on the fun: 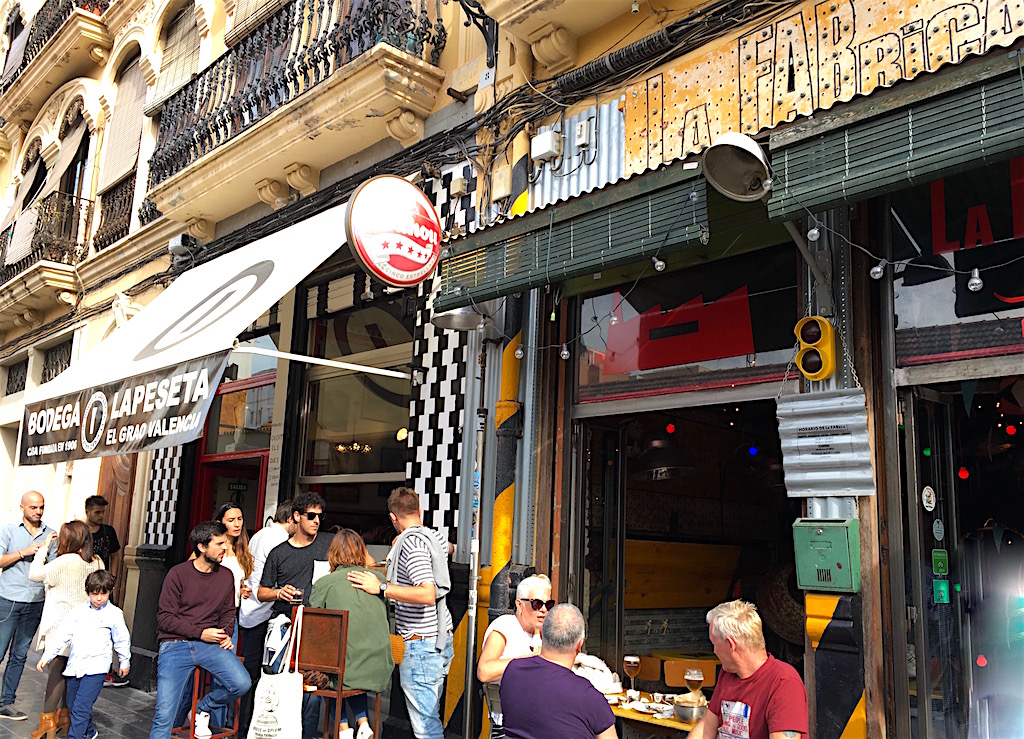 Patrons gather outside of La FABrica and Bodega La Peseta

For the most interesting food on the street, we like La FABrica. Owner Emilio Gonzalvo is a designer who also has an interior design business (La Fábrica Vintage) that specializes in vintage furniture and styles from the 50’s and 60’s. In 2015, Gonzalvo transformed an empty ruin of a building with sandy dirt floors into a space full of color and sparkling lights. The restaurant’s decor could be described as vintage workshop, in honor of the factories that used to fill this neighborhood. Industrial lighting drapes across the room and tools hang on the walls.

The unique wine list branches out beyond Spain with selections from Chile, South Africa and even one from Lodi California. Alhambra cerveza is the beer on tap. Drinks come with a free tapa of their choosing, usually a piece of bread topped with something tasty. This practice, although common in southern Spain, seems to have expired in most of Valencia city so we were happy to see it at the bars on this street.

In the open kitchen, Gonzalvo’s wife Ana is the chef, creating simple but delicious food. The menu has a selection of tapas, toasts, sandwiches and a few larger dishes to share. The tender chipirones a la plancha con jamon (grilled sepia with ham) are lightly grilled and tossed with salty ham and a parsley infused olive oil.

Don’t forget to check the specials on the chalkboard. One of the chefs is from Mexico, and you will see a lot of Mexican influence in the menu. The corn tortillas are really something special. On one night, the tacos surtidos (assorted tacos) included a taco of succulent codillo (pork knuckle) with a spicy hot sauce and one of morro (pork lip). Wrapped in those delicous fresh warm corn tortillas, both were estupendo!

One Saturday each month, La FABrica has music sessions at noon with a DJ spinning soul, jazz and funk. Check their Facebook page for upcoming music. Also, La FABrica is dog friendly, welcoming well behaved dogs inside the bar.

For a more traditional Spanish taps bar scene, head next door to Bodega La Peseta. This is the old timer on the street. It was founded as a winery in 1906 and is now owned by Javier Fortuny (who also owns the bar La Paca in Cabanyal). The atmosphere is fun and lively and lots of people want to be there. If you want to get into La Peseta on a weekend for lunch, get there early. The last few times we arrived at 12:45, a mere 15 minutes after they opened at 12:30, the place was full. We just managed to slide into two seats at the bar. 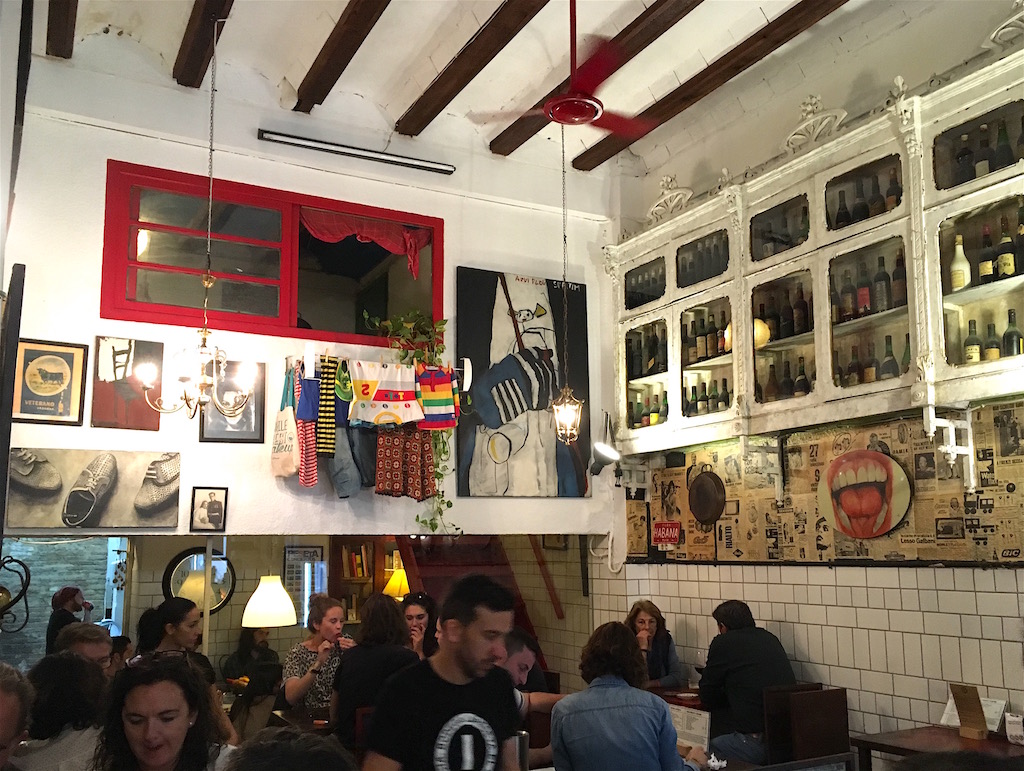 They make a nice house vermouth (vermu casero) and also have a selection of about seven vermouths from the bottle. Mahou beer is served on tap. Each drink comes with a complimentary tapa, sometimes toast with tomato and sardine and another time it could be a square of tortilla. The tortillas are one of their specialties and several sit on the bar. The tortilla with sobrasada sausage and gooey chunks of queso is especially delicious.

We saw bowls of caracole (snail) shells scattered along the bar and thought that anything so popular deserved a try. We frequently see these guys crawling around in the morning after a good rain, but at La Peseta we tugged them from their shells with toothpicks and slurped them down. Caracoles aren’t usually my favorite, but these were served in a nice spicy sauce with bits of chorizo. For being simple garden snails they are pretty darn good.

Note that getting service here can sometimes be slow. The bar can get very crowded and it may take a while for one of the servers to notice you. 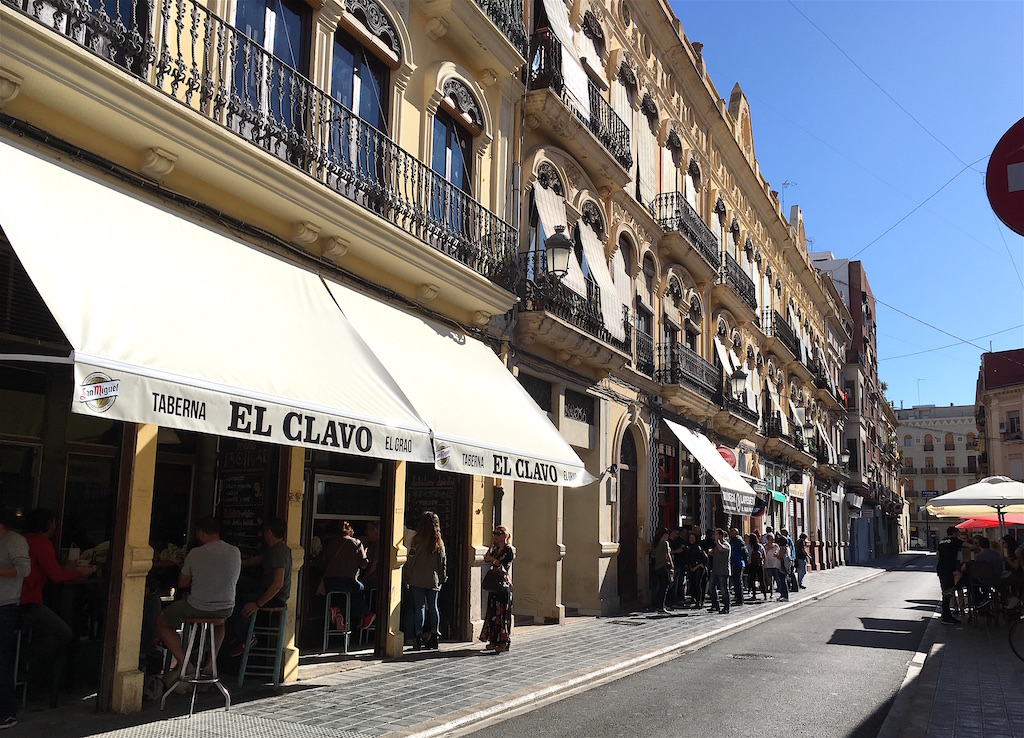 It may not look like it, but this is the newcomer on the street, just opening in September 2017. The space on the corner of Carrer del Crist del Grau and Carrer de Josep Aguirre used to be an old hardware store. The decor is a combination of vintage hardware and sea port. Large colorful paintings of seaside scenes brighten it up. Outside, people hang next to the big window sipping their €3 euro mojitos and margaritas. 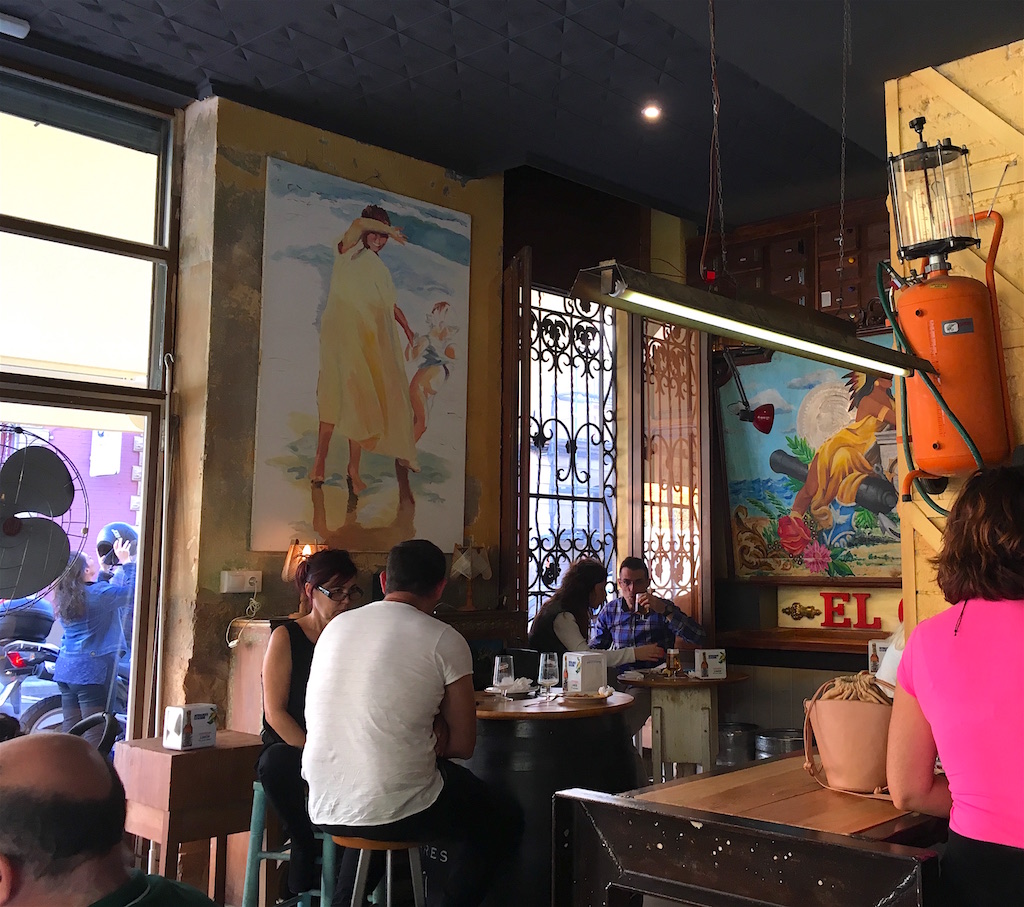 There was no menu at the time that we stopped in, just a handwritten list on paper, so we asked the server what they had that day. There is nothing fancy here, its all very traditional Spanish. They have mostly tapas, tortillas, some plates to share, and rice dishes. We sat at the bar and kept our order simple, with classic patatas bravas and some big, hearty croquetas de bacalao. 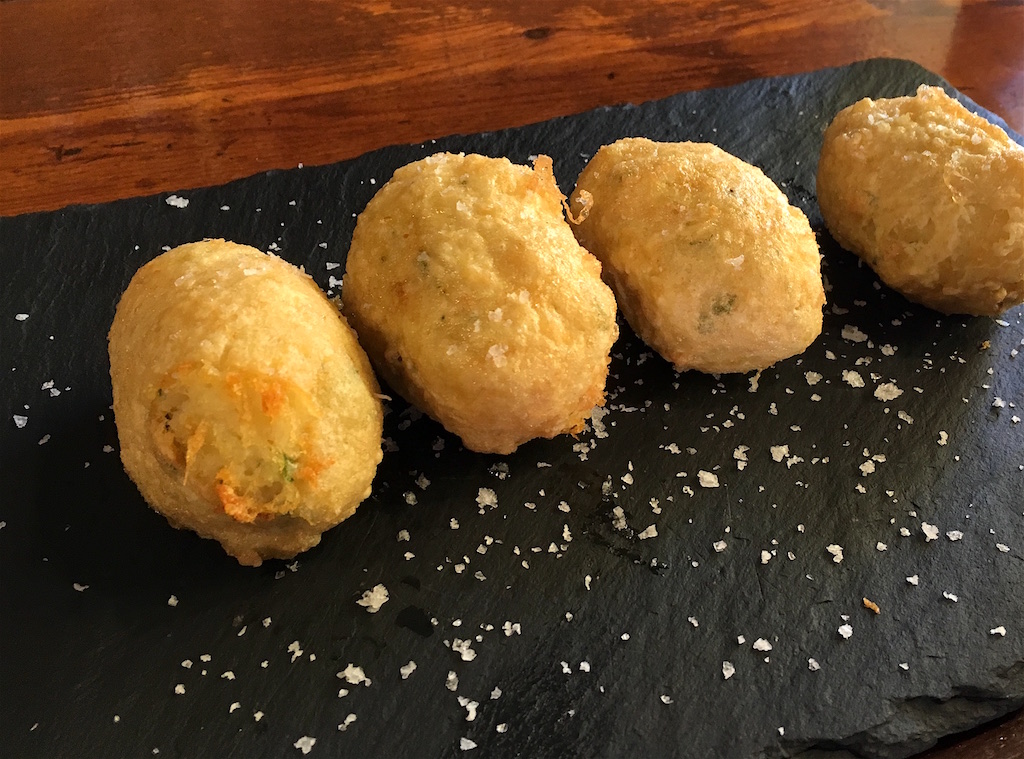 There is also a vegan restaurant on the street named Nehuan Tasca Vegana. Being the carnivores that we are (at least when eating out) we have not eaten there yet. Still, I didn’t want to leave them out because they get good reviews and it looks like a pretty cool spot. If you are looking for vegan food combined with reggae music, this might be your kind of place. Vegan Life Magazine was very impressed by Nehuan in this article.

Carrer del Crist del Grau is a 7 minute walk from the Maritim-Serreria metro station. You can also get there easily on one of several bus lines that travel along the Avinguda del Port.