Last year we published a food crawl in Frederick, Maryland, a historic city about an hour outside of Washington, DC. We returned to Frederick on our recent trip back to the states and were once again charmed by this towns ability to relax us. Long walks along Carroll Creek and through Baker Park, browsing the antique shops and boutiques, and sampling the many restaurants make this a great place to getaway for a couple of days.

Our favorite place to stay is 10 Clarke Place, if we are lucky enough to get one of the five rooms in this bed & breakfast. We have stayed here several times in the last few years, not only because of its location within walking distance to Frederick’s historic downtown but because just being there feels like a special getaway.

Monique and her husband Bob have beautifully restored this Victorian home to have modern conveniences while feeling like you’ve stepped back to a quieter time. Each afternoon there is wine, tea, and some sweet treat waiting in the drawing room. Unlike other B&B’s that we’ve stayed in, we feel perfectly comfortable relaxing on the antique furniture sipping wine. Everyone makes you feel at home, somehow achieving a balance between treating you like old friends while maintaining a professional manner. 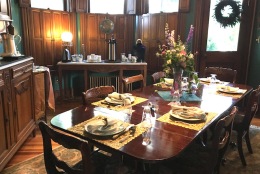 Their assistant Michelle has checked us in each time, giving a thorough introduction to the room and amenities. She is also the first person we see in the morning, ready with coffee and busy in the kitchen. The rooms are comfortable and amenities include everything you need, but the breakfast is my favorite part of our stay. Monique and Michelle create a three-course breakfast that is better than most restaurants.

Each morning began with a refreshing fruit smoothie, homemade from a different blend of fruit each day. The second course was a plate of malted chocolate waffles with freshly picked strawberries and sausage patties. I didn’t believe that I could possibly eat both waffles until I tasted them and realized that they were light as air. In fact, they disappeared almost immediately. 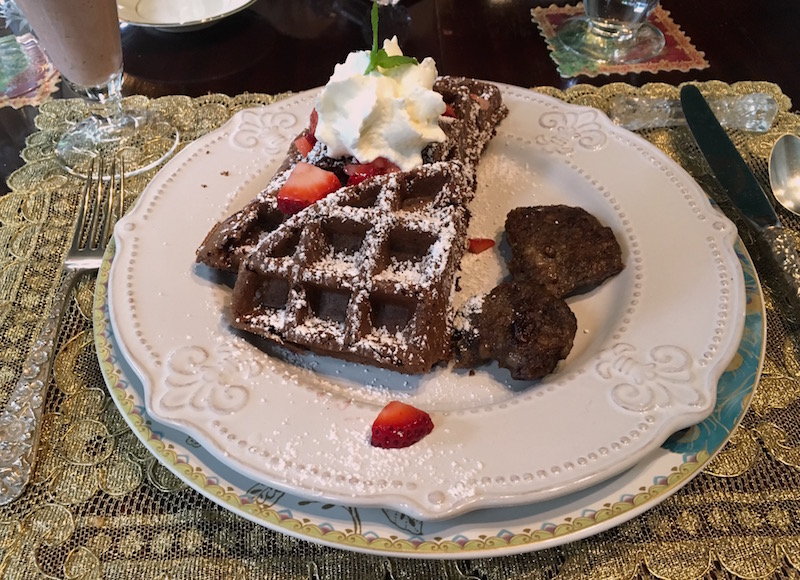 The finale was an asparagus and mushroom frittata. It was served with a homemade spicy hot sauce, the recipe for which Michelle would only divulge a few key ingredients.

Best of all, the scrumptious food invites conversation among the guests at the table. Sometimes the most interesting people can be sitting right next to you and you would never know it, except for the impossibly light waffles that you just had to talk about.

It is worth mentioning that the staff are long time residents of Frederick and very knowledgable of the area, full of recommendations for things to do and places to eat. Lucky for us, Michelle knows her wine and the local Maryland wineries. When we mentioned we wanted to visit a local winery, she recommended Big Cork Vineyards, which we covered in last weeks post. It was less than 30 minutes drive and a great experience that showed the promising potential of Maryland wines.

We can never just limit ourselves to one or two restaurants a day. It seems like such a waste to miss out on the opportunity of having so many good restaurants in walking distance. There are a lot of options packed into about six square blocks of Frederick’s historic city center. We visited some of our old favorites, which we previously covered in our Historic Frederick Food Crawl. We’ve added a few new spots to our list.

I would be remiss if I didn’t mention that Brian Voltaggio’s well known “flagship?” restaurant VOLT is located in downtown Frederick. You would typically need to reserve well in advance to for a table. However, we have had luck getting a seat at the bar to sample some of their creations. The bar is open Tuesday thru Friday at 3:00 and Saturday/Sunday at 11:30.

Well known Frederick restaurateur Michael Tauraso, of The Tasting Room on Market St, opened the first of his Black Hog restaurants in 2007. He later opened two more locations in Market Square and Urbana. Black Hog specializes in BBQ and brisket. They make their own BBQ sauces, which are served on the side so that you can taste the smoky flavor of the meat itself.

We had a combo plate with Memphis DRY smoked spare ribs and Carolina chopped smoked pork shoulder that was served with a tangy vinegar sauce. Sides of southern greens and coleslaw rounded out the meal.

Restauranteur Mike Long opened the Blue Side Tavern in a building along Carroll Creek that previously housed the old Bentz Street Raw Bar in June 2015. They call themselves a “bluesy honky tonk” kind of place, with bands playing a variety of music including Americana, Bluegrass, R&B, Southern Rock. You can check out the upcoming music schedule on their website and Facebook page. They have a good selection of craft beers with rotating taps. We like getting there for Happy hour between 4-7 when the draft beers are half price.

The Blue Side Tavern

The food is Southeast-American cuisine created by Chef Colin Suser. We like the Chesapeake flatbread, loaded with blue crab, salty country ham, melted Gruyere cheese and tomato. As always, when in Maryland I try to get crab whenever possible and this flatbread lets me know that I’m home. There was a slight white pepper kind of heat to the flatbread that was perfect with the Flying Fish Farmhouse Summer Ale.

Poutine is one of those dishes that always grabs us from the menu. Thin crispy fries with cheese curd and bacon, all drenched in a brown gravy are too tempting to resist. The hoppiness of Dales Pale Ale was exactly what was needed to cut through the richness.

Frederick has many options for tasting craft beers and visiting the breweries where they are made. Frederick’s tourism website has a list of breweries. The most well known is Maryland’s largest craft brewery, Flying Dog Brewery (we even find their beers in Spain!) located on the outskirts of the city.

When staying downtown, we like to stick with places we can walk to, like Attaboy Beer. Husband and wife team Brian and Carly Ogden opened Attaboy Beer in January of this year. The new brewery on Sagner Avenue along Carroll Creek is less than a year old. In the taproom they offer beer flights to sample some of their constantly changing brews, which are also available by the glass, growler, or crowler (32 oz cans). There’s no kitchen but they have food trucks on Friday, Saturday, Sunday or you can bring your own food. Check Attaboy’s website for hours and current beers on tap, or their social media sites for info on food trucks.

There are currently at least ten wineries in the Frederick area. One of our old favorites is Black Ankle Vineyards, located in Mt. Airy about 30 minutes outside of Frederick’s downtown. They have been making high quality wines since their first harvest in 2006.

We have a new favorite winery, as we recently discovered Big Cork Vineyards, which just opened their tasting room in January 2015. Read about our visit at “Big Cork Equals Big Wine for Maryland”

One response to “Getaway to Frederick, Maryland”