Everyone knows that Valencia is famous for its paella, but there are actually multiple styles of rice dishes that are typical of Valencia including dry rices like paella, rices in broth called arroz caldoso, and arroz meloso. We have recently developed a love for meloso, the creamy rice that sits on the line between the dry rice of paella and a soupy caldoso. Maybe it’s the change to colder weather, but meloso delivers more warmth and satisfaction at this time of year. 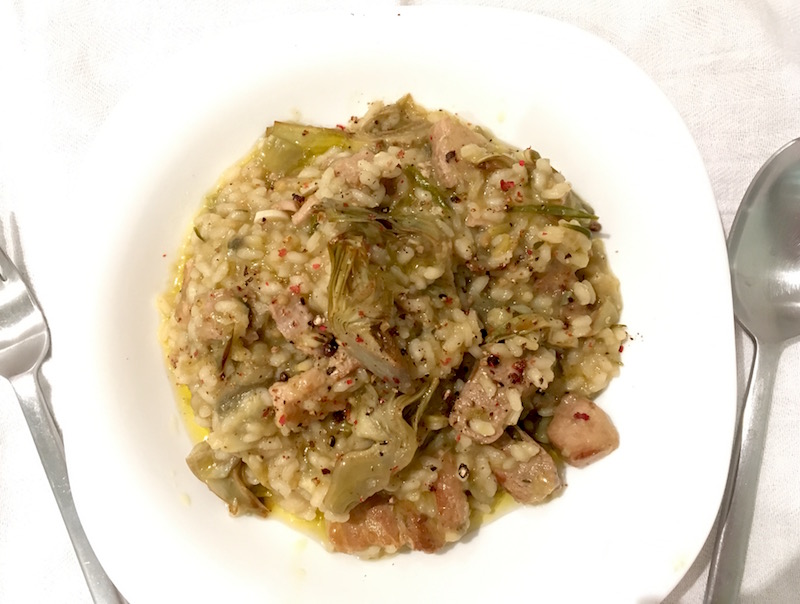 There are no rules (that I know of) regarding the ingredients, as long as you get the rice right. The word “meloso” translates to “mellow” or “honeyed” in English, which describes the syrupy nature of the sauce that forms from the starch of the rice – not from the addition of cream or flour. The key is to have the proper ratio of broth to rice: three servings of broth per each one serving of rice. The type of rice used is also very important. A short grain variety with a high starch content like Spanish bomba or Italian arborio is best.

It’s artichoke season and we just can’t seem to get enough. There are piles of them in the mercados and the supermarkets tempting us to take a bunch home. Their bright green flavor profile works well with pork, so we put together a meloso incorporating these two current favorites.

We needed a broth that would complement these flavors and thought back to salsa verde recipes that we have made in the past. We thought that the tartness of tomatillos would be perfect with artichokes. Tomatillos are not easily found in Valencia but green tomatoes from the mercado made a suitable substitution. We roasted the tomatoes whole, along with one onion cut into quarters, under the broiler until they were charred. These were then puréed in a food processor.

We also wanted to include the unique flavor and heat of a single roasted jalapeno pepper, but again, had no luck finding one. We purchased several different kinds of green chili peppers at the mercado and roasted them, but none had the exact taste we were looking for and not a single pepper had any heat to it (the Spanish palate is not very tolerant of hot or spicy food). If you can get a fresh jalapeno, toss it onto the roasting tray. I think it would take this recipe up a notch.

For the meat, we used a pork tenderloin cut into 1-inch cubes. The pork was browned in a large Dutch oven with a little bit of olive oil until it was seared on all sides. (OK – browning all sides is a real challenge so we just brown as best we can. To do all sides of each piece of meat would take a long time and the splattering oil would render my arm hairless). Brown the meat in small batches so that it sears properly instead of steaming in its released juices. Transfer the browned pork to drain on paper towels.

Slices of garlic were then sautéed in the pan juices for about 30 seconds before deglazing the pan with a dry white wine. Do not over cook the garlic, there is no need to brown it. The pork was returned to the pan, along with a few sprigs of fresh rosemary, fresh thyme, dried sage, the puréed vegetables, and a 1-liter box of broth. We used a broth of caldo puchero, which is made from a combination of meats and vegetables. The pork was slow-cooked over low heat for about two hours, until it was falling apart tender.

While the pork was cooking, we prepared the artichokes. We wanted some of the artichokes to be super soft so that they fell apart into the rice, permeating the dish with flavor. To achieve this, we steamed four artichokes in a shallow pot with an inch of water. After they cooled enough to handle, the tough outer leaves were removed and the hearts were roughly chopped. These were added to the simmering pork toward the end of the cooking time.

We also wanted to add some crunchy texture to this creamy dish by topping it with crispy roasted artichokes. I like nom nom paleo’s visual description of how to prepare fresh baby artichokes for roasting. We roasted them in the oven at 400 degrees until they were crisp.

Perhaps we went to unnecessary lengths to prepare the artichokes in this recipe, partly because we were having so much fun playing with different ways to work with fresh artichokes. However, if this is not your idea of a good time, you could simplify the whole thing by using frozen artichoke hearts and I’m sure it would be delicious.

And now for that rice! As I mentioned above, getting the ratio of liquid to rice correct is important to achieving that creamy texture. During cooking, the volume of liquid in the pan has certainly changed. When the pork was finished, we removed it and the other solids with a slotted spoon into a separate smaller pot to keep warm over low heat. We then measured the amount of liquid remaining in the pot with a large glass measuring cup. For every 3 cups of liquid, you will need 1 cup of rice.

Once we had our measurement, the liquid went back into the pot and was heated to a boil. The proper amount of rice was added (in our case: 2 1/4 cups of rice into 6 3/4 cups of liquid) and reduced to a simmer. It only takes about 15 to 20 minutes total for the rice to cook, so we started checking the consistency after 10 minutes. We stirred the pork and artichokes into the rice for the last 5 minutes of cooking time. When the meloso has reached the right consistency – rice grains with a firm al dente bite in a creamy sauce – remove from the heat. The sauce will continue to firm up after the pan is removed from the heat, so serve immediately garnished with the roasted artichokes.

Don’t forget the wine. This dish can pair with either a rich white wine or a lighter red. We tried both. For the white, we had a Rueda made from the Verdejo grape, however this particular producer lets the wine age on the lees giving it more depth and character. The red wine was a Garnacha with age. Often young Garnachas are too fruity, so we went with a Reserva aged for at least 3 years. Both wines went well with the Meloso.

Artichokes
When working with artichokes, keep a lemon nearby to immediately rub any cut ends to prevent discoloration, or prepare a bowl of cold water with the juice of a lemon and toss the artichokes in immediately after cutting.

For steamed artichokes, cut off stem at base of artichoke and cut off the top one inch.

For roasted artichokes, trim the fresh artichokes down to the edible inner leaves.

3 responses to “Meloso with Pork and Artichokes”