Spanish Conservas. Yes, you can get great seafood in a can

Our interest was piqued at Jib’s Gastrobar, a little bar in Valencia across from the Jardin del Parterre (Garden of the Parterre). We ordered the Mejillones (mussels) under the list of Conservas on the menu, and were surprised when they arrived to the table in a can. The plump mussels inside were basking in a tomato-based sauce, allowing them to pair well with the red wine that we were drinking. We initially felt that 9 euros was a bit steep for a can of mussels and decided to look into this “conserva” thing. A little research revealed that they are not your average canned food.

Conserva means preserve in Spanish and is an important part of Spanish tradition. The best quality seafood and seasonal vegetables are processed at the height of freshness. Much of the seafood conservas come from the cold waters of the Cantabrian Sea along the northern coast of Galicia, Spain (northwest Spain on the Atlantic coast). Conservas are also big in Portugal, which is not surprising since Portugal borders Galicia and they share the coast.

Producers of these conservas take great pride in the quality of ingredients, including the oils and seasonings that blend with the food over time in the can. These are not just an alternative to fresh seafood, but something wholly different. The canning process is purposefully done to transform the food inside into something special.

Conservas from Spain are considered to be luxury foods that are typically served as tapas along with some salty potato chips and a glass of wine or vermouth. There are restaurants that specialize in conservas, either serving them straight from the can or using them as ingredients in tapas.

A visit to the local supermarket (Mercadona or El Corte Ingles in Valencia) revealed aisles full of different kinds of seafood and vegetable conservas. The brightly colored boxes promised amazing things inside, many with names unfamiliar to us. I just had to know what was inside some of those tins, but we had no idea what we were looking for. We turned to Spanish friends for help.

Enter Miki S’agaro, our good friend from Catalonia. Miki recommended Espinaler as a reputable conserva brand. One of the leading producers of canned seafoods in Catalonia, Espinaler hand packs tins of fresh fish from the coast of Spain. We were able to find Espinaler products at a tiny food stall in the Mercat Central of Valencia called “Central De Latas.” This vendor sells a beautiful selection of conservas – however, catching him open can be tricky. We grabbed up a couple of the most interesting boxes from Espinaler.

It was time for a conserve tasting! We hopped on the train to Costa Brava on the northeastern coast of Spain, where Miki and his wife live by the Mediterranean Sea. Once we arrived, we discovered that Espinaler is available in stores all over their small town. It turns out that Espinaler is headquartered in Barcelona just an hour south of Miki’s place. We rounded out our tasting with several more tins of Espinaler, a jar of octopus from Mera, and white asparagus from El NAVARRICO. Some olives, bread, potato chips and cold Albarino wine, and we were set for an extravagant feast with the blue water of the Mediterranean in the background. 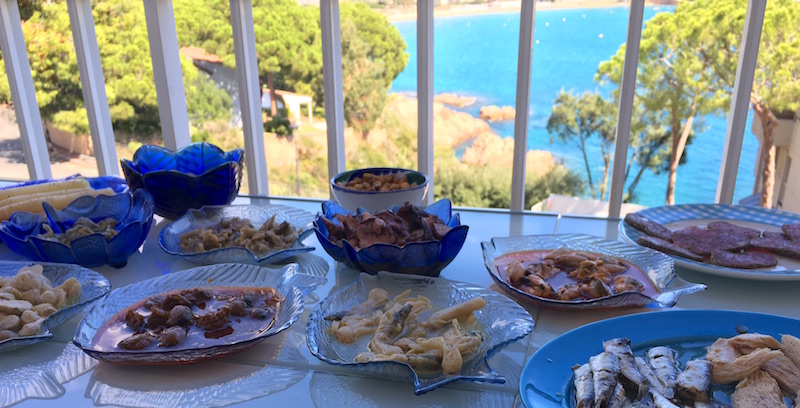 So this is what we found in those little tins:

Mejillones (mussels) came from mussel farms in Arosa, a saline estuary in Galicia, Spain were they are grown in floating rafts. Espinalar fries the mussels in olive oil and packages them in a tangy escabeche sauce of vinegar and spices. While the flavors worked nicely together, we found the mussels to be softer and a bit smaller than those we had at Jibs. We prefer them larger than the 10/12 piezas size we had purchased, so the next time I would look for the larger 7/9 size. We have learned to pay attention to the “piezas” listed on the package, which indicates the number of pieces per can.

Navajas (razor clams) de las Rias Gallegas were packaged Au Natural, leaving them with a nice fresh flavor of clam and firm but velvety texture. A little squeeze of lemon and some fresh pepper was all that was needed.

Pulpo (octopus) was from Mera, a family-run company in Girona Spain. The Tentacles a la Gallega were firm but tender and preserved in a very flavorful sauce. 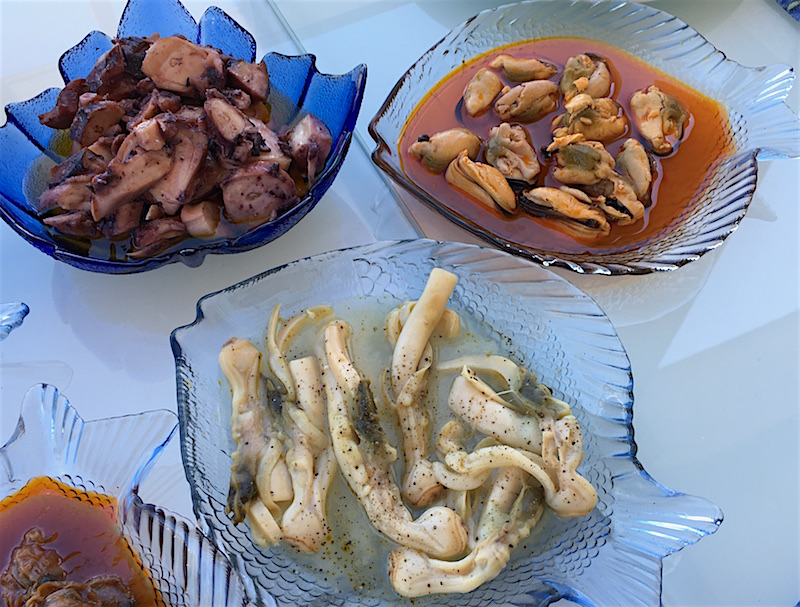 Zamburinas (Scallops) en salsa Gallega. These little scallops from Galicia were truly special. Preserved in a mild tomato sauce, the scallops were tender and buttery. Their not as pretty as the picture on the box, but I know more than one of us did a little yummy dance on the first bite! 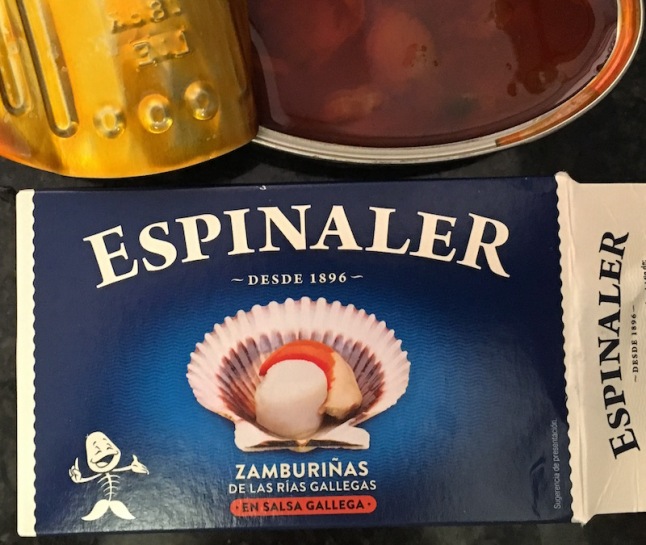 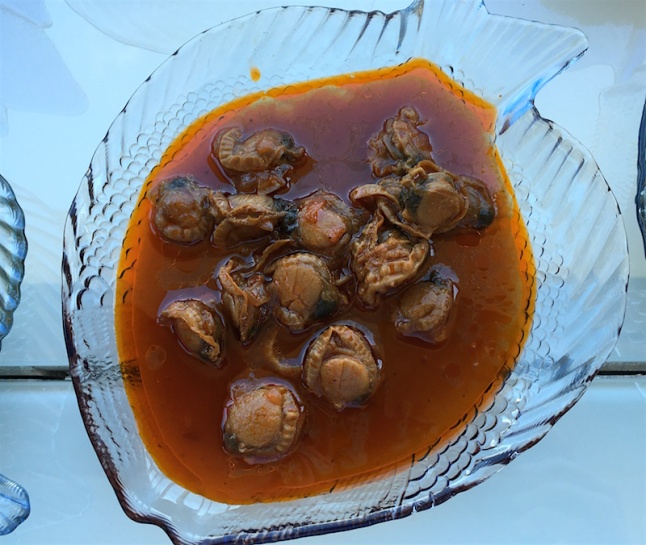 Ventresca De Bonito Del Norte (bonito tuna belly) is the best part of the Bonito Del Norte tuna that migrate north into the Bay of Biscayne of northern Spain. The meat was permeated with olive oil, making it smooth and luxurious with a very mild flavor. Certainly the best canned tuna that I have ever experienced (although admittedly the bar is set pretty low in the U.S.)

Sardinas (sardines) These were the sardinillas, meaning they were baby sardines. I can’t imagine the effort required to clean these little guys. The tiny bones had completely dissolved away, leaving them with a softer texture than larger sardines. 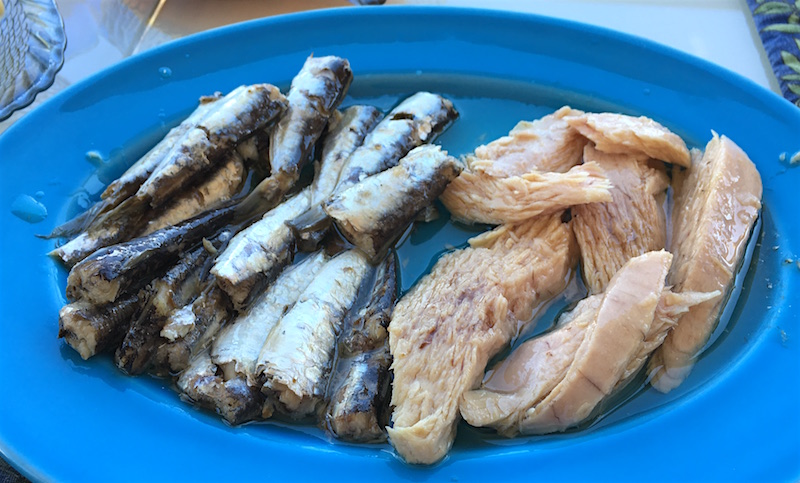 Caracoles De Mar (sea snails) were plucked by hand from the rocks of the Mediterranean. These snails are steamed in their shells and then removed and canned al natural in water. They were surprisingly delicate despite their gruesome appearance. The meat was tender, yet firm. I believe these were the favorites of the afternoon. 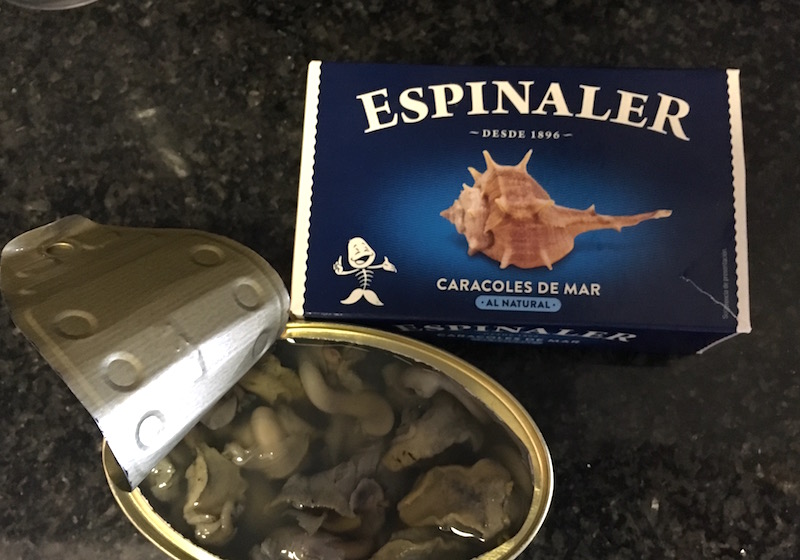 Almejas (clams) were little clams that come from the coast of Brittany in north west France. Packaged in water, they had a fresh flavor that was a little more intensely clammy than the razor clams. Again, we dressed them with a bit of lemon and pepper.

Esparragos Blancos (white asparagus) come from Navarra, an area in northern Spain that borders France. In the opinion of our “experts” they were of very high quality and some of the best they have ever had. I just know they were really delicious. The stalks were silky, melting away in the mouth with no tough fibers. We gave them a drizzle of olive oil and lemon to complement the rich asparagus flavor. El NAVARRICO, is a family run artesan producer of canned fruits and vegetables from the Navarra orchards. We’ll be on the lookout for more of their products. 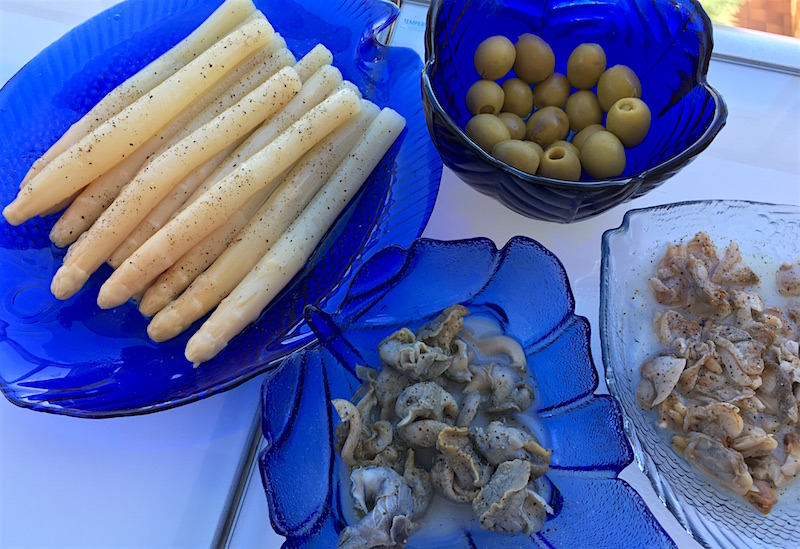 Huevas de Merluza (Hake roe) en aceite de oliva. Yep, fish eggs in olive oil. The eggs are cooked, cut into slices and packed in olive oil. These were surprising to me because I expected them to be soft and creamy. Instead, the individual eggs were well preserved giving the roe a grainy texture. 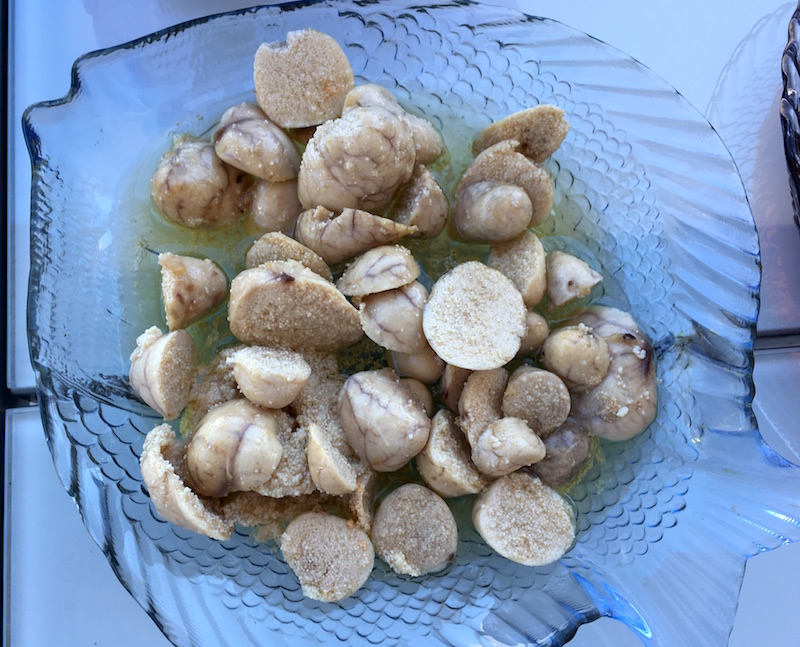 If you want to try these fantastic conservas in the U.S., the online retailer of Spanish foods La Tienda has several brands to choose from. We initially didn’t think that Espinaler was available, but fortunately in April of this year Ondarrea Foods in New York became the only importer of Espinaler in the states. While browsing through their website, we stumbled upon this Anthony Bourdain video from a No Reservations episode filmed at the Espinaler Bodega in Catalonia. We recalled seeing this years ago when it was released in 2008. It seems that conservas were already there in the back of our brains somewhere, we just needed a little nudge to remember.

Relaxing on the terrace after this fabulous meal of conservas, I couldn’t imagine a more beautiful location or better company for our tasting. Thank you, Miki and Mariangels S’Agaro! 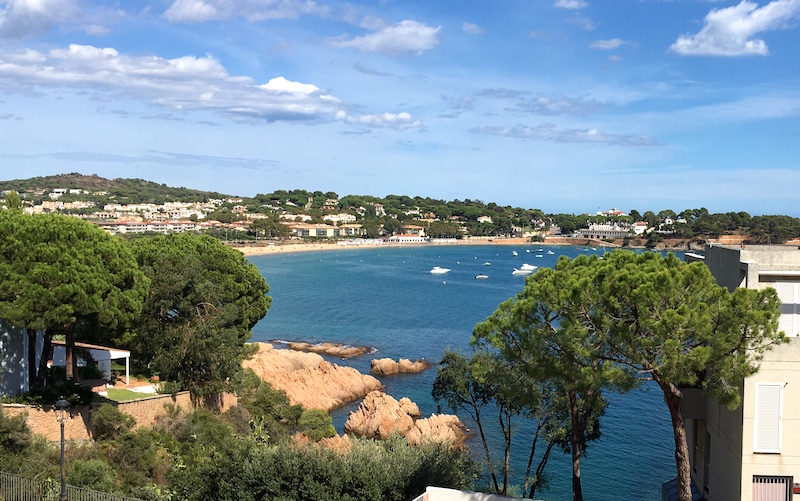