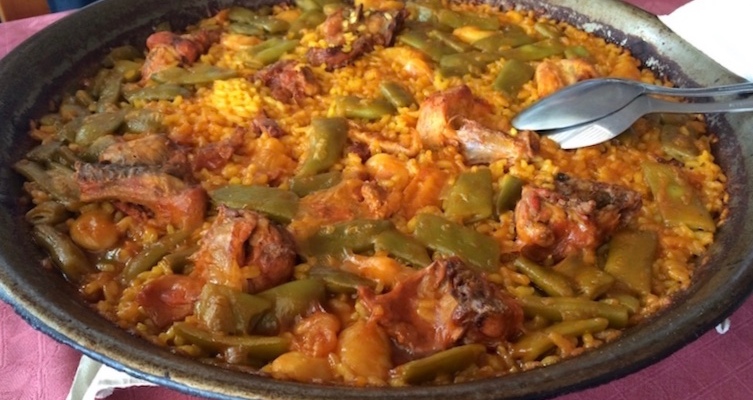 The Best Paella in Valencia?

When in Valencia, you must eat paella. If you are able to eat that paella at a restaurant on the beach, it would be even better. The national dish of Spain, paella originated in the Valencia region and it is everywhere here. Pictures of yellow rice loaded with meat or seafood grace windows and menu boards all over the city. It shouldn’t be hard to find good paella. 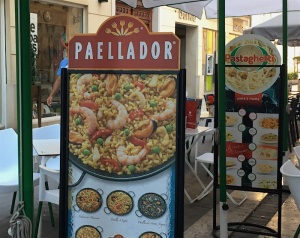 However, the pressure to find the best, most authentic paella is immense. An influx of tourism has led to the mass production of pre-made counterfeit paella pretending to be the real thing. Information on the internet had me convinced that paella scams lurk all over the city. Evidence for this was seen on signs in many of the tourist locations advertising Paellador, a commercially available brand of pre-made paella mix. They just add water and stick it in the oven. If you don’t know any better, that sign looks delicious.

Finding the real thing would take some research. First, we needed a little understanding of the history of paella to help us to know what to look for. Rice and saffron, the two key ingredients, were both brought to the Valencia region of Spain during the Arabic occupation of Andalusia in the 10th century. Farmers began cooking rice in large shallow pans called paellas over open fires in the fields by the mid-19th century. They added ingredients that were readily available like chicken, rabbit, beans and sometimes snails. A seafood version of the dish later became popular on the coast as paella de marisco.

The key to good paella is to cook the rice al dente, getting as much flavor as possible into the grains without them becoming mushy. Bomba is a variety of rice cultivated in Spain that is commonly used for paella because it absorbs a lot of liquid without breaking apart. Authentic paella should be cooked over a wood fire, imparting a smokiness to the dish.

Other important things to know: Paella is only eaten at lunch, never for dinner. It is never cooked in individual portions, so there should be a minimum order of 2 persons. It should take a long time; if your paella comes out quickly, be suspicious. Meat and seafood should never be mixed together. Whew!

With so many rules, how are we supposed to find this elusive authentic paella? There is no shortage of opinions on the internet and everyone that we talked to had their own idea of where to get best paella, so we turned to local friends for help. 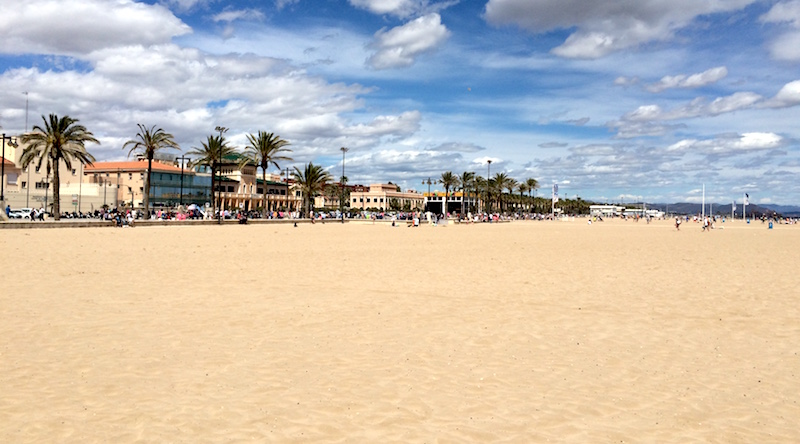 We have friends that have lived in Valencia for over a decade. Their restaurant of choice for paella is Casa Isabel, a casual restaurant that began in 1969 as a picnic area located on Playa de Malvarrosa. This was our first visit to Malvarrosa beach, the main beach in Valencia city. We were amazed at the vast stretch of soft sand and the number of people enjoying the calm water off-season. They had made a reservation in advance, as Sunday afternoon is a popular time for Spanish families to have paella and the restaurant was very crowded at 1:30 pm.

We ordered the Paella Valenciana, the original paella of Valencia. Since good paella takes about 30 minutes to cook, we distracted ourselves with some tender fried calamari and a few glasses of white wine, while listening to a musician on the beach next to the restaurant. 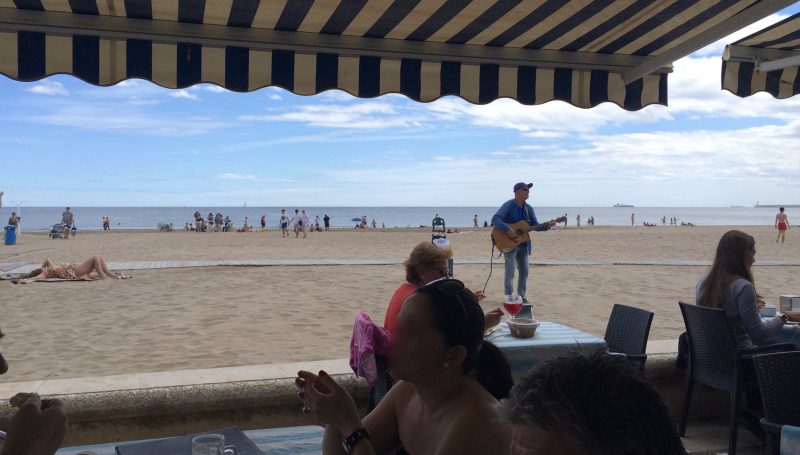 Casa Isabel on the beach

When the moment finally arrived, the fragrant paella was placed in the center of the table. This was a good sign, as paella is meant to be a communal dish that the family gathers around, everyone serving themselves from the same pan. We helped ourselves to spoonfuls of chicken, rabbit, white beans and broad green beans. I was also hoping for snails, but I guess you can’t have everything. We greedily scraped up the the socarrat, the prized brown layer of caramelized rice that forms on the bottom of the pan where all of the flavors and juices have concentrated. We could have used a few more chunks of rabbit, but the rice was quite good.

For our next paella outing, we headed to the Marina Real Juan Carlos I and the America’s Cup Port, which was revamped for the 32nd America’s Cup Races. The Playa de Las Arenas on the south end of the beach near the marina is lined with classic arrocerias (restaurants specializing in rice dishes) that are frequented by tourists. In business for over one hundred years, these are supposed to be some of the best paella restaurants. 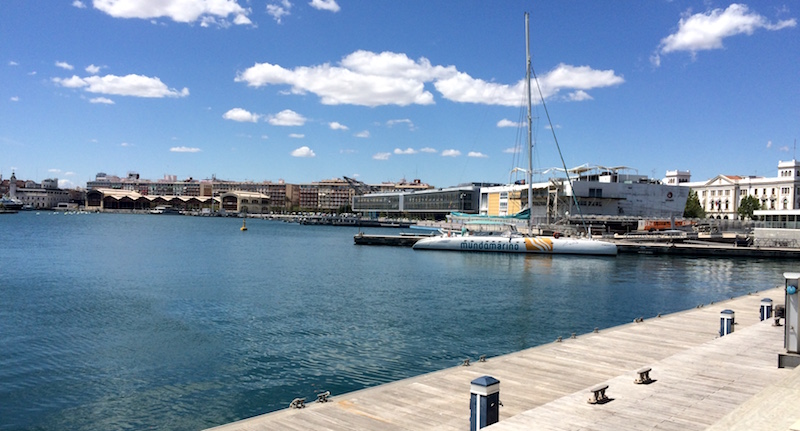 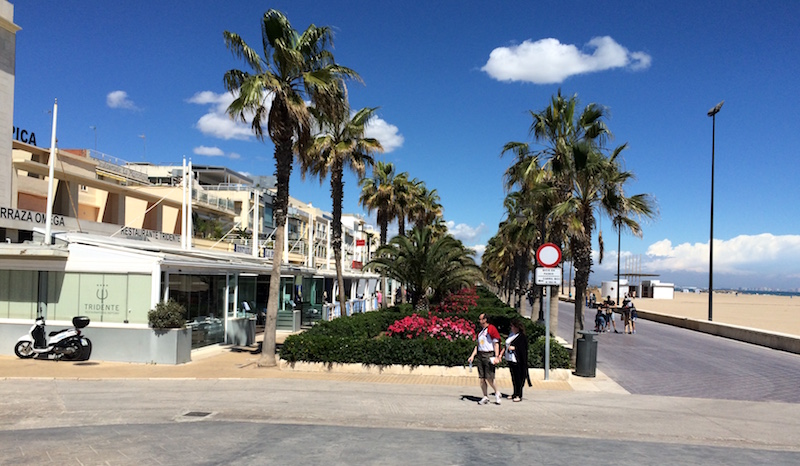 We walked up and down the stretch of restaurants to make our choice. L’ estimat is widely recommended on travel sites, but it seemed more formal than we were looking for. The famous La Pepica is also on this stretch, but we settled on La Marcelina, where the atmosphere was elegant but comfortable. La Marcelina was also a recommendation from our taxi driver, so how could we go wrong?

La Marcelina offered a menu of the day for €22 that included a salad, mixed fried fish, bread, and a choice of selected paellas. This was a pretty good deal, but the Paella de Marisco (seafood paella) that we wanted was not included, so we ordered from the regular menu.

We started with appetizers of smoked sardines with strawberry ceviche, an interesting flavor combination of salt, smoke, and sweet-tart berry which was a real taste bud stimulator.

When our paella was ready, the waiter presented it to our table like a work of art, and then whisked it away to a serving area. A few minutes later we were each given a smallish plate of paella with one langostino, one prawn, and bits of calamari scattered throughout the rice. The rice was nice and chewy, with the flavors of the seafood permeating the grains. Again, we would have liked more seafood, but with paella its really about the rice.

But where was our socarrat? Scraping up those yummy brown bits was a big part of the paella experience and it was missing here. On the other hand, we couldn’t have asked for a more lovely spot looking out on the beach and the azure blue Mediterranean sea; and the vino blanca was very good. 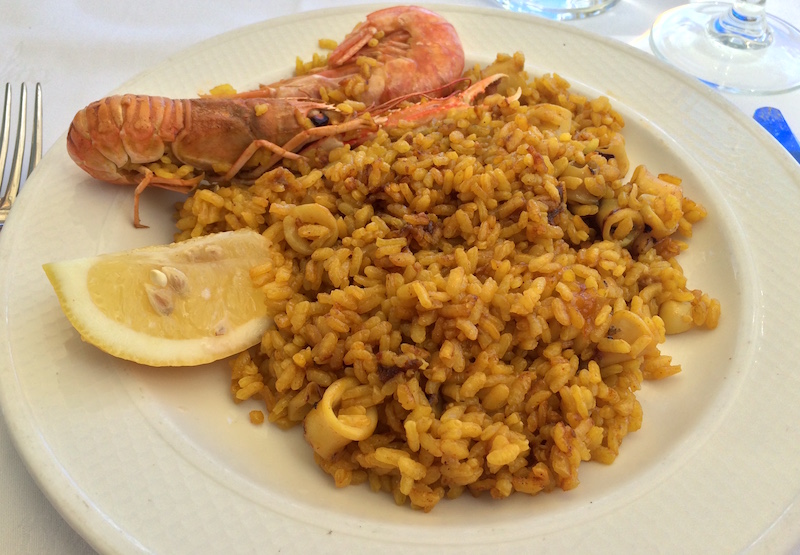 Did we find the best paella in Valencia? Probably not. We did have two fantastic meals on the beach, but didn’t experience that paella revelation we were looking for. We’ve had great paella at restaurants in the U.S. and, so far, our favorite paella ever was prepared by a Spanish friend in the mountains of Utah. It’s hard to compete with the cooking of a Spanish mother.

Still, I’m fascinated by the passion that Spaniards have for their national dish and want to understand of the allure of paella. I’m willing to keep up the research. In the meantime, I say that if you find a nice spot on the beach, sit down and enjoy it. If the paella looks and tastes good to you, eat it without guilt.

Since publishing this post, we’ve had some fantastic paella experiences that I have not gotten around to fully writing about yet. Here is a preview:

Raco del Turia for a classic paella in a traditional restaurant setting. The dining room is elegant and intimate, almost like you’ve been invited to a Spanish family’s home for paella. The Paella del Senyoret had plenty of prawns, sepia (cuttlefish) and chunks of rape (monkfish). The rice was flavorful and firm.

Marina Beach Club for a more modern experience in one of the prettiest settings on the beach. You can order paella in the stylish restaurant or you can sit right down next to the sand in the Chiringuito Beach Club. The Paella de pato, setas y alcachofas (duck, mushrooms, and artichokes) was deeply flavored and filled with duck. The rice was spot on with good bite to the grains. Together with this view of the beach, Marina Beach Club is our new favorite for paella.

Marina Beach Club
Marina Real Juan Carlos I
Paseo de Neptuno
Phone: (+34) 961 150 007
Hours: Daily 11am – 4am, but kitchen hours vary depending on which area of the Beach Club you are eating in.

It’s Thursday! That means Bakehouse is open and we get to have fresh croissants for breakfast! Few things make my husband happier than a perfectly buttery flaky croissant 🥐 and these are pretty close to perfect. So glad to have this wonderful new bakery in town. @bakehousemd #croissants #frederickmd #downtownfrederickmd
Almost missed it! Octopus goes fast around here 🐙 We’re always in search of tasty octopus dishes in Frederick restaurants. This version @trrestaurant with a slightly spicy romesco sauce and pickled raisins is a new favorite. #frederickmd #frederickfoodie #frederickeats #foodblog #octopus
Follow Julia Eats on WordPress.com