You’ll probably see me say again and again that one of our favorite things about San Miguel de Allende Mexico is the diversity of restaurants. Whatever kind of cuisine we’re in the mood for, we will likely be able to find it. Napoletana style pizza has been no exception. Pizzeria Fiamma opened just a few weeks before our arrival in San Miguel in January.

It’s a good thing that Fiamma was recommended to us by friends, or we may never have found it. Just to the left of Don Lupe Grill at Salida a Celaya 6, the sign above a passageway simply says “Pizzeria”. At the end of that passage, you step out into a courtyard with a central fountain and cascading flowers. You have arrived at Fiamma.

Owner and Chef Marco Bruzzone is originally from Abruzzo Italy. He has also spent many years in the United States, including working in fancy restaurants in Chicago. Now in San Miguel, he says he wants to get back to basics with simple Italian food. We feel he has created the perfect environment for it. Sitting at one of the cafe tables next to an olive tree, sipping a glass of wine with the fountain trickling nearby, and you could easily be in Italy.

The wood-fired pizza oven was constructed by Marco himself with bricks imported from Italy. The ingredients for the pizza are imported from Italy, including the flour and canned tomatoes. The fresh cheeses, however, come from local cheesemaker Remo.

Excuse me for a moment while I go off on a tangent about cheesemaking in San Miguel de Allende. I was quite surprised to find that we have an Italian cheesemaker just outside of town raising buffalos and making cheese according to traditional Italian processes. Remo is an Italian cheesemaker who came to Mexico in the 1970’s as part of a project between the Italian and Mexican governments to promote and teach cheesemaking. He decided to stay in San Miguel de Allende and opened Productos Remo in 1983. Over the years it has expanded into a modern cheese facility with their own ranch of cattle and buffalo. Their list of traditional Italian cheeses includes provolone, taleggio, gorgonzola, mozzarella, and burrata. Remo’s has a retail store just outside of town on the road to Queretero. A visit to Remo’s Fabrica De Quesos is at the very top of our “To Do” list when we return to San Miguel!

Now back to Fiamma, where Remo’s burrata is the centerpiece of the arugula and burrata salad. The burrata is delivered daily from Remo because it is so perishable. The fresh cheese with its soft, creamy center is served over a salad of crisp arugula, cherry tomatoes and red onion.

The menu at Fiamma includes a variety of salads, cheese and meat plates, nine pizzas, plus a calzone. Also look to the chalk board for Marco’s special of the day, which could be lasagna, a special calzone, or maybe porchetta.

The Porchetta special of the day: sliced roasted pork with pineapple and berries

The pizzas are Neapolitan style, so they are light and fresh. The crust is thin on the bottom, puffed and airy around the edges, blackened by the fire of the oven. The tomato sauce is light and full of the flavor of ripe tomatoes. The pizzas are individual size, though we find can split one along with an appetizer.

Our personal favorite is the Salsiccia e funghi, loaded with Italian sausage, mushrooms, and fresh mozzarella. 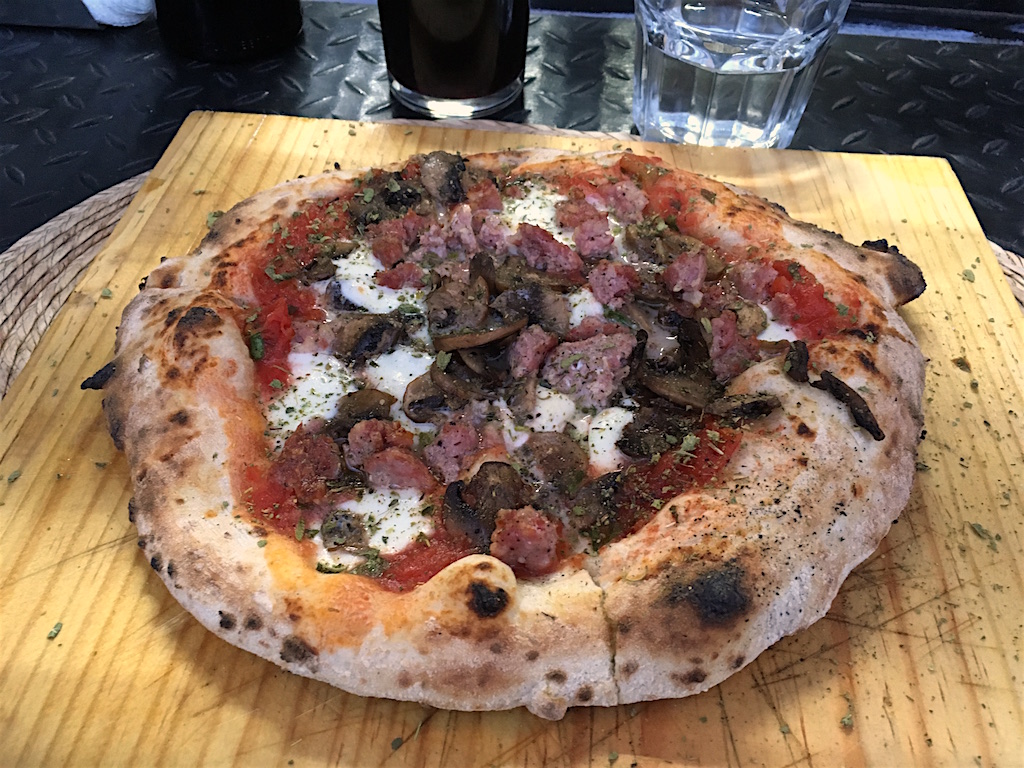 We also like the 4 Stagioni, which has four quadrants of toppings: prosciutto, green and black olives, artichoke, and gorgonzola cheese. 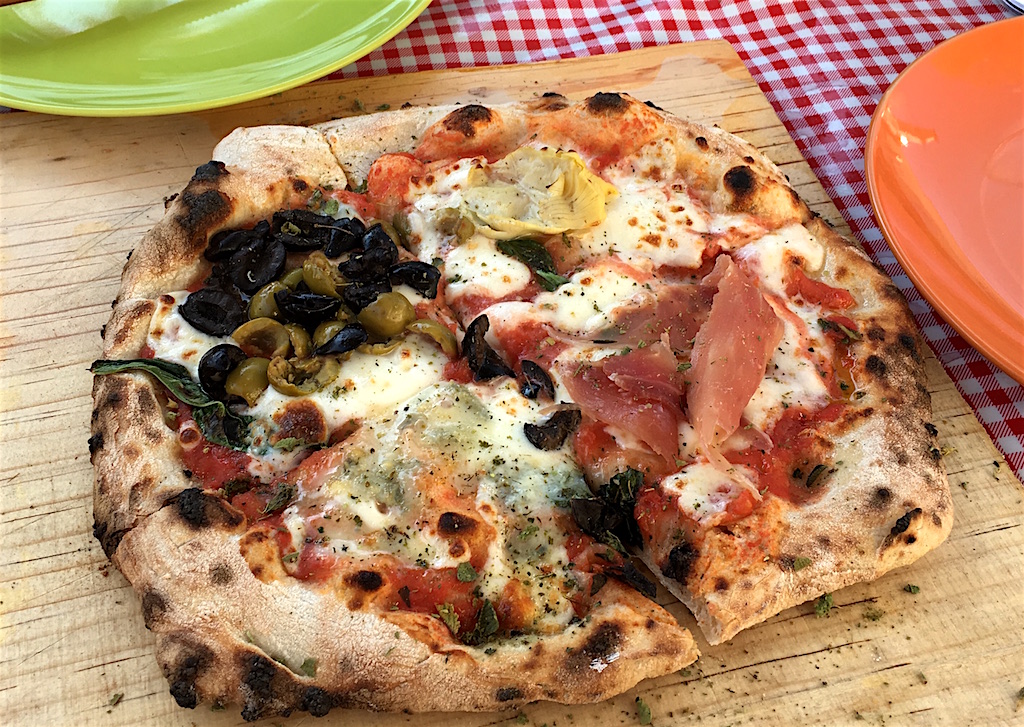 Good pizza needs a good table wine. There is just one red and one white wine available, but that’s all we need. The Montepulciano D’Abruzzo that Marco has selected is a perfect pizza wine. The wine is served in small glass tumblers, the way that we drink wine at home. Another example of the comfortable, uncomplicated nature of Fiamma.

When you are spending time in an unfamiliar country, it’s nice to find a place that is comfortable and uncomplicated. Marco has treated us like friends from the first time that we walked into his restaurant to peak at the pizza oven. We watch him go from table to table, talking with his customers, and see that he engages everyone with the same hospitality.

And that brings me to another one of our favorite things about San Miguel de Allende…the people.