A Glimpse of Porto, Portugal

This autumn we spent nearly a month in Porto, the second largest city in Portugal. Porto sits on the north bank of the Douro River, where the river empties out into the Atlantic Ocean. Portugal is historically a seafaring culture, so much of their food comes from the sea. We were excited about filling up on fresh Portuguese fish and seafood. We were also looking forward to visiting the famous Port cellars of Vila Nova de Gaia, a separate city that sits directly opposite Porto on the south bank of the river.

These “glimpses” are meant to give an overview of a city, like a pictorial walk around to set the stage before diving into the details of gastronomy in later posts. At first impression, Porto was not what we expected. It was chaotic and messy, yet colorful and picturesque. It is one of the oldest cities in Europe and its historical center is a UNESCO World Heritage Site. While Porto is full of charm and character, with breathtaking views and quaint cobblestone streets, much of the city is rundown and grungy. Stunning architecture is contrasted by vacant buildings, some with the roofs crumbling down inside of them.

But I need to cut Porto a break and remember that Portugal suffered greatly from the 2008 financial crisis, so the crowded streets and ubiquitous construction cranes are a good sign. The economy is improving, tourism is booming, and a lot of rebuilding is underway. Porto was elected The Best European Destination by the Best European Destinations Agency in 2014 and 2017 and travelers have heeded the call.

In time, we found our own groove. We learned how to avoid the crowds of tourists and discovered where to go to savor the many things Porto had to offer. We found great restaurants, wine bars, lovely green parks, and quaint fisherman’s villages. The city grew on us and we came to really enjoy our time there.

We decided the best way for us to take in a view of the city was from a boat on the water, and so that is where we will begin this glimpse—from the deck of a 34-foot sail boat on the Douro River.

There are numerous tour companies offering boat cruises on the Douro, some going all the way up the river into the wine country of the Douro valley. We opted for a more personal experience with a private two-hour sailing cruise through SAILING 360º.  We sailed to the edge of the Dom Luís I Bridge, where we turned around because our mast was too tall to fit under, and then out into the Atlantic Ocean. I should note that this was not a guided tour with descriptions of sights along the way—the crew was busy sailing. It was perfect for us because we love sailing and just being on the water. They provided us with a bottle of sparkling wine to enjoy while the city slid by.

Tour from the water 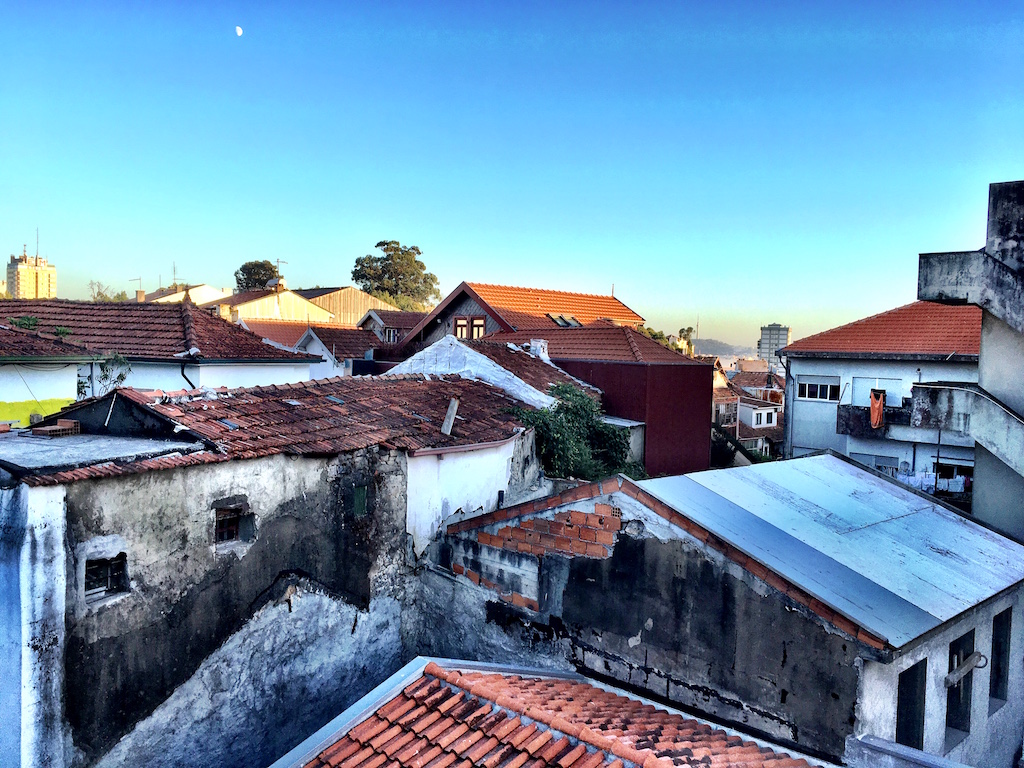 I’ll leave you with the view that we woke up to each morning, watching the sun rise over the rooftops while we sipped our coffee. Despite the dilapidation, I found it beautiful and calming. Coming up, we’ll be sharing our visit to one of the Port Lodges, our favorite restaurant finds, and days spent exploring the fishing villages looking for fresh fish.

7 responses to “A Glimpse of Porto, Portugal”