When in Spain, we like to drink Spanish beer. To keep things even more local, we like to drink Valencian beer in Valencia. Nowadays, we can find any number of locally brewed craft beers such as Tyris, La Socarrada, or Antiga Artesana. But long before that, Turia Märzen was the local beer. It was named for the Turia river flowing through the city and the Torres de Serrano graces the label.

Turia Märzen is a Bavarian style beer made with toasted malt that gives it an amber color and toasty flavor. It is served on tap and in bottles throughout Valencia. After participating in a Tapas Con Turia event earlier this summer (more about that below) we decided to dig into the history of Turia Märzen Cerveza. Hence this article.

Turia Märzen was first made by a group of friends in 1935, but due to the interruption of the Spanish Civil War, it wasn’t sold until 1947. It was produced by Cervezas El Turia, along with a few other beer styles, in a factory on Calle San Vicente next to the railroad tracks in Valencia.

Over the years, with all of the competition from larger national and international beer labels, Cervezas El Turia nearly disappeared. S. A. Damm, a company based in Barcelona that was an initial investor in the Cervezas El Turia brewery, took over control of the factory and stopped selling the beer in bottles. For many years it was difficult to find Turia Märzen in the city and when it was available it was only on draft.

In 2013, Damm decided to bring back the bottle format and launched a branding campaign to re-introduce it. Turia Märzen is no longer brewed in Valencia – the old factory was abandoned and neglected before being demolished as part of the new Central Park project near the train station. The beer is now brewed in Murcia in the Estrella de Levante factory, south of the Valencian Community. 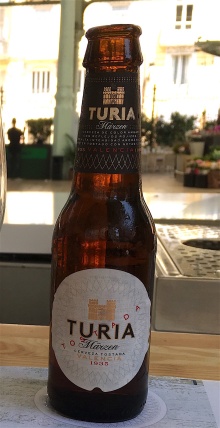 Most bars and restaurants in Spain serve only one brand of beer on draft. Usually that beer is a light lager, which is the preference of most Spaniards. Some of the most common Spanish beers are Estrella, Mahou, Cruzcampo, and San Miguel Especial. They are all pale lagers. Often we find that our only options are Heineken and Amstel. This is because Heineken España has four breweries in Spain, including one in Valencia.

But if Spaniards typically drink lighter beers, then why the toasty Oktoberfest-style in Valencia? If anyone knows the answer, I would love to hear the story. All of my digging didn’t tell me why they brewed this particular beer, but I’m glad they did. It’s nice to have a widely available beer on tap that is actually a good, full flavored beer.

The relaunch of Turia Märzen has been accompanied by a strong marketing campaign. During the two years that we’ve been here, we noticed numerous restaurants getting facelifts with new Turia branded furnishings. Mi Cub in the Mercado Colon, for example, recently revamped their terrace with new tables, chairs, and a bar to house their Turia Märzen taps.

Cerveza Turia sponsors gastronomic events throughout the year. We really appreciated their commitment while taking advantage of their De Tapas con Turia event in June, when 31 restaurants offered a unique gourmet tapa and a small Turia Märzen beer for just €3.

Unlike some other rutas de tapas we’ve tried in Spain, this event was very well organized. The participating restaurants really went above and beyond our expectations in creating delicious tapas. We were very impressed and tried as many as we could get to during the week. Wherever we went, we saw lots of people doing the same. 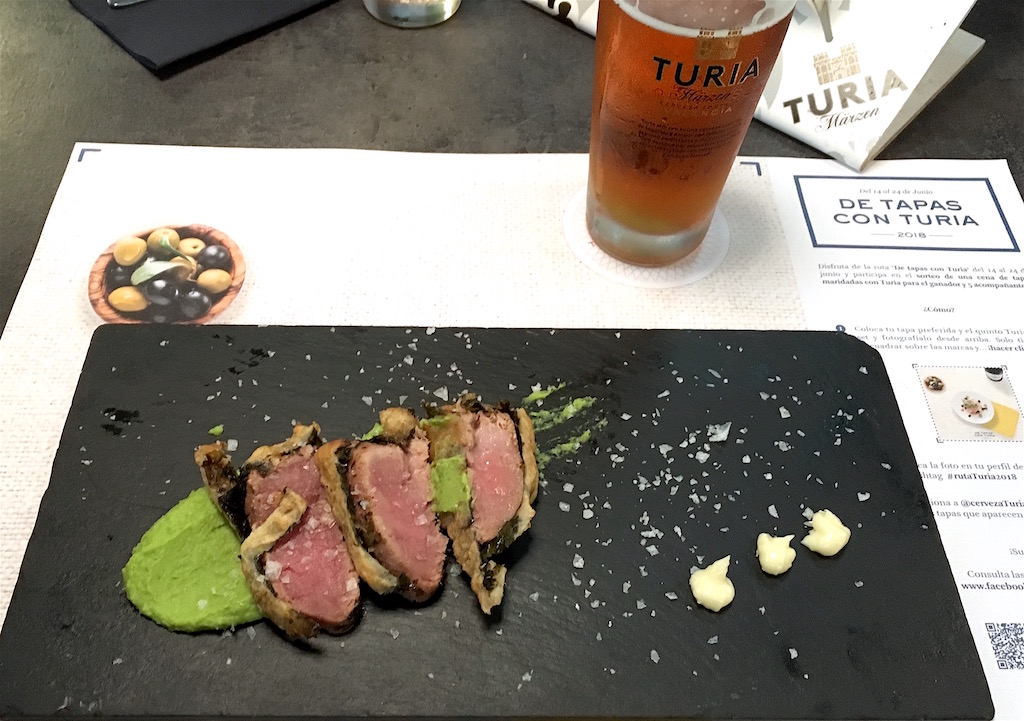 Another event that we were sorry to have missed was the Turia Gastro-Urbana that took place in October 2017. Twenty-six restaurants in Valencia created 3-course menus using local and seasonal Valencian products. Each menu was paired with a Turia Märzen. The Gastro-Urbana is part of Turia’s L’Horta de Valencia program. This project is a collaboration between Cerveza Turia, local farmers, chefs, artists and other groups. The L’Horta de Valencia refers to the fertile agricultural region of Valencia that is irrigated by the Turia river.

Cerveza Turia also sponsors festivals and concerts throughout the year in the Valencian Community. Keep an eye on the  Cerveza Turia Facebook page to find out about upcoming events where you can drink Valencia’s original local beer.

Like Loading…
← Cochinillo: How to Find This Porky Goodness in Valencia or Even in Your Own Kitchen
→ Floating Through a Fairy Tale: A Wine Cruise on the Vltava River in Prague