Village Life in Castilla y León: How We Ate and Drank Like Cavemen

Not like prehistoric cavemen. We were more like “wine-cavemen,” sitting underground feasting on the wine and food of northern Spain. Northwest of Madrid is the region of Castilla y León. It is the largest autonomous community in Spain, formed in the year 1230 when the kingdom of León and the kingdom of Castile were permanently merged together. This is where Castilian Spanish, the official language of Spain, was born in the 11th century. It’s full of castles, cathedrals, and small medieval villages. When we were invited to visit one of these small villages, we knew we were about to make some very special memories.

We took the train from Valencia to Madrid, and then passed through the Sierra de Guadarrama mountain range into the Duero river basin. The land here is a flat plateau covered with vineyards and fields of cereals. The train got us as far as the city of Valladolid, which sits in the middle of  of Castilla y León. A group of friends, including our good friend Miki Sagaro, picked us up at the train station for another hour and half drive northwest through the country. We were all heading to the home of Martin, a friend who’s family has lived in this part of Castilla y Leon for generations. 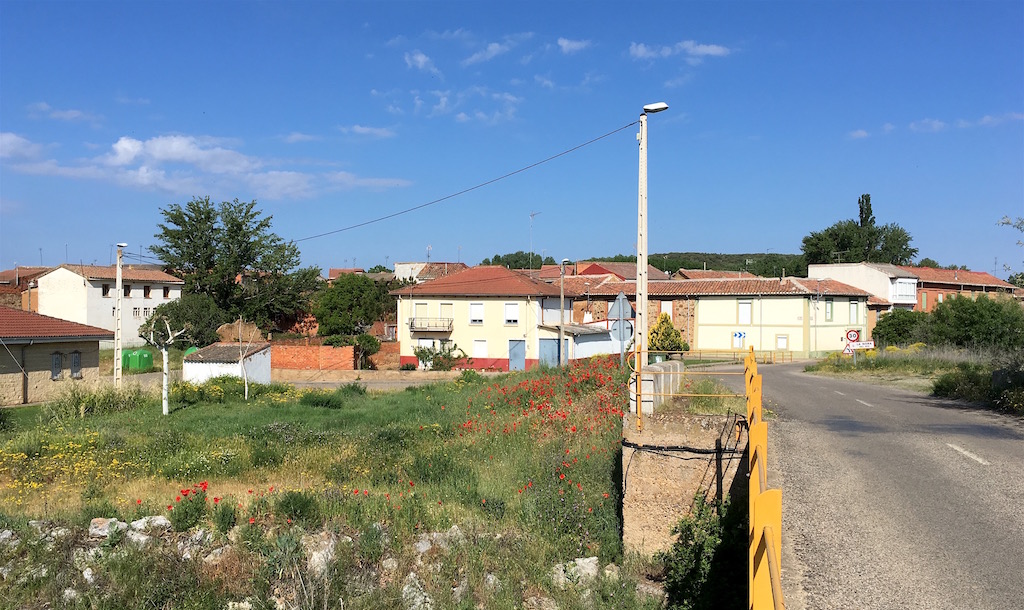 We arrived in a small farming village nestled into a bend of the Órbigo river. There are fewer than 100 inhabitants. There are no boutiques or restaurants. No museums. There is one small, charming old church where a white stork has taken up residence on the bell tower. The only bar is owned by the town, and residents take turns running it. The only thing to do in a town like this is to eat, drink, and enjoy the company of those around you. Not a bad plan. In a town with no restaurants, we ate very well. 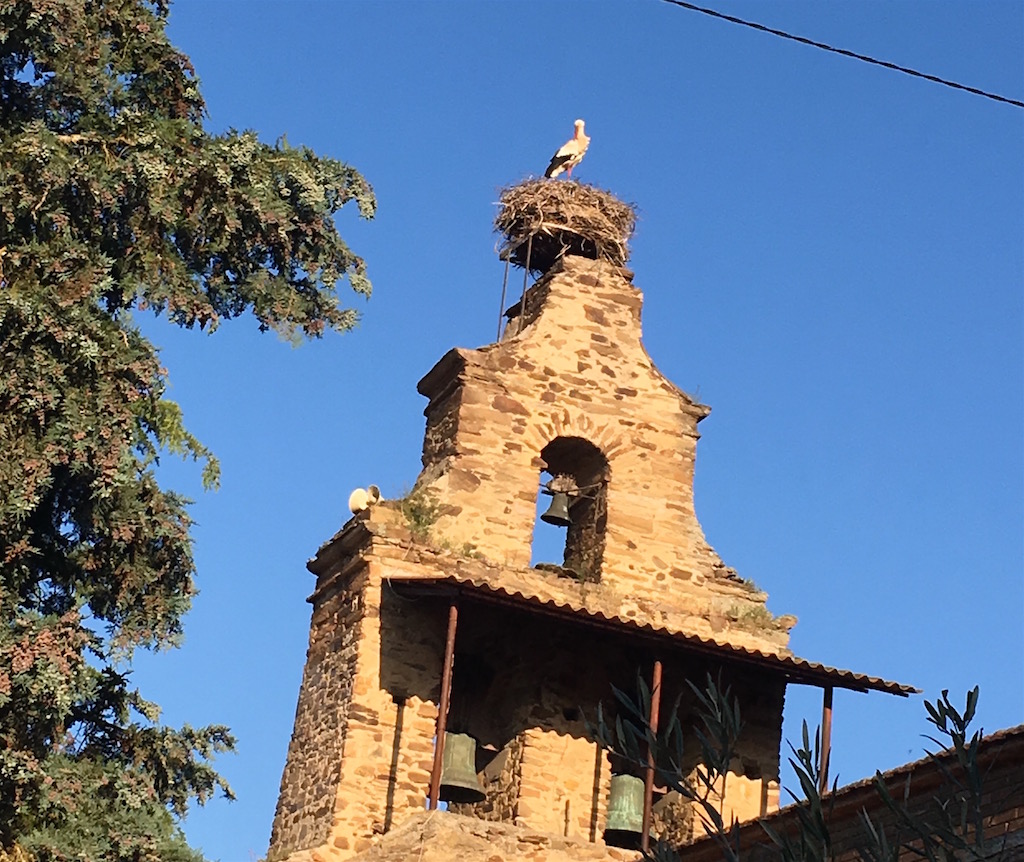 We had barely unpacked before it was time to walk to our hosts’ bodega. About one kilometer outside of town, a dirt road leads past a series of caves dug into the hillside. These bodega caves are typical of this area south of León and north of Zamora. The landscape of the surrounding countryside is dotted with clusters of them, their chimneys sticking out of the top of dirt mounds giving away their presence. 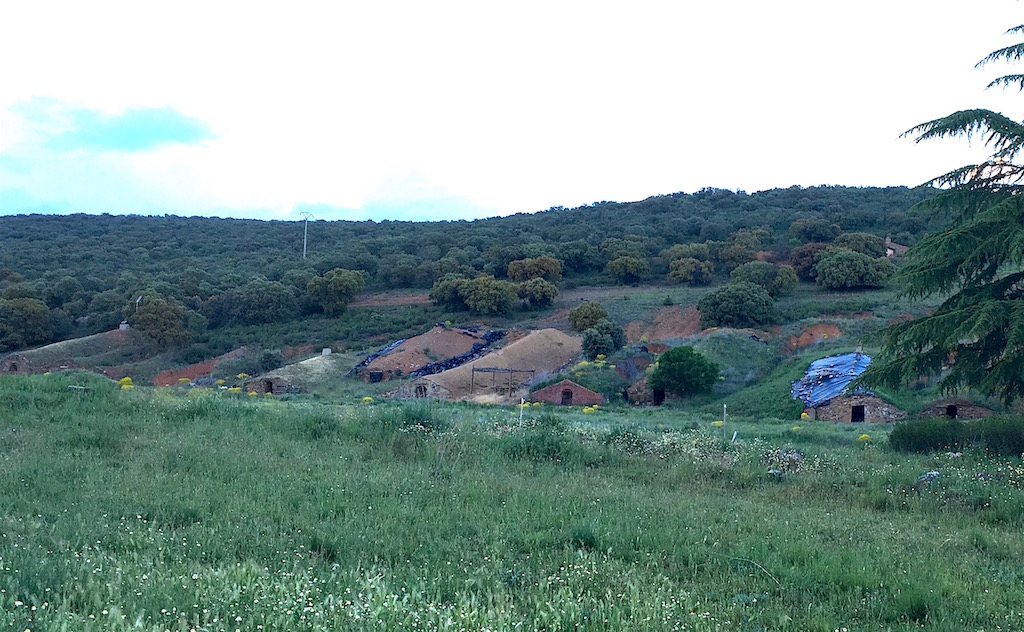 Traditionally, every family had its own bodega. They were used for cold storage of wine, food, and grain. The bodegas also provided a cool refuge from the summer heat. Today, no longer needed just for storage, the bodega is a social place for gathering with friends and family. Solar panels for electricity provide the modern convenience of light.

We first learned about caves like this in The Telling Room, a book by Michael Paterniti. It is a book about cheese, but also about life in a Castilian village. The story unfolds in a bodega cave, which is where stories are told. Paterniti called it “ the place where, on cold winter nights or endless summer days, villagers traded their histories and secrets and dreams.” We’ve been intrigued by these caves ever since.

Martin’s family has two bodegas. The first is 300 years old and the cave goes deep underground into the clay soil. When we walked in, the air was cold. Perfect for storing cured meat and wine, but not so for lounging about eating and drinking it. So we grabbed some supplies and headed further down the road to their “new” bodega. This one is only 100 hundred years old and not as deep. 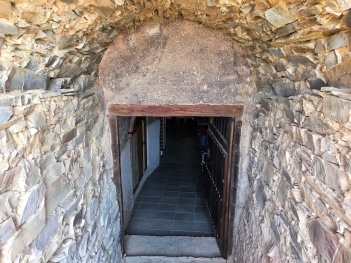 The space is dominated by a large table with plenty of seating. New faces appeared down the stairs and introductions were made. Someone threw a bundle of branches in the fireplace and the cave warmed quickly. A variety of cured meats came out: thick pancetta, spicy chorizo, salchichon and the very precious cecina.

Cecina is a specialty of Castilla y León. It is made from beef in a curing process similar to the way that ham is made from pork. The hindquarters of cattle are salted, air-dried, and cured, sometimes using smoke. Cecina de León bearing the IGP labelling of the Protected Geographical Indication must be aged for a minimum of seven months. Miki translated for us and explained that most of these meats were made by the men sitting around the table.

Big chunks of rustic bread were dipped into olive oil pressed from the olive trees on Martin and his wife’s property in Mallorca. Bottles of red wine, some also homemade, were passed around to keep our glasses full. Though we were strangers that spoke a different language, we were embraced as friends in this warm smokey little hole in the ground.

The next morning, we four Americans took off to get some exercise. Were we the only ones feeling heavy from so much meat? Through the village we recognized faces from the previous night, and everyone greeted us with a sincere “Buenos días!” Our run took us out into the countryside, where a branch of the Camino de Santiago passes through here on its way from Madrid to Santiago de Compostela. We followed dirt paths alongside fields of grains and wildflowers.

It was good to get the exercise, because when we returned home plans were already underway for a special lunch of pollo guisado (chicken stew). A fresh chicken had been butchered and cleaned, and was simmering away in a big pot in the bodega. I’ve never seen such a chicken. Rumor was that it weighed almost 7 kilos with feathers, 5.5 kilos cleaned. That’s 12 pounds of chicken. It had been fattened on lentils and garbanzos and was 6 months old when it met its end earlier that morning.

While we loitered around the bodega entrance waiting for the chicken to cook, we picked sprigs of wild thyme to throw into the pot. The fields are full of wild herbs, fennel, and other edibles to forage, though some are off limits. A sign warns us that it is prohibited to take mushrooms and asparagus from the town lands. 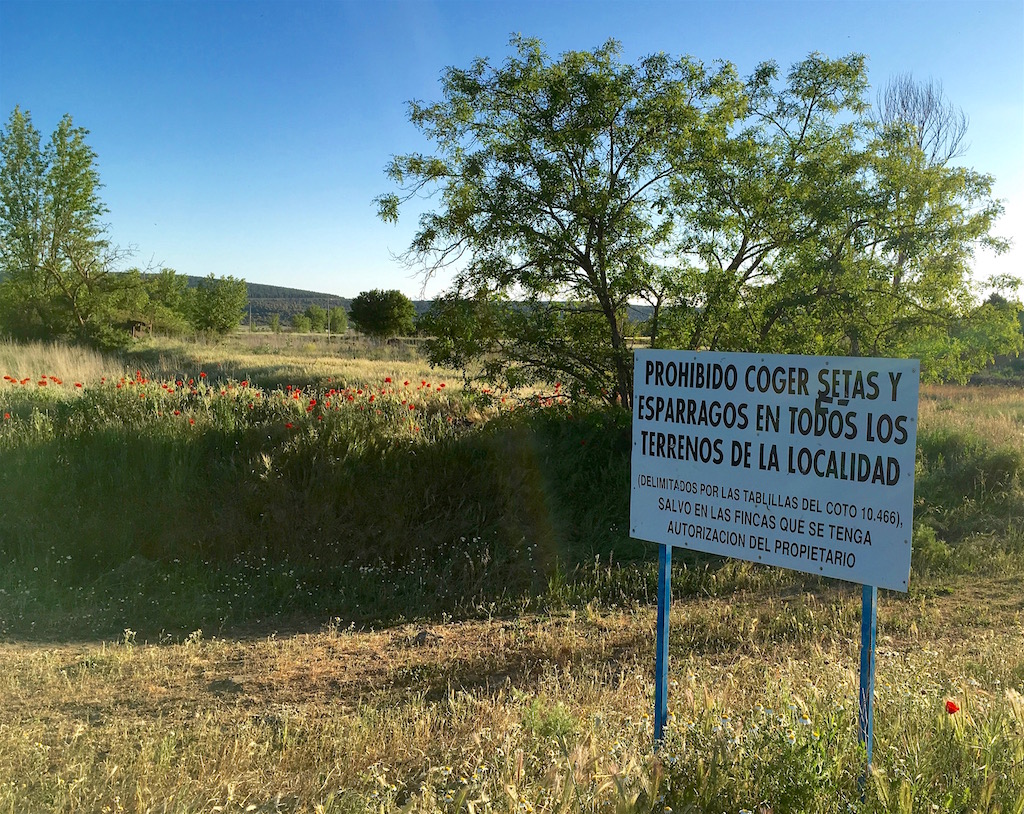 When the stew was finished, that single chicken fed eleven people. This was the first time that we’ve eaten a chicken that was alive earlier the same day. The meat was flavorful and dense. Accompanied by bread, a green salad, and lots of red wine, it made for a hearty meal.

Then the desserts came out. Homemade flan, apple cake, and something we have never heard of—leche frita (fried milk). Leche frita is a typical dessert of Northern Spain. It is made by cooking flour with milk and sugar to form a thick custard, which is then chilled on a tray, sliced, battered, and fried. I’m not sure how this all comes together, but I can tell you that it tastes divine. A drizzle of homemade Orujo blanco, a spirit consumed in northern Spain that is also referred to as Aguardiente (or fire water for good reason), added a flammable kick to the leche frita. 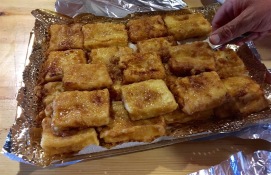 Walking back through the village to take a siesta, we passed by a brightly painted blue door with chickens strutting around in the shadows behind it. A kind woman noticed our curiosity and welcomed us to come inside, where a brood of very healthy, happy chickens lazed about in the dust. I couldn’t help but wonder if our pollo guisado started its morning here behind this door. 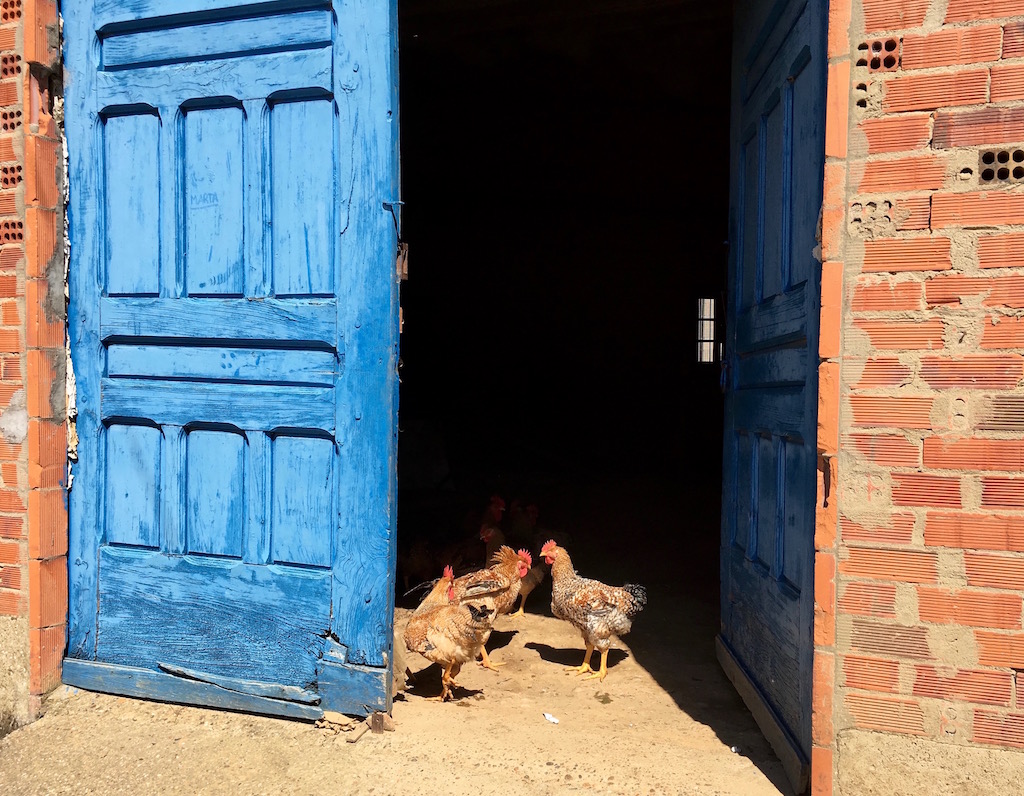 Lunch wasn’t even digested before conversation turned to dinner. We absolutely had to try the local specialty of Ancas de Rana – frog legs. There are a lot of frogs in the rivers of León. We can personally confirm this, because our bedroom backed up to the Órbigo river. As soon as the sun went down, the frogs began a loud chatter that went on all night, like the clacking of castanets, demanding that we keep our windows closed. But we got our revenge in the form of a tasty stew.

A fifteen minute drive away was La Bañeza, a city in the south of the León province that is famous for its frog legs. The traditional recipe stews the legs in a red sauce of paprika, garlic, tomato, onion and pepper; served in a clay pot. One of the best places to eat them is La Hacienda Restaurant, a roadside hotel and restaurant that is part of a service area off the A6 motorway. They have fresh frog legs April through September during the frog fishing season. (Frog season is regulated by law in Castilla y León). We ordered a few racions for takeaway and brought them back to the house for a late night dinner.

The meat itself was very delicate and soft, sliding right off the tiny bones. The spicy sauce, which we sopped up with bread, provided most of the robust flavor. A glass of rosado wine made with the local Prieto Picudo grapes is the preferred beverage to accompany the ancas de rana.

Our final evening was spent, of course, in the bodega. Not a single day passed in Castilla y León that we did not eat cecina. By the end of the weekend, I came to believe that these guys walk around with a chunk of cecina wrapped in their pockets at all times. Pour a glass of wine, and the cecina magically appears. Those enormous loaves of rustic bread were always at hand, as well. I’m not sure where they were hiding them. In a town with no restaurants, you always need to be prepared. 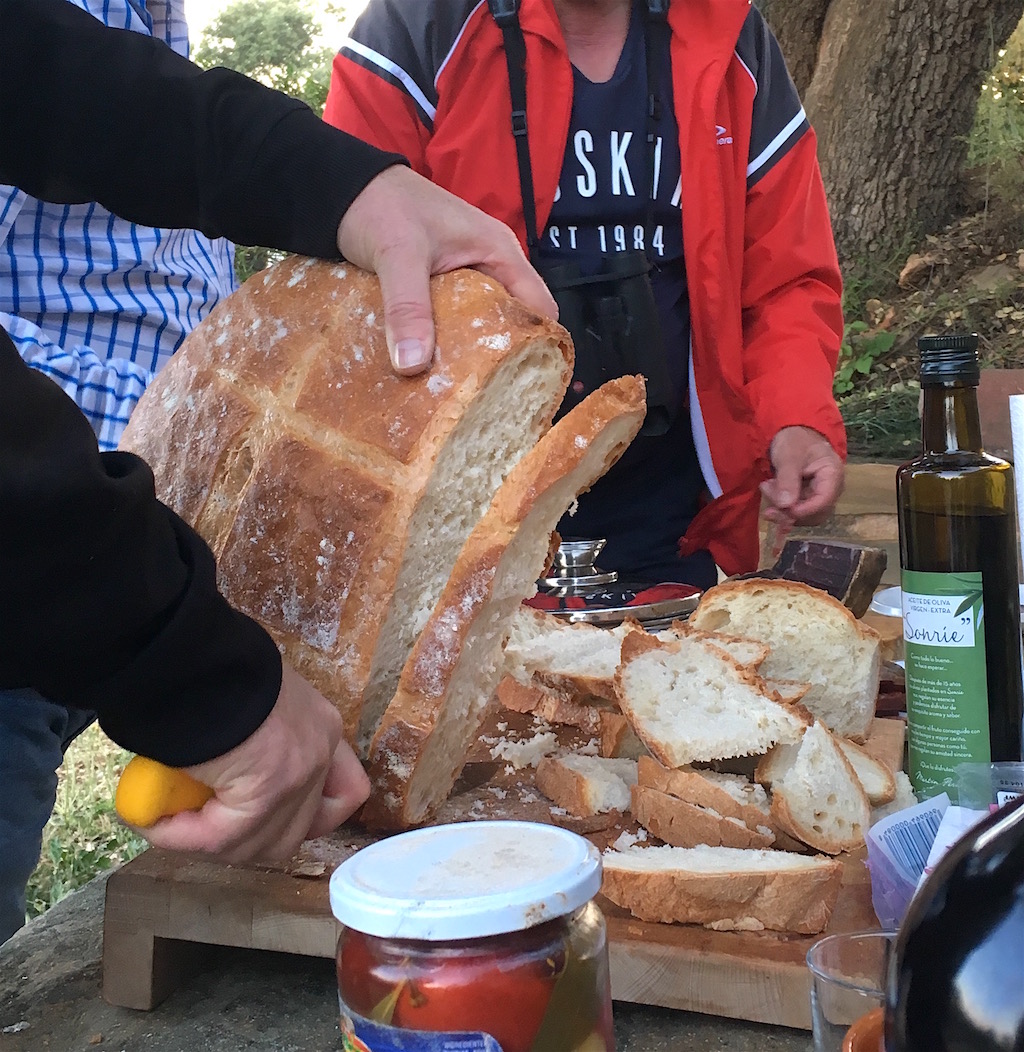 Late one night walking home from the bar, Martin said that he wanted to show us something. The three of us went down to the edge of the river, looked at the impossible abundance of stars in the sky, and listened to the silence. The frogs were the only voices to be heard, and even they were soothing. He told us that this is what he loves about his town. The peacefulness, the beauty. And we are very thankful to him and his wife for sharing their little piece of the Spanish countryside with us. 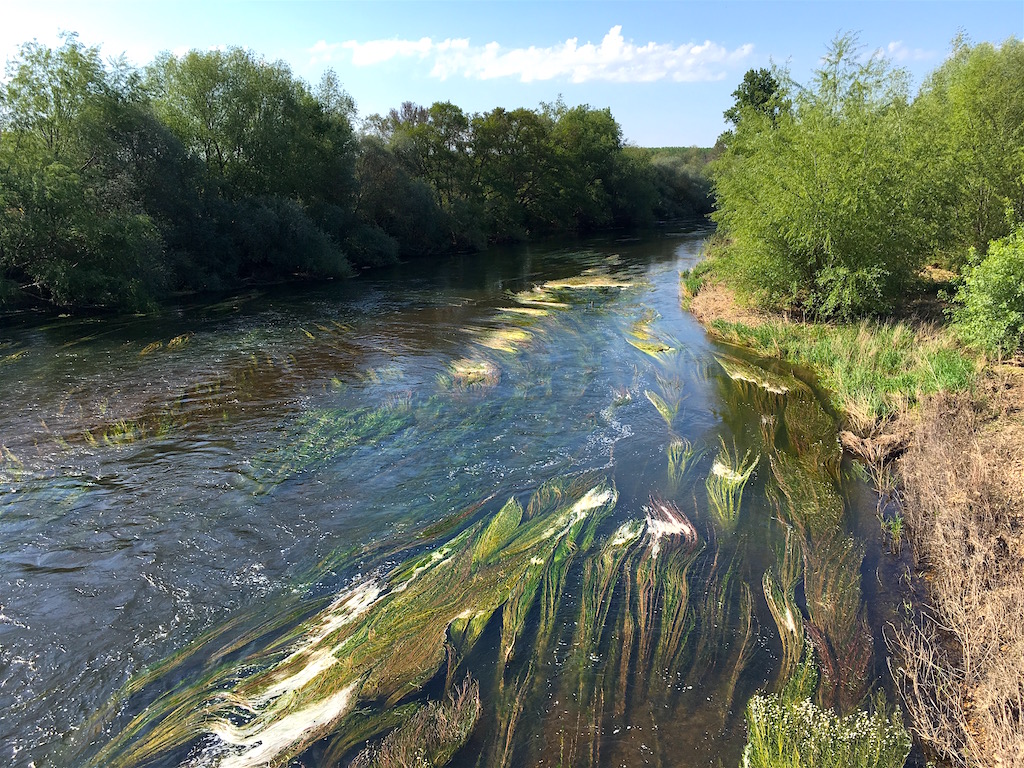 4 responses to “Village Life in Castilla y León: How We Ate and Drank Like Cavemen”

Leave a Reply to Julia B. Wilde Cancel reply