Finding Fusion: The Search for Modern Cuisine in a City Steeped in Tradition

One of the things we enjoy most here in Valencia is the diversity of restaurants available, despite it being a very traditional Spanish city. Fusion restaurants are among some of the most interesting and innovative. I use the term “fusion” loosely, as it’s becoming more commonplace for chefs to explore the cuisines of other cultures and blend them into their dishes in creative ways. What does fusion even mean anymore?

By definition, fusion cuisine “combines elements of different culinary traditions” together to create new dishes. It became trendy in the 1980’s with Wolfgang Puck getting most of the credit for his Asian Fusion creations. These days, fusion is considered by some to be an outdated fad with a bad reputation. Some restaurants steer clear of using it and instead describe their style as world cuisine, or globally inspired. Whatever you call it, it doesn’t change the fact that restaurants blending foods from different cultures are still hugely popular, and the term “fusion” seems to us the most appropriate way to describe this style.

We tend to gravitate toward fusion because we crave new and interesting things. Many of our favorite restaurants have their basis in Mediterranean cuisine while incorporating flavors and styles from other cultures. Searching the internet for fusion restaurants can be frustrating, resulting in lists of restaurants that may or may not fit the bill. Therefore, we have put together a collection of the places we like to go when we want to treat our taste buds to a fusion of cultures.

There are a lot of happy people in Valencia now that Restaurante Karak has reopened in a brand new space in the Hotel One Shot Mercat 09. The new restaurant is divided into two distinct spaces: Zona Barra is an informal bar space with an a la carte menu, while Zona Gastro is a formal dining space where a Degustation Menu is served for €45.

Within days of their reopening we jumped on the chance to have lunch in the Zona Barra, where you can watch the team do their magic in the open kitchen. As soon as we sat down at the bar, we were greeted by Chef Rakel Cernicharo holding a whole fish that she was very excited about. Her enthusiasm and energy spilled out of the kitchen, where she was racing about preparing dishes but still taking time to talk with her customers now and then.

Rakel loves cuisines from all over the world and incorporates them into her food with delightful abandon. The menu is a fusion of culinary styles from Peru, Mexico, Japan, Thailand, you name it, anything goes.

About that fish. They call it Pescado Rabioso, or Furious Fish. A whole fish is hand-rolled in a coating of spices and deep fried. Slits cut along the sides of the fish allow the bold, complex spice mixture to permeate the flesh and make it easy to pull off bite size strips. We were given specific permission to use our fingers and that proved to be the best way to pick it apart. We devoured the whole thing, eagerly digging out the prized cheeks. One fish was a good size for two people to share.

This was followed by Noodles de Rabo de Toro, a dish that overwhelmed with its richness – and I mean that in the best way. Japanese soba noodles with a satisfying al dente bite were slathered in a deep dark sauce of oxtail and earthy wild mushrooms.

Our lunch at the bar was just a sampling of the intriguing dishes on the menu. The degustación menu in the dining room is a whole new experience that you can read about in Karak is Back.

Vuelve Carolina was the second restaurant in Valencia by Chef Quique Dacosta. It’s a great opportunity to sample his creations without the price of his Michelin starred restaurants. It is not likely to come up in a search for fusion restaurants in Valencia, but in my mind it should. The food is creative with influences from Latin America, Asia, and Europe, which they describe as “World cuisine with a twist” on their website. 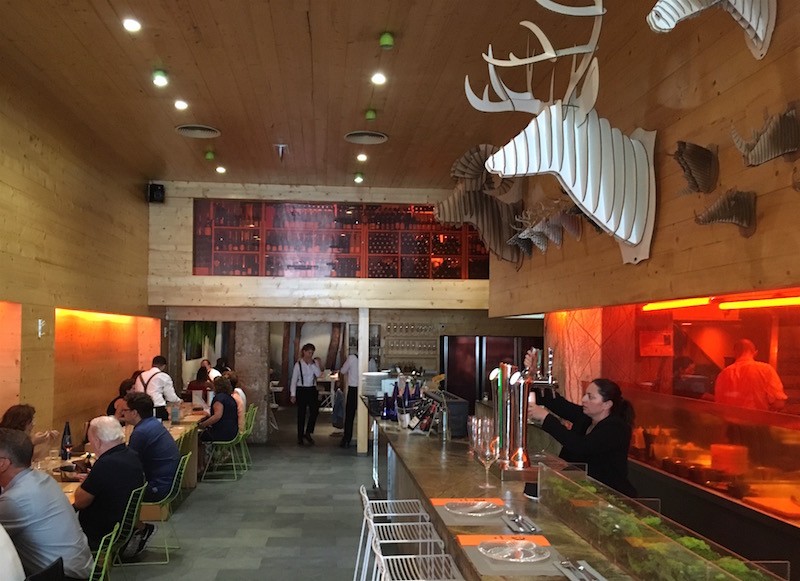 You can watch your food being prepared in the open kitchen displayed behind orange tinted plexiglass. They offer tapas tasting menus and an executive menu, but there are also many tempting items on the regular carta. It was nice to find that the items marked “picante” really did have a little spicy heat to them.

The Pez raya con “sweet chili” is one of those dishes. Pez raya is skate, or ray, and while we see it in the fish markets everywhere we rarely see it on restaurant menus. When we do, we immediately go for it. The meat of skate wing has a very unique texture, similar to crab. I love crab, therefore I love skate. Here it is covered in a sweet red chili sauce that has just a little spicy heat to it. Accompanied by wonderful charred snap peas and crispy spiced cracker bread.

Carrillera guisada, which is stewed beef cheek, also had a “picante” warning for the intense red curry sauce surrounding it. You just know that beef cheek is going to be tender, and this exceeded that expectation. Melt in the mouth may be an overused term, but there’s no better way to describe it. The elements of this dish complemented each other perfectly. It was best eaten by pulling off a chunk of cheek and swiping it through the slightly spicy curry sauce and then the sweet coconut bechamel, incorporating all of the flavors into one mouthful.

We found Casel.la just by walking down Calle Comte d’Altea and noticing that the menu was different from the other restaurants lining the street. Lots of interesting dishes caught our attention. Chef Gustavo Casella is of Italian and Uruguayan nationality. He combines Spanish, Italian, French and South American cuisines, although we see some Asian influences in the menu too. For example, the smoked butterfish comes from Uruguay and is served with a Japanese emulsion. The “sheets” of fish are intensely smoky but soft and buttery due to the high oil content of the fish.

The Italian influence shows in pasta dishes like the Raviolis de Cordero. Lamb filled ravioli is generously covered in a thick deeply tomatoey sauce with red wine. This is a hearty, stick to your ribs kind of dish.

One of our favorite dishes is their Pez de San Pedro. Also called Gallo de San Pedro, (in English it’s John Dory) this fish is native to the Atlantic but also caught along the coast of Valencia and the Balearic Islands. It has a meaty flesh that, in this preparation, is so delicate even the skin dissolves in your mouth. Of course it doesn’t hurt that it is served over creamy lobster bisque adding to velvety feel, making this a very luxurious dish. The simple addition of lime zest freshens the flavors.

The fusion: Asian and European

Anglo-Burmese Chef Steve Anderson opened Ma Khin Cafe in 2014 as a tribute to his great-grandmother. Her name was Ma Khin Hnyaw and she was born in Myanmar (now known as Burma). There she met his great-grandfather, an official in the British civil service. Anderson shares their story on Ma Khin Cafe’s website and reading it gave me a sentimental appreciation for the restaurant and it’s concept – reinterpretation of Colonial Asian food using mediterranean ingredients.

We like Ma Khin Cafe for it’s fresh ingredients and bold flavors. It’s one of the few places that we reliably find veggies incorporated into the meal. Another bonus – they are open all day. Hungry at 5pm? They have an Afternoon Tea and an All Day Menu available between 5 – 8pm. There is an a la carte menu, along with two different tasting menus: Ma Khin Taster for €25 euros and Ma Khin Classics for €32. On our last visit we tried the Ma Khin Taster, which includes 6 dishes plus dessert. Some highlights:

The Ma Khin chicken croquetas had just a touch of coconut added. Totally unexpected in a Spanish croqueta, but a really nice complement to the chicken. Hows that for fusion?

The Burmese shrimp and cabbage salad was a mélange of flavors with prawns, toasted garlic, nuts, ginger, and grapefruit tossed into crisp shredded cabbage.

The steamed bun of the Bao with char siu pork was light and springy and filled with Cantonese-style barbequed pork, a tart pickle and cool shredded radish.

We have previously written about Ma Khin, so for more information check out our post on the Mercado Colon.

Canalla Bistro, Ricard Camarena’s more casual restaurant in Ruzafa, serves eclectic and fun dishes featuring cuisines from all over the world. They just opened a restaurant in Mexico City, which tells you just how much Mexican food has influenced Canalla Bistro’s food, but there are also a lot of Asian touches.

The a la carte menu is full of international treats like Mexican tacos of Rabo de Toro (oxtail), Chinese steamed buns with Beijing pork, and tuna and avocado tartar “pico de gallo” with wasabi mayonnaise – which is a personal favorite.

Of course, there is also their famous Katz’s style “Pastrami” sandwich with house made pastrami that is soft and fatty enough to satisfy any pastrami craving.

For more details and photos of Canalla Bistro, check out our previous post on A Fusion of Flavors in Valencia.

Smoke and Roll opened in the Canovas neighborhood in the winter of 2016, so it’s still fairly new to Valencia. Chef Luca Dessole uses bold flavors in his dishes with influences mainly from Thailand and South America. The sign on the door says “finger food” and they mean it. Everything can be eaten with your hands, although utensils are available if you ask. You’ll find a Peruvian style ceviche of corvina, steamed buns, and an assortment of creatively assembled tacos, like this Vietnamese taco of rich pork belly in a lettuce wrapped “taco”. Served with a thick peanut sauce, it is pure decadence despite the messy fingers. 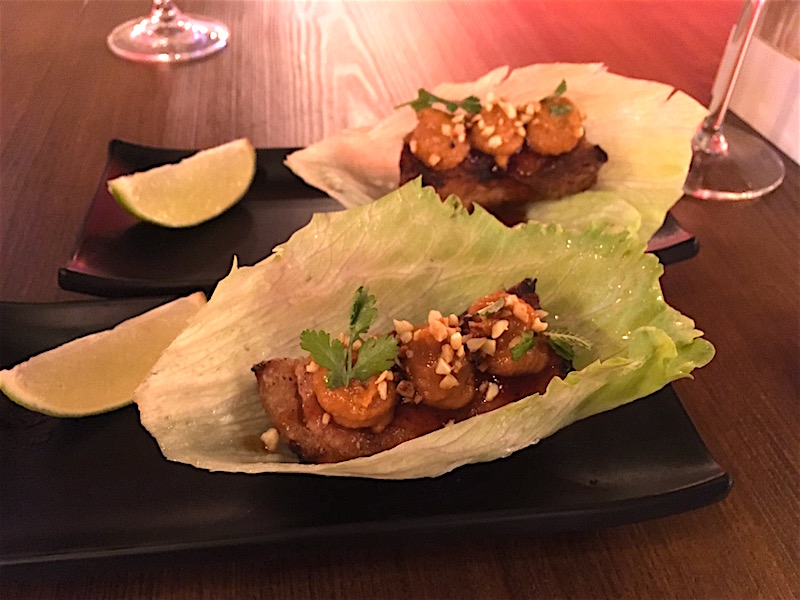 For more details on Smoke and Roll, check out our previous post on Non-Spanish Restaurants in Canovas.

One response to “Finding Fusion: The Search for Modern Cuisine in a City Steeped in Tradition”