Update January 2018: It makes me very sad to see that Atlántico has closed its doors in Valencia. I don’t always understand why some of my favorite restaurants close down. In this case, maybe the location was just enough off the beaten path to prevent walk-in traffic? Out of sight, out of mind? We really enjoyed the food and I would still recommend giving Atlántico a try at one of their other locations in Madrid or Lisbon.

Few things make me happier than finding a new place to enjoy fresh, creative seafood. That’s why I’m so thrilled that Michelin-starred Chef Pepe Solla has selected Valencia for his latest venture, a beautifully designed restaurant showcasing Galician cuisine. When we saw Atlántico Casa de Petiscos opening in Valencia this February, I rushed to read about it and was immediately excited to give it a try.

Petiscos means “snacks” and the concept is perfect for trying different flavors and sharing with friends. The menu is comprised of mostly small plates under €10, including beef, pork, chicken and seafood fresh from Galicia. Some dishes fuse Galician ingredients with influences from around the world, including Mexico where Solla discovered chili peppers. It is a welcome surprise to find a touch of spice here and there. The Spanish don’t tend to like spiciness, so when I read reviews online frequently mentioning that the food is spicy, I knew we would like it there.

Atlántico Casa de Petiscos in Valencia is located across from the Puerta de la Mar; not a bad view while snacking on their patio. The current arch of the Puerta de la Mar is a reporduction that was built in 1946. The old “Gate of the Sea” was here until it was demolished in 1868 when the city walls came down. This was the road from the city to the sea port, a perfect location to enjoy fresh seafood (even if our Galician seafood did come from the Atlantic ocean instead of the Mediterranean.)

We knew we were going all seafood, so we tried a few glasses of white wine from the list of nearly 20 wines by the glass. We liked the Gaba do Xil Godello from the D.O. Valdeorras in Galicia and ordered a bottle for our table of four. We then proceeded to snack our way through these beautiful small plates:

Croquetas de centollo (Spider-crab croquettes) There were nine of these little bites that were super creamy and crabby inside and crispy outside. They might have been small but they packed a lot of flavor. 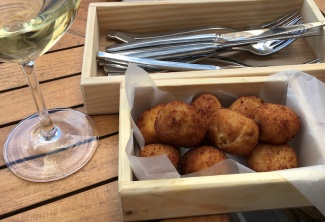 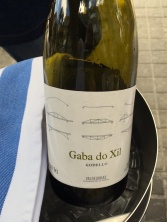 Tartar de Gambas con crema de setas (Shrimp tartare with a wild mushroom sauce) The incredibly silky texture of the raw shrimp was lush and satisfying. Big chunks of mushrooms and a savory sauce added to the unexpected richness of this tartare – unexpected in the best way.

Aguachile de pulpo (Aguachile Octopus) Aguachile is a classic Mexican dish typically made with seafood in a sauce of lime juice, green chili and onion. In this adaptation, tender slices of tentacles were bathed in a mild aguachile sauce with avocado. We always enjoy finding new versions of octopus beyond the traditional Galician style.

Mejillones con salsa de Albarino y puerros (Mussels with sauce of Albariño ad leeks) Beautifully cooked mussels were doused with a creamy white wine sauce and garnished with chopped leeks. The mildly seasoned sauce clung to the meat, complementing without overwhelming the flavor of the mussels.

Zamburinas en salsa agridulce pimenton y algas (Scallops in a spicy paprika sauce) Our server recommended these as a special dish from the Galicia region. Whole body scallops were cooked in a very tasty and spicy paprika sauce. They were delicious but small. If only there had been more on the plate.

Tiramisu Gallego  We don’t typically order desert but everything else was so good that we were tempted. The Tiramisu Gallego was an interpretive take on Italian tiramisu. You had to dig all the way to the bottom of the jar to get a spoonful that encompassed all the traditional tiramisu flavors. There were some non-traditional nuts sprinkled in there. It sparked some debate around the table about whether it could be called tiramisu, but everyone agreed on its yumminess.

Since food is one of my favorite topics to discuss, I love dishes that invite a conversation. Atlántico Casa de Petiscos’ cuisine gave us a lot to talk about. It’s definitely a keeper for us and added to our list of favorites. Our friends visiting Valencia will most likely be forced to eat here, but I doubt we’ll have to twist their arms too hard.

Pig ears are delicious! Who knew? The tacos de oreja de cerdo (pig ear tacos) are a new addition to the menu since our first visit. We tried them on a challenge and were amazed at how good they were. Now we go back specifically for the ears.