Xátiva Spain is a small city with a lot of history. Located about 60 km south of Valencia, Xátiva makes for a quick and fun day trip. It is just under an hour ride on the C-2 regional train (Renfe Cercanías) which leaves from Valencia Nord station approximately every 30 minutes.

View over Xativa and the Collegiate Church from the hillside

We recently took a morning train from Valencia that arrived in Xátiva at 9:43 AM. The city of Xátiva stole our hearts almost immediately. The old quarter of the city is a maze of pedestrian streets paved with stone. Boutiques, bakeries, and cafes are plentiful. This historic area is surrounded by wider more modern streets. No matter where you are, you can’t miss the imposing Castell de Xátiva towering over the city. 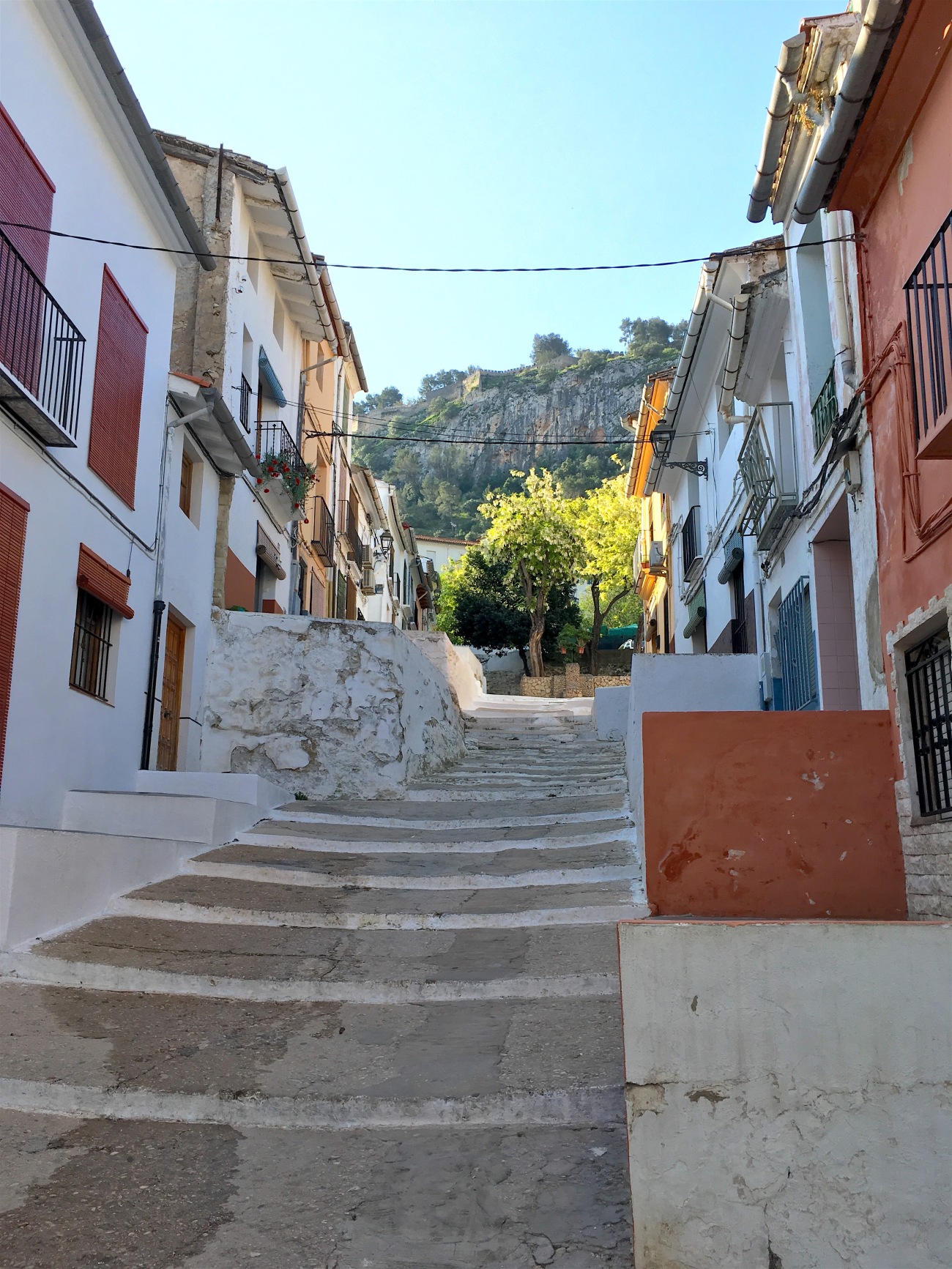 We worked our way through the city and straight up to the castle, which opened at 10:00 AM. It’s a good idea to tackle the castle early in the day before the sun reaches too high. While our April weather was perfect, Xátiva is said to be one of the hottest places in Spain during the summer. The hike up took us more than 30 minutes, but we did a lot of meanering and sightseeing along the way. We stopped at the Arc Daurat sculpture, which was installed in 1992. The two hands holding a pilota ball (pilota is a Valencian handball sport) form an arc over a view of Xativa.

It was a beautiful walk along a winding road lined with wild flowers. There were incredible views down over the city and up to the castle on the hill. The slopes of the hill have been officially declared a “Plant Micro-Reserve” because of the unique flora. This area along the hillside is criss-crossed with walking trails and historic buildings that I’m itching to get back to explore. 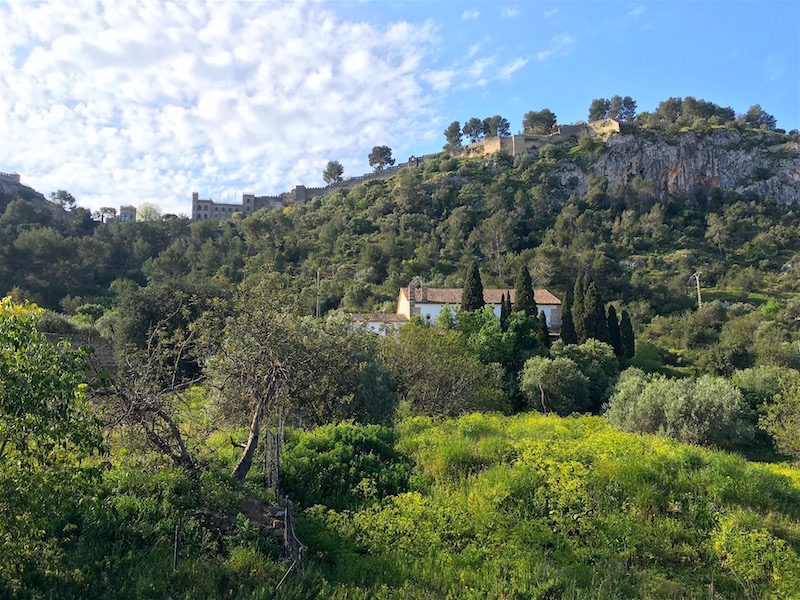 The slopes leading up to the Castell de Xativa

The castle itself is magnificent. Its importance came from its strategic location on an ancient route from Rome down to the Mediterranean coast. On the walk up, we climbed up the Torre del Sol, the castle’s easternmost tower, which was constructed in 1201.

Parts of the castle date from pre-Roman times. In one of the oldest sections, called the Queen’s Tower, Hannibal’s wife supposedly gave birth to a son in 218 B.C. The newer sections of the castle were built during Medieval times. You could spend hours climbing the castle steps and peering out windows overlooking the valley below.

Entrance to the Castell de Xátiva

A group of school children at the Xativa Castle

There is a restaurant just inside the castle entrance, called El Mirador Del Castell, with a stunning view over the city. With more time, this would be a perfect spot to get a cerveza and a tapa or sandwich. Next time! 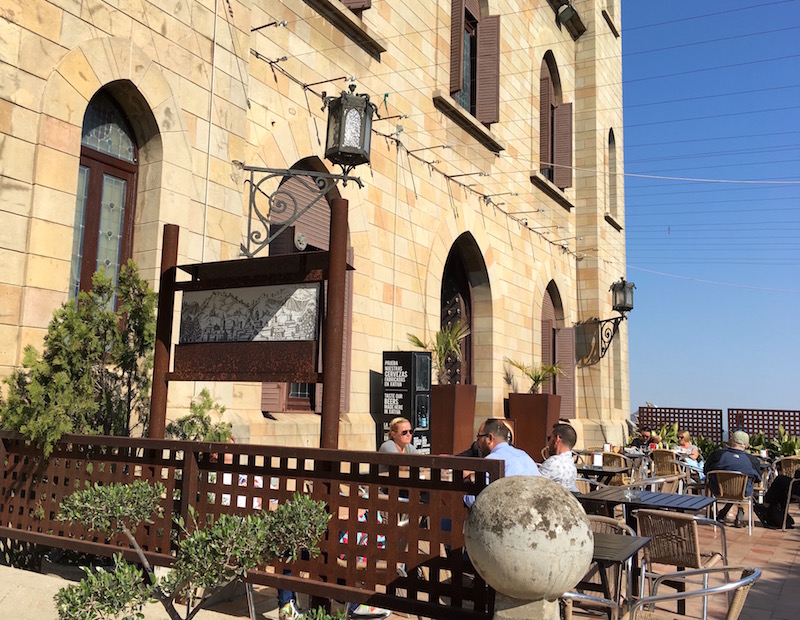 On our way back down through the city, we stopped into the Convent of Sant Domènec, a former Dominican convent that was built in the 14th century. The Gothic church of the convent has been restored inside and is now a beautiful sociocultural space used for conferences and expositions.

Housed there were costumes for the Corpus de Xátiva festival. These costumes are called gigantes (giants), and are actually worn by people in the procession of the Corpus Christi, a religious festival normally celebrated on the Thursday after Trinity Sunday, which typically lands in June.

The gigantes of the Corpus de Xativa Festival

Just a few steps away to the east is the Plaza de Calixto III, a wide open square that is flanked by two of the most important buildings in the city. On one side is the Hospital Reial, which was founded as a Royal Hospital in 1244. It was rebuilt in the 16th century and the building is still used as a medical clinic. This is pretty spectacular for a public health building, which on Google Maps is listed as the Centro de Salud Pública de Xátiva. 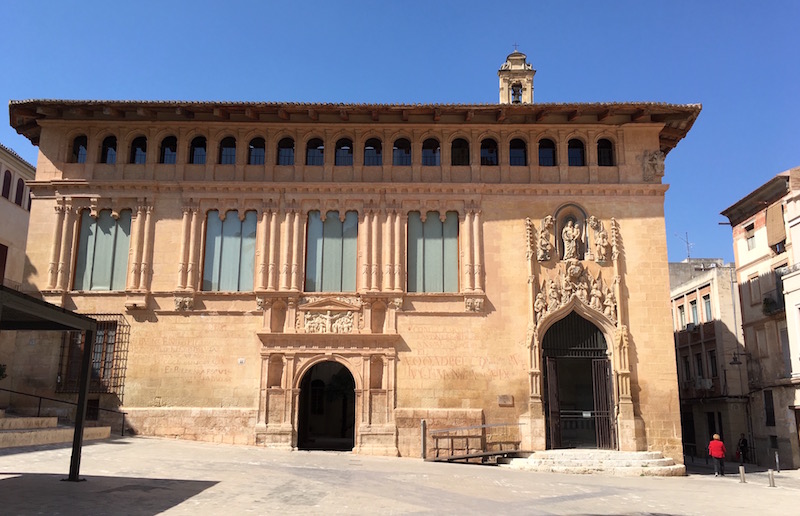 On the other side of the plaza is the Collegiate Basilica of Santa Maria of Xátiva. The Collegiate, also called La Seu, is the main Roman Catholic church of Xátiva. The church was tranquil and peaceful inside. There were no other tourists that day, despite it being a beautiful day in April. The church was built on the site of an old mosque beginning in 1596 and took until the 19th century to be completed.

One of our favorite artesanal breweries in Spain – La Socarrada – is located in Xátiva. They only do tastings and tours on Saturdays with an appointment. We were there during the week, so we were out of luck. However, we were able to chat with Sergio, one of the brewery’s founders. They were in the process of bottling their most recent batch of La Socarrada and offered us a taste. He described their philosophy of beer making and how they want their beers to have a sense of the place that they come from. For example, La Socarrada has the taste of the rosemary that grows throughout the countryside; Orange Saison gets its flavor from Valencian oranges; and Er Boquerón is made with purified Mediterranean sea water.

We purchased a few bottles of the “Sra. Malt Worth”, which is only available at the brewery, to take home with us. We’ll have to come back on a Saturday for the rest. Sergio said that demand is high, so tours may need to be booked a month in advance. Also, they stop doing tours during the summer, beginning in mid-July, due to the intense heat. Did I mention that Xátiva gets hot?

The gastronomy in Xátiva centers around rice dishes – this is still the Valencian Community after all. There are numerous restaurants in Xátiva that look interesting and worth a try. We walked around the city to window shop for a lunch spot and selected Canela y Clavo.

They offered a lunch Menu Diario for only €6.60. We had to be different and decided to order from the regular menu, where a few items had caught our attention. We started the meal with an appetizer of Vieira asada, consome de tapioca (grilled sea scallops with tapioca consome) that completely changed our perception of tapioca. Since we ordered the dish to share, they very kindly split it into two bowls. The scallops were perfectly cooked – hot throughout but maintained a buttery texture. Tender artichokes accompanied them in a savory broth with beads of tapioca.

We also really enjoyed the rice dish that we selected – Arroz meloso de pato, setas, foie y truffles. This was a creamy rice with duck and mushrooms. Slices of foie gras were layered on top, the rich flavor melting down and permeating the rice. The server then grated a surprising amount of fresh truffle on top of the whole thing. This dish was pure decadence! 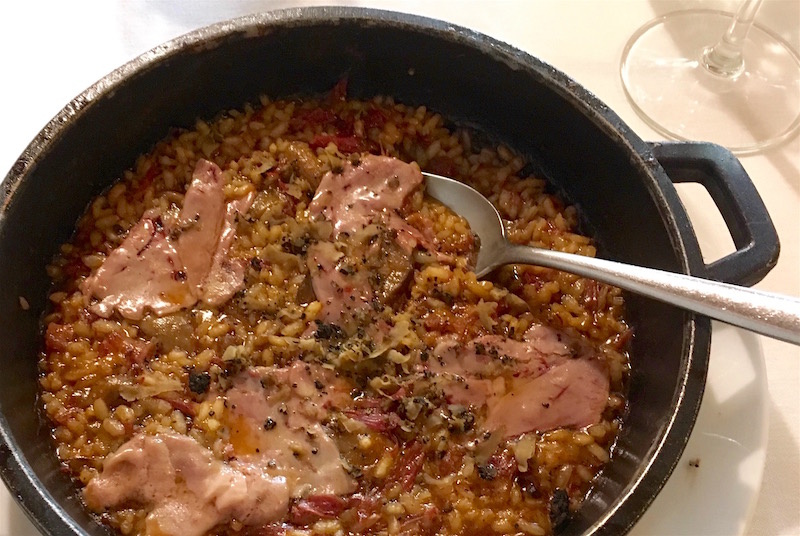 After lunch we walked around the historic area hoping to find a spot for an after-lunch digestive. Instead, we found that the city literally closed up at 4:00. I’m not exaggerating when I say that bar owners grabbed their doors and swung them shut when they saw us coming. However, it was a great time to grab something sweet. Apparently that is the thing to do at 4:00, as there were a number of shops open serving gelato and pastries, and families with children lined out the doors.

We thought briefly of catching the next train home but decided to hang around because we wanted to see the city after dark. We persevered in our search and finally found Tipics Alameda. We sat on the terrace at Tipics lingering over glasses of vermouth during the down time. We noticed more people in the street starting around 6:00 and by 7:00 the streets were full again.

We joined a crowd lounging in the sidewalk tables at L’Iberic de Xátiva, a gourmet shop that specializes in Iberian products. This was the perfect place for a snack of a little jamon sandwich and glass of wine. It was worth staying to see the castle light up over the town. 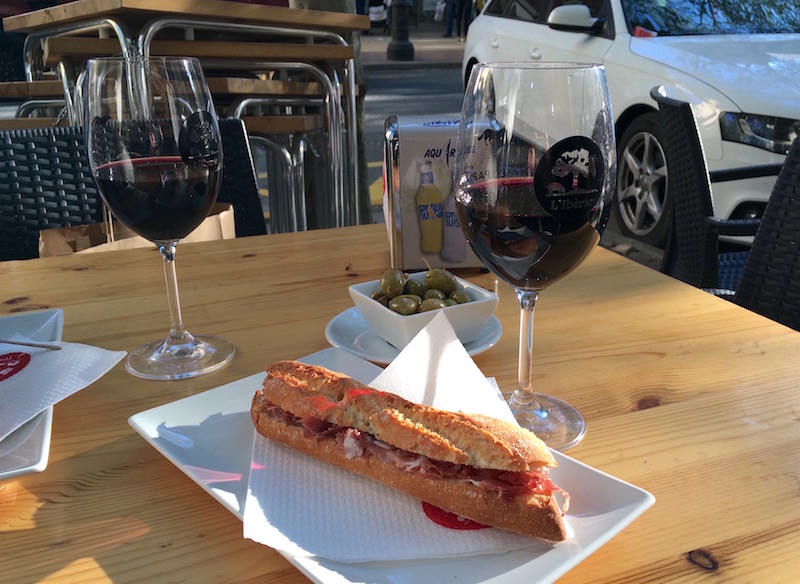 Evening trains back to Valencia depart approximately every 30 minutes until 10PM (on the current schedule the last train to Valencia leaves at 22:05). It’s nice to know that we can spend the evening in Xativa then hop on a train and be home in an hour.

We only scratched the surface of the historic sights to see in Xátiva. There are numerous buildings from the 13th to 15th centuries, museums, markets and restaurants that we would love to return to visit. Fortunately, the frequent trains make it so easy to come back again and again.

Happy Easter everyone! Today on the blog: Pea Soup with Fennel and Greens, topped with bacon...a soup recipe perfect for Spring...when you really want it to be warm and sunny but the weather isn’t cooperating 🌞🌨#peasoup #fennelseeds #warmsoup #springrecipes
Didn’t even need a hangover to thoroughly enjoy this bright, lively Corpse Reviver No.10 @tenthwardco #corpsereviver #absinthenouvelle #absinthe #tenthwarddistillery #marylanddistilling #craftspirits
Follow Julia Eats on WordPress.com