We’ve climbed the towers of Notre Dame overlooking Paris and braved the crowds to see the Duomo in Florence; both awe-inspiring cathedrals. After these spectacular feats of architecture, I was not prepared for the special sense of pride that I felt the first time we walked into Washington National Cathedral. This was America’s cathedral…our cathedral…my cathedral! And it was stunning.

Officially named the Cathedral Church of Saint Peter and Saint Paul in the City and Diocese of Washington, the Washington National Cathedral is the sixth largest in the world and the second largest in the country. Although it is officially Episcopalian, people of all backgrounds and faiths are welcome. In addition to the expected religious symbols, the Cathedral is filled with symbols of national historic significance. Intricate iconography is used to tell stories through symbols and patterns.

We recently took the 30 minute docent guided tour which was full of information and well worth the time. The Self-Guided Tour pamphlet also provided a good overview of the Cathedral’s complex iconography. Before you go, be sure to check the National Cathedral website for events that may interrupt the scheduled guided tours and visiting hours.

The Episcopal founders formed the first Cathedral committee in 1891. They purchased 53 acres of land to form a place of national significance for worship and presented the proposal to congress. Congress established the National Cathedral but, not surprisingly, offered no federal funding. The construction was completed entirely through private donations and today the National Cathedral still does not receive any support from the federal government or any church denomination.

The Cathedral’s foundation stone was set in 1907 And construction was completed 83 years later in 1990. The architecture is traditional Gothic style in cruciform shape with flying buttresses, pointed arches, and ribbed vaulting. There are 231 stained glass windows, including three rose windows to the north, south, and west.

We visited in the afternoon as the setting sun spilled colors through the West Rose Window, which overlooks the long nave of the Cathedral where flags for all 50 states hang along the walls. A prayer is said for a different state on each successive week.

Also along the sides of the nave are 16 Memorial Bays, eight on each side. The stained glass windows of these bays depict scenes of historical significance. The Self-Guided Tour pamphlet includes a description of each bay. My personal favorite is the Henry White Bay, which contains symbols of peace and universal unity. I was surprised to see the atomic structure depicting the peaceful use of nuclear energy.

Another popular feature of this main hall is the Science and Technology Window, also called the Space Window. A black basalt moon rock brought back by the crew of Apollo 11 is embedded in the center, surrounded by planets and stars.

There are nine chapels within the cathedral to explore, five on the main nave level and four on the lower crypt level. The Bethlehem Chapel was the first part of the cathedral to be completed and was the site of the first service held in 1912.

The Great Organ was installed in 1938 and has been expanded over the years to presently contain 10,647 pipes. It is one of the 20 largest pipe organs in the world. Concerts and organ recitals take place throughout the year. Some are ticketed events, but every Sunday afternoon at 5:15 there is a free recital open to the public – they only ask for a $10 suggested donation.

Strolling through the cathedral studying the artistry and architecture with the music of a gigantic pipe organ filling the air is a remarkable experience, stimulating the mind and, at least for me, the appetite. Luckily, one of our all-time favorite spots – 2Amys – is a mere two blocks away on Macomb Street.

Chef and owner Peter Pastan’s restaurant is named after his wife Amy, and good friend/business partner Amy Morgan. They have been serving D.O.C. certified Neopolitan wood-fired pizza since 2001. This place is very popular and the wait for a table can be long during prime dinner hours, when the lively dining area is filled with families enjoying pizza.

We always head straight to the wine bar in the back. The beautiful ingredients that make up the small plates are displayed along the small eight-seat bar. Bowls of salt-cured anchovies, sardines, and seasonal vegetables sit next to plates of sheep ricotta and a variety of crostini. House-cured meats hang on the wall. 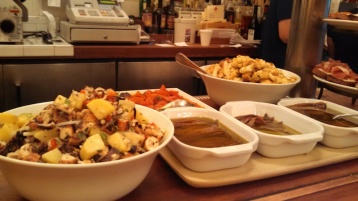 The selection always changes – there might be an octopus and potato salad or roasted cauliflower with garlic, anchovy and hot pepper. A porchetta is prepared on Saturdays, sliced and served with cannellini beans and braised rapini. All look so tempting that it’s hard to choose. We end up ordering too much but have never regretted it and never left a bite behind on our plate.

There is a good selection of wines by the glass or bottle, with many southern Italian wines that pair well with the food. Our go-to bottle is the Mastroberardino Mastro Aglianico Campania made from 100% Aglianico grapes. They also have beer on tap and interesting cocktails, many with an Italian flair. A Tuscarita, made with grappa, house-made Limoncello and fresh lime juice, might be just what is needed after such a satisfying meal.