Craft distillers and brewers continue to thrive in Frederick Maryland, and we continue to try to visit more of them whenever we are in town. We published our first article on Craft Spirits and Brews in Downtown Frederick in the spring of 2018. Here, Part 2 adds to that list. On our most recent trip, we revisited a few of those favorites, including Tenth Ward Distilling Company to check out their expansion. We finally made it to Dragon Distilling which we had heard so much about, and we added three more breweries to our list (Idiom Brewing, Rockwell Brewery, and Midnight Run Brewing).

Our list is still nowhere near complete, and probably never will be. New craft breweries continue to open in Frederick County. My current count is at least eleven breweries as of May 2019. That number doesn’t include the handful of farm breweries out there, which we haven’t even begun to explore. The Maryland General Assembly is making things easier for both distillers and brewers by passing a pair of new laws that take effect on July 1, 2019. The Brewer Modernization Act of 2019 increases the number of barrels of beer that can be brewed each year and allows microbreweries to sell more beer in their tap rooms. A second law allows licensed craft distilleries to sell mixed drinks to showcase their products. Makes perfect sense, considering that most people consume spirits in cocktails rather than straight up.

Dragon Distillery was Frederick’s first, opening in February 2016. Dragon is a veteran owned distillery that specializes in small-batch artisanal vodka, whiskey, gin and rum. A mere $5.00 per person gets you a tour and tasting. Founder and Owner Mark Lambert gave us a tour of the facility with a detailed description of the process, including the use of this beautiful dual kettle Figgins Reciprocating Still. We were also treated to some good family stories. Lambert’s great grandfather was a bootlegger and the Bad Bill Tutt’s Moonshine is based on an old family recipe.

The tasting included four tastes from the list of a dozen spirits plus canned cocktails, and you get to keep the souvenir shot glass. Since there were two of us, we each selected four different spirits and shared the eight between us.

Dragon Dog Frederick Rye Whiskey is a collaboration with Flying Dog Brewery using the mash from the Rye beer to distill a Rye whiskey. We also enjoyed their seasonal release of Fear the Dragon Whiskey, which was made from the mash of Flying Dog’s Imperial Pumpkin Ale called “The Fear”. The resulting whiskey had subtle pumpkin and baking spice flavors. 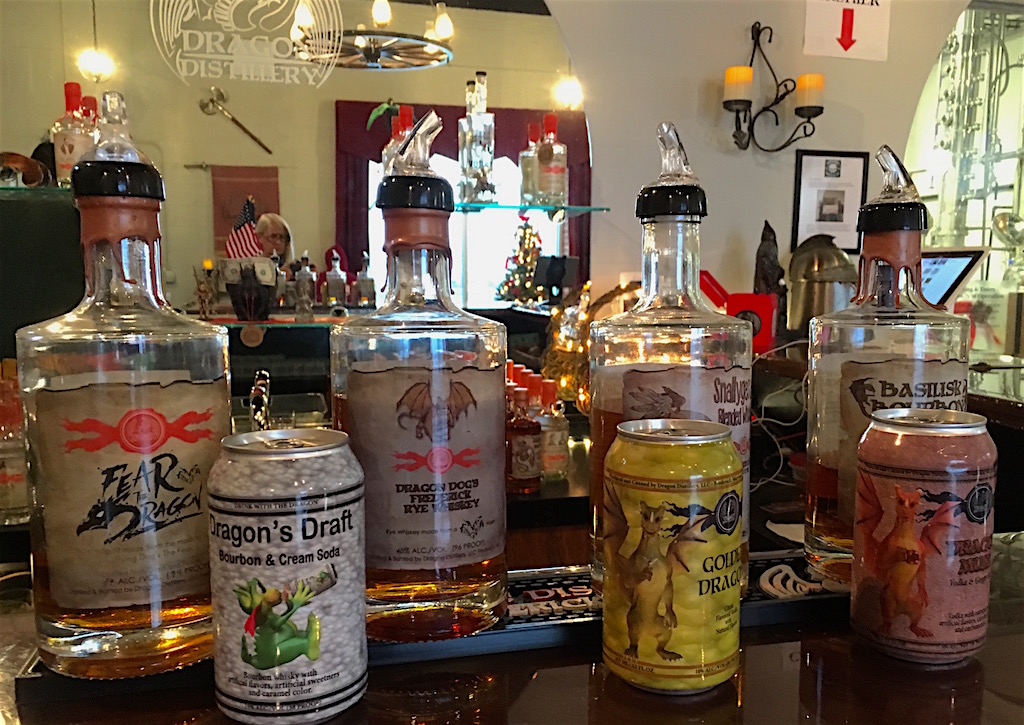 We tried one of Dragon’s ready-to-drink canned cocktails. Their version of a Moscow Mule, the Dragon Mule, was dangerously delicious at 20 proof. Just remember there are 3 shots of vodka in each can! Ask about the Snallygaster Blended Whiskey and you’ll get another local story of a mythical dragon-like monster said to roam the mountains of Frederick County. As a former Frederick local, the story sounded eerily familiar to me. I proudly toasted to his legend.

We wrote about Tenth Ward in our previous article, but a lot has changed since then. We visited their new location in a historic building downtown at 55 East Patrick Street. While their distilling still takes place in the building on Church Street, the new space is much larger and includes a tasting bar, barrel room, and an event space called “The Whiskey Hall” for weddings and other private events.

Tasting flights are available for $5.00. We were exciting to try their Absinthe Nouvelle, the first absinthe to be produced in Maryland. It is 140 proof (70% alcohol) in the bottle and needs to be diluted before drinking. They “louche” the absinthe before tasting, which is the process of slowly dripping water into the spirit, transforming it into a milky solution. This softens the alcohol, bringing out the herbal and floral notes.

Coming in July 2019, Tenth Ward will open The Cocktail Lab, where you can try cocktails crafted from Tenth Ward’s spirits. As you can see, things are changing rapidly for Tenth Ward Distilling, so check their website for current information on tours, tastings, and events.

Idiom Brewing Company has a great location in the rehabilitated historic Union Mills building along Carroll Creek. They expect to have creekside outdoor seating ready at the beginning of June. I predict that this patio is going to be a very popular spot.

Idiom’s founder Michael Clements is also the brewmaster, owner, and manager. A home brewer for over 10 years, he was inspired by visiting craft breweries in Portland, Oregon. Since then, he and his wife dreamed of opening a brewery. They opened at the end of November 2018, just a few days before we visited. At that time, the tap list was limited to just four beers but it was a good introduction. 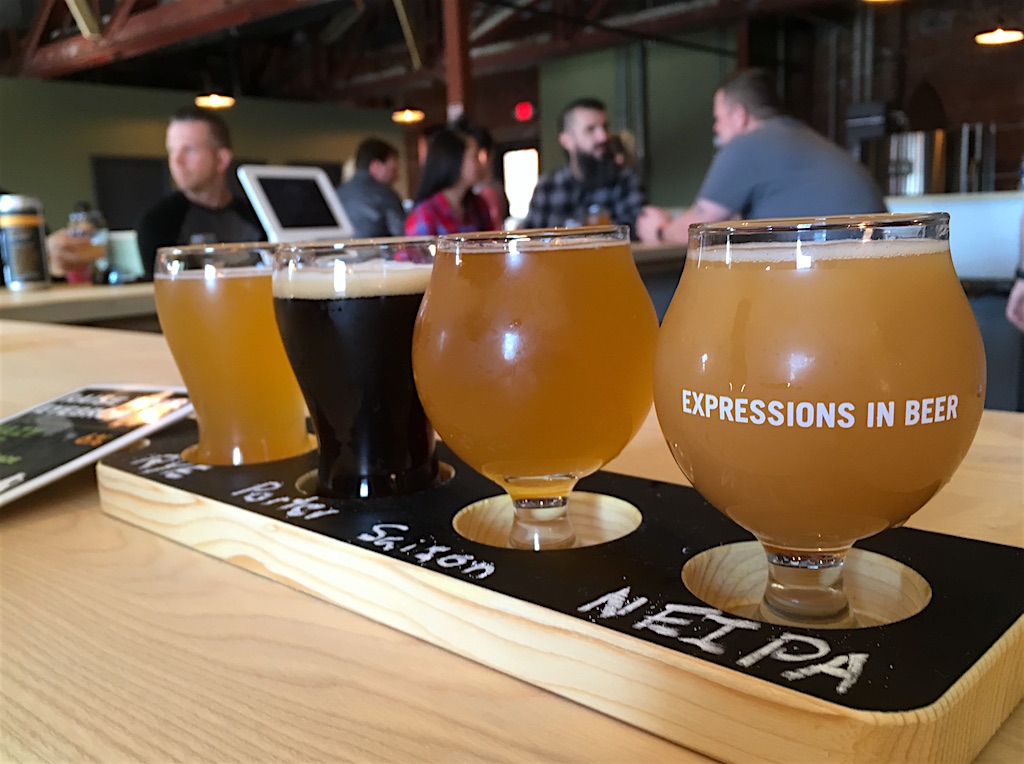 We sampled a delicious Saison, a super hazy NEIPA, a smooth Porter, and a really smooth hazy rye called Raise Your Eyebrow. We saw that there were lots of good sounding stuff coming up, including some barrel aging. They now have 10 beers on tap with a wide range of styles including a Double NEIPA, Imperial Milk Stout, a Sour IPA, and a salty Gose. You can get beer flights or full pours. For food, check out their Facebook page to see which food truck is going to be there.

If you like bold high alcohol beers, then this is the place for you. Midnight Run is a small brewery that makes big beers. They are located about one mile outside of the city center on North East Street. The space looks small, but the tap room is just a third of the space they have. The remainder of the space is where the brewing is done onsite. As with many owners of craft breweries, Rich Cauble and Brent Turner started as home brewers. They opened Midnight Run in November 2017. Calling themselves “brewers of non-conformist ales”, they produce beers that don’t necessarily fit into traditional styles.

There are 8 beers on tap, strong beers with high alcohol and big flavors. We did a flight of four beers for $12. The White Devil, a Belgian golden quadruple was smooth despite its 11% ABV. We also enjoyed the Timeloop IPA, one of their lower alcohol beers at 7.4% ABV. 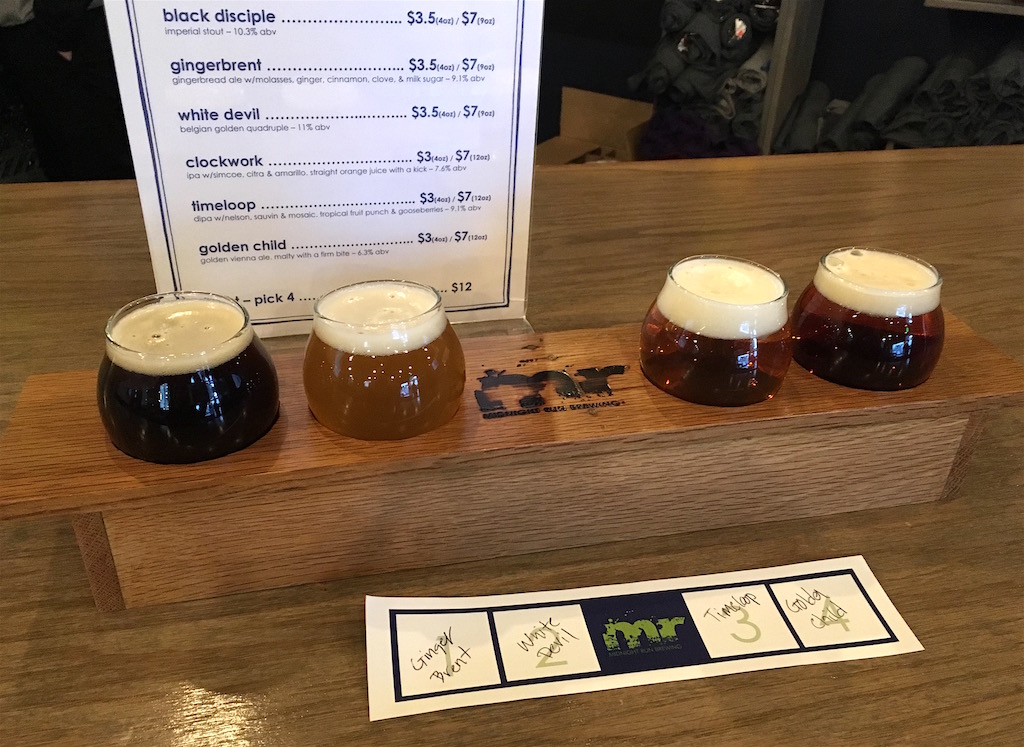 Check the website and Facebook page for new releases. I saw that they recently released a McClintock Rye whiskey barrel-aged version of their belgian golden quadrupel that sounds delicious.

Home-brewing friends and co-owners Paul Tinney and Matt Thrasher refurbished the former Nissan dealership on N. East St and transformed the space into Rockwell Brewery, which opened in March 2017. The large beer garden in front of the brewery would be a fun spot in nice weather, while the big indoor taproom has a cool, open, warehouse vibe. 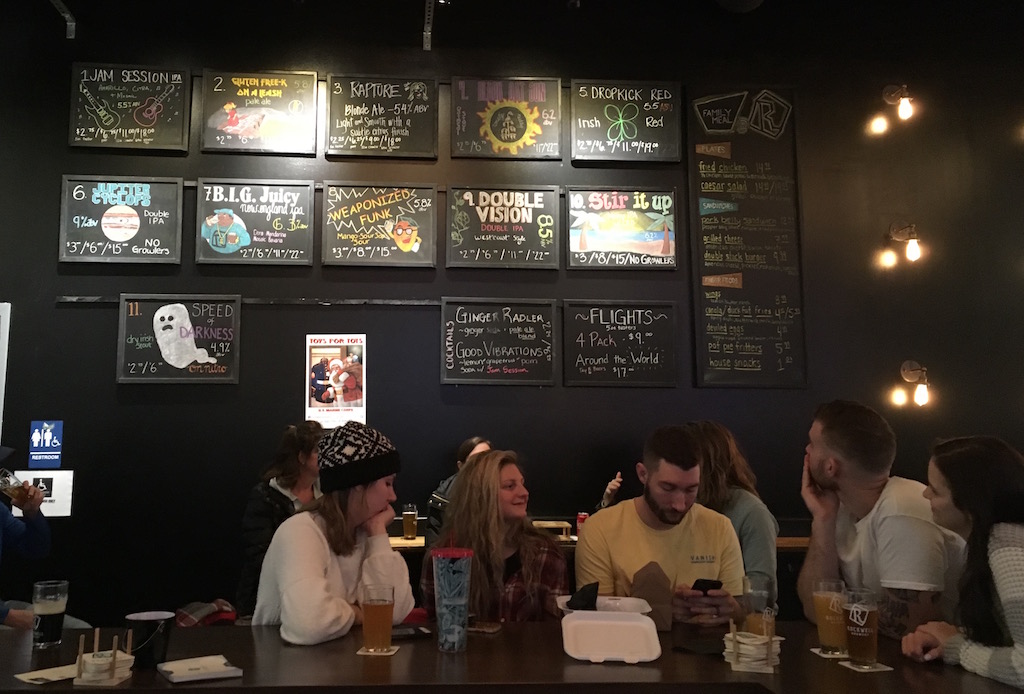 They have a dozen beers on tap representing a wide range of styles, including traditional beers like blondes, IPA’s, red ales, porters and stouts. There might also be a salty gose or even a barrel-aged Imperial stout. Something to please everyone. Beers are available in 5 ounce tasters or full pours. We did a flight of four tasters for $9, including the DropKick Red Irish Red Ale and the B.I.G. Juicy NEIPA which were both very good.

Rockwell Brewery sits in the parking lot behind Family Meal, celebrity chef Bryan Voltaggio’s diner-style restaurant in a building that was also part of the Nissan dealership. Family Meal and Rockwell have partnered to supply patrons of the brewery with delicious beer-friendly food. You can order from a select menu that changes but might include sandwiches, pickle-brined fried chicken, and finger foods like duck fat fries or chicken pot pie fritters. We ordered a sandwich at the brewery, which arrived hot and fresh.

When it comes to traveling between the downtown brewers, the Frederick Brew Bus is a fun and convenient option. The Brew Bus makes stops at five breweries: Flying Dog, Olde Mother, Idiom, Attaboy, and Rockwell. Midnight Run is just a 5 minute walk from Rockwell, so you could also easily access them from the bus. You can just hop on and hop off at any of the stops, paying $5 per stop or $25 for an all day pass.