One part of Spain that we really wanted to experience but had yet to visit was Galicia. The autonomous community of Galicia is in the northwest corner of the country along the Atlantic ocean. Galicia is part of “green” Spain, a name given to the north coast of Spain because its wet, mild Oceanic climate creates a lush green environment so different from dry countryside of the rest of Spain. Galicia’s cold waters are home to some of the best seafood in Spain. 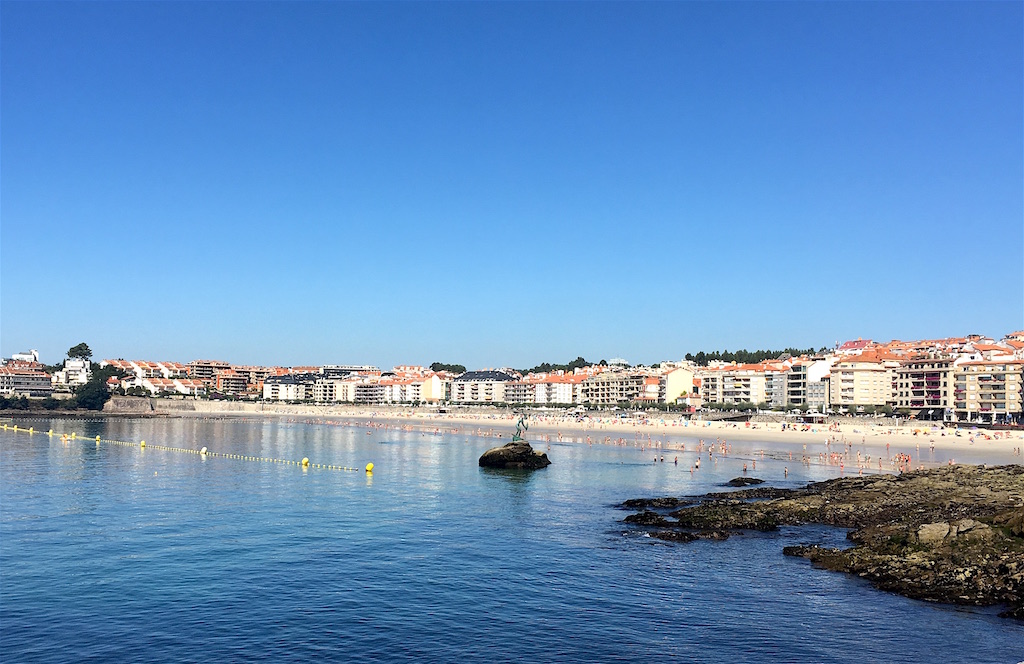 Our destination was Sanxenxo, a resort town on the Atlantic coast. Sanxenxo is a popular destination for Spanish tourists, especially Galicians that live nearby in Pontevedra or Vigo. We selected it because we were looking for a spa-like retreat to relax for a few days. We didn’t want to fill our time with sightseeing or schedule dinner reservations. We were also very aware that we would be in the heart of the Rías Baixas wine region, so we knew we could find great wine to go with all of the seafood we planned to eat.

After a long five-hour drive, including a harrowing detour through the mountains of Galicia that we shouldn’t have taken, we were beat. It was an immediate relief to pull into the Augusta Spa Resort. We were looking for a place to relax and this was perfect. After checking in, we headed to the pool straightaway.

Just one of the eight pools at Augusta Spa Resort

Augusta Spa Resort is comprised of two main buildings with eight pools and nine jacuzzies shared between them. We spent our days rotating between floating in a pool and soaking in a jacuzzi. We dried off occasionally for drinks, food, and conversation with our bartender Andres at the outdoor bar. He served a nice Albariño wine by the glass and the spider-crab croquetas were fantastic, so of course we ate them every day.

The view from our room. We spent a lot of time in that jacuzzi.

The town of Sanxenxo climbs up along the hillside. One of the first things that stood out to me was the abundance of heavy stone. Eighty-percent of Spanish granite comes from Galicia and it is found all over Sanxenxo, where it is used to build sturdy houses and stone walls. We were very curious about these granite structures called horreos, which we saw next to the gardens of several homes. They are used for grain storage, built on stilts to keep the grain away from the wet ground. We also encountered granite crosses, called cruceiros, at seemingly random locations around the town. 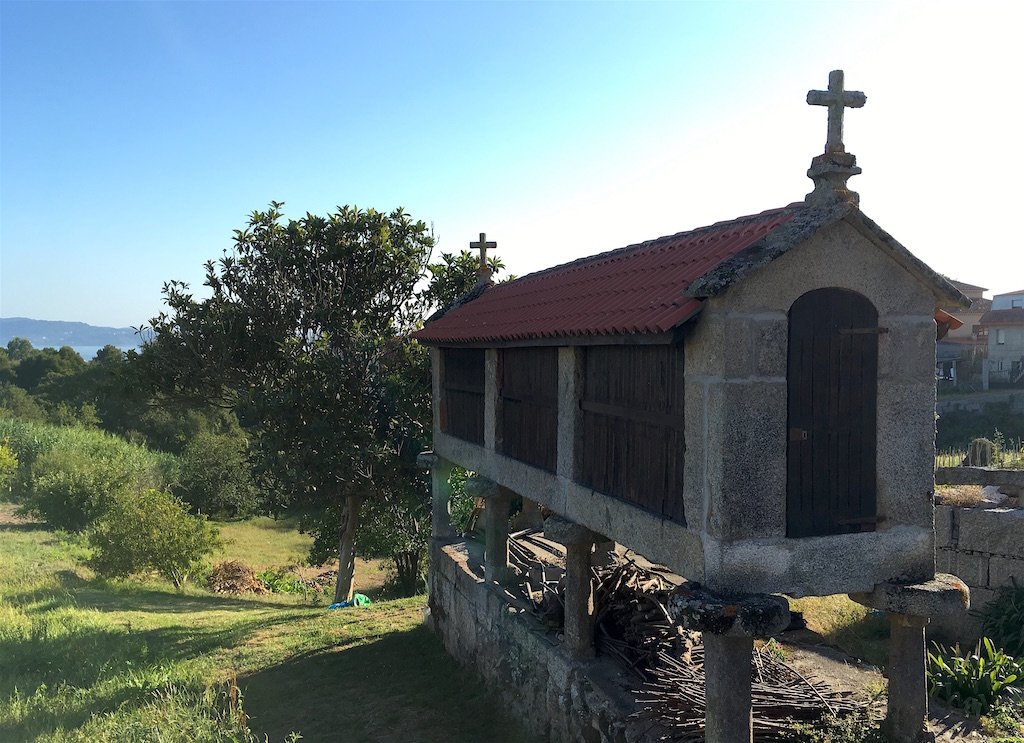 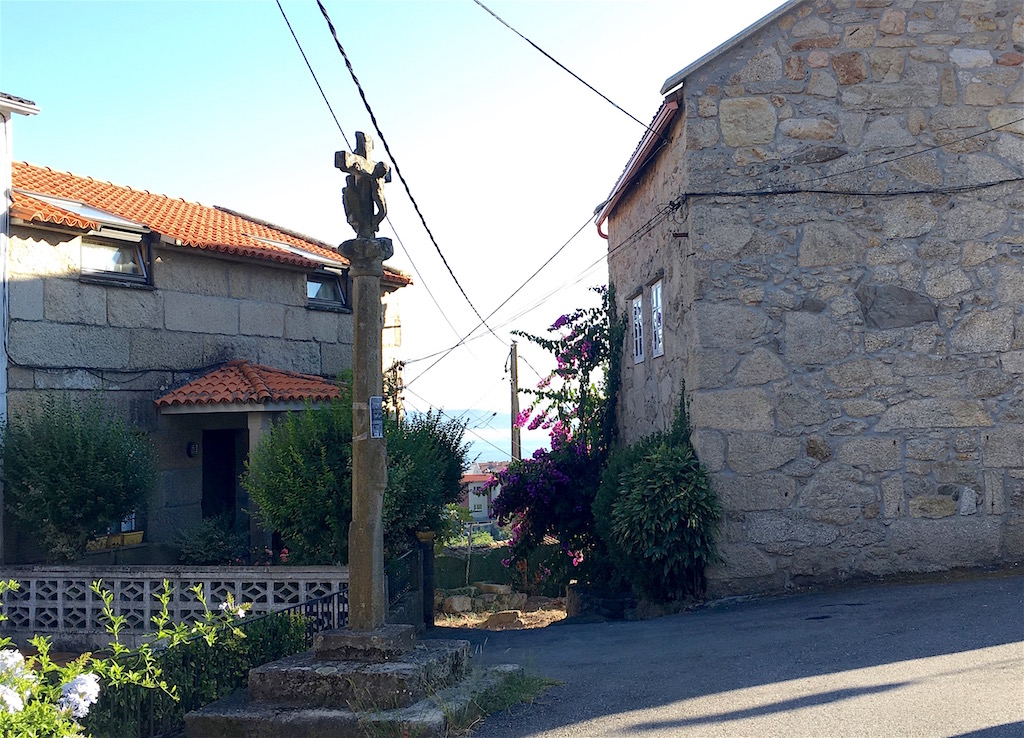 As I mentioned, Sanxenxo is in the middle of the Rías Baixas wine region, which is best known for its white wines made from the native Albariño grape. According to a Rías Baixas wine website, 96% of the grapes grown in the region are Albariño and 99% of the wines produced are white. Very fitting for an area with superb seafood!

We noticed on the map that there was a winery just 400 meters away, or just a 6 minute walk up the hill. Adega Eidos is a small family winery that makes only Albariño wine. We did not have an appointment but decided to take our chances dropping in. On a weekday afternoon, we were the only people there and we got a very nice private tour by Fernando. We stood out on the deck looking out to the water as he explained how this region is protected from the Atlantic by the land extensions and outer islands, giving it a unique microclimate. 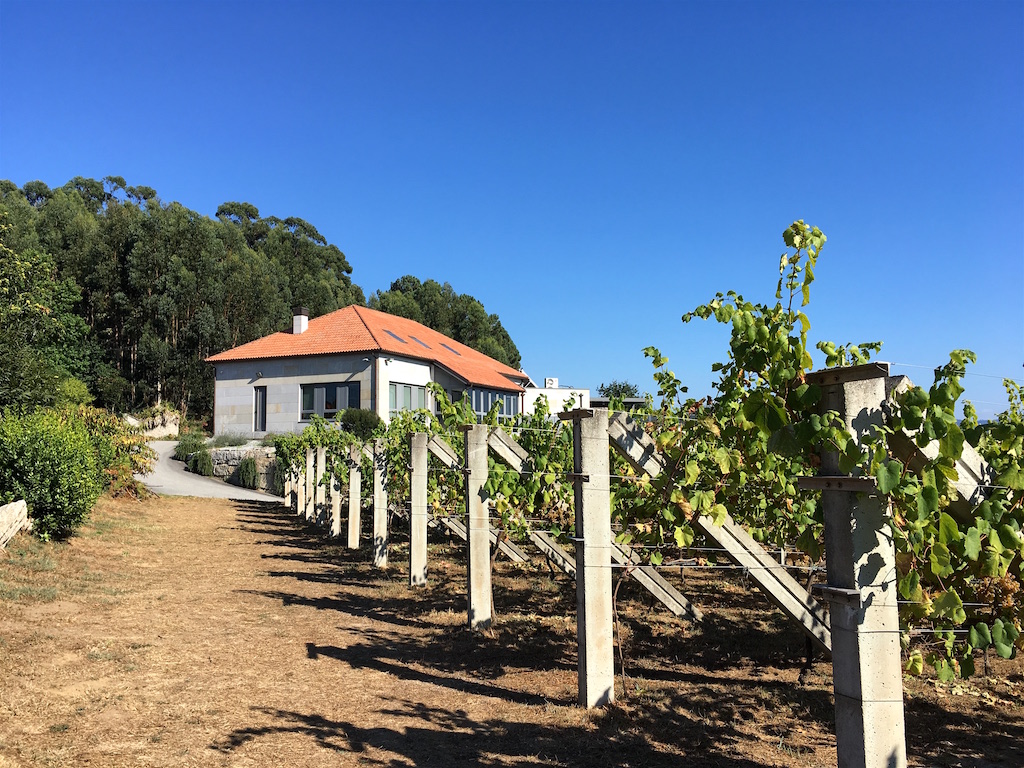 We walked through the vineyards and discussed the different trellising systems. The oldest vines in the vineyard are grown in the traditional method on a pergola-like trellis called a parra. The grapes grow horizontally overhead supported by granite posts and wires. The extra height allows for air circulation under the vines to prevent mildew in the wet environment. We saw vines on this kind of trellis all over Galicia. 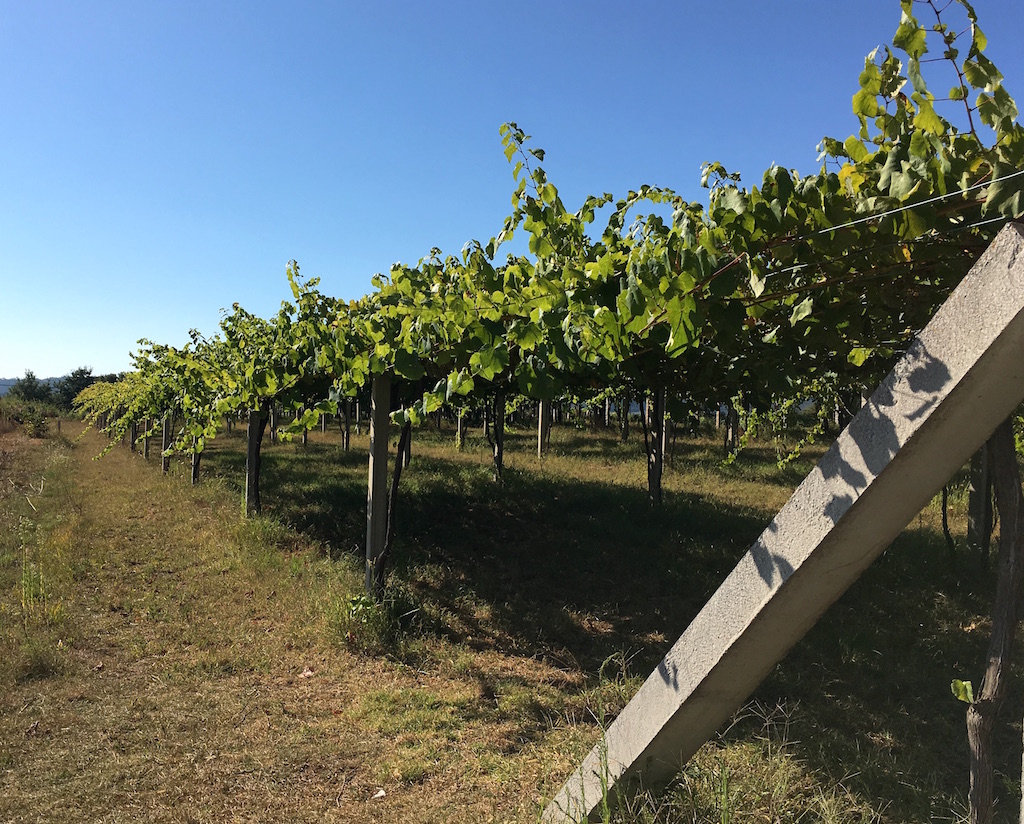 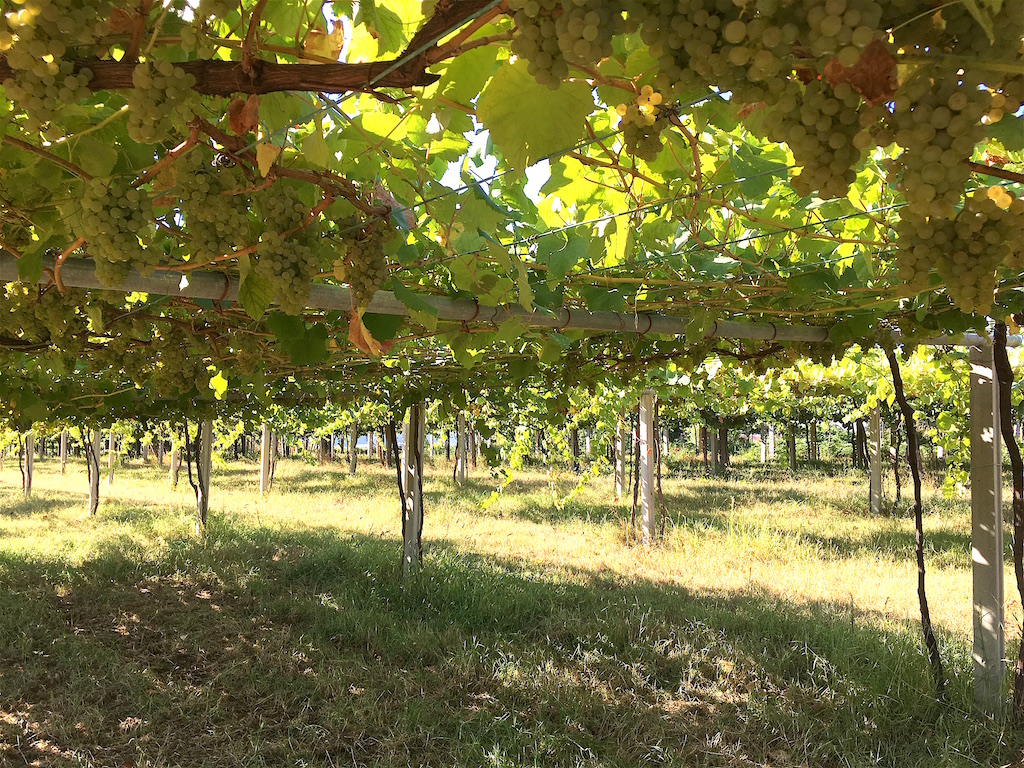 We also toured the wine-making facilities and watched a delightful and informative short video that showed the harvest process. Traditionally, the men in town were out to sea so the harvest has been done by the women. They still do it this way, with the older local women coming out to harvest by hand. (This is partly due to the fact that it is difficult to find experienced seasonal workers for the harvest, particularly ones that know what a perfectly ripe grape looks like!)

We finished with a tasting of Adega Eidos wines in the tasting room. They produce 50,000 bottles per year and export about 30% of their wine to the US and UK. They make only Albariño, in three different styles. Our favorite was the Eidos de Padriñán, which is a young wine with no aging, keeping it an easy drinker with high acid.

Adega Eidos is very welcoming to visitors and seems to have designed their winery to facilitate tours. We really appreciated the time that Fernando spent with us and his willingness to give us an unscheduled tour and tasting. All for just $3.50 each. We purchased a few bottles of their young wine to take with us.

And so we got our Rías Baixas wine experience with very little effort. Now for that Galician seafood!

Most of Sanxenxo’s restaurants are located down by the water. It was a short but steep ten minute walk from the Hotel Augusta down to the town center. The newer apartments along the waterfront are not the prettiest, but the narrow granite-paved streets and old granite buildings near the marina are very charming.

A promenade lined with restaurants and shops follows along the Playa de Silgar beach. It was still very warm in late September and the beach was full of people catching the last sun of the summer. There were even a few brave enough to go into the cold water. I imagine the Galicians are much tougher than those of us who have been living on the warm Mediterranean. 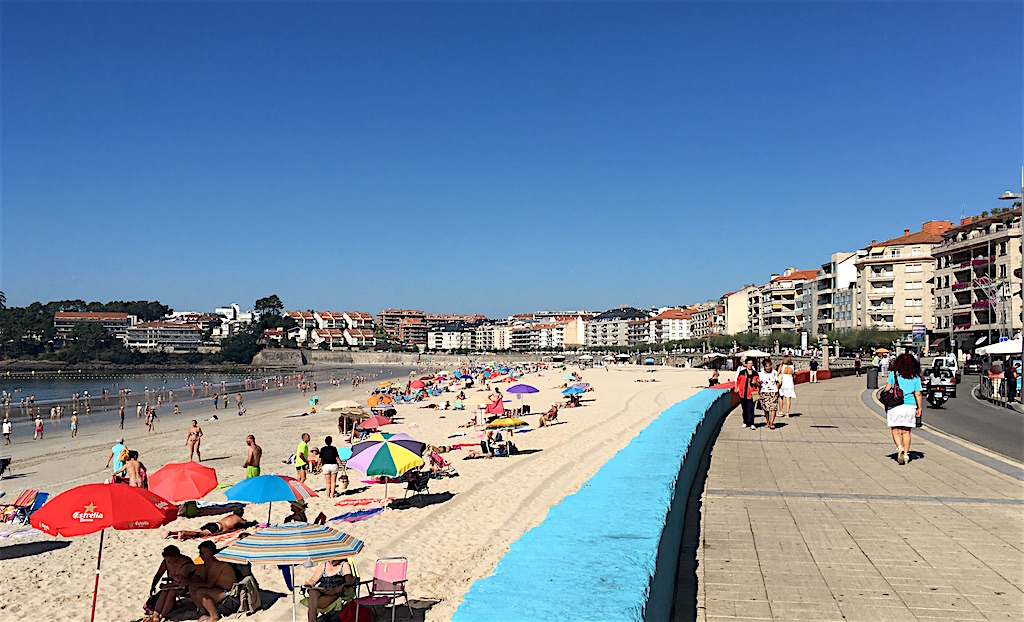 Sanxenxo is full of seafood restaurants called marisquerias. Most of the marisquerias had similar menus, making it difficult to choose among them. We landed at a table at Marlima Marisqueria because of its nice location on an isolated corner with a little beach on one side and the marina on the other. 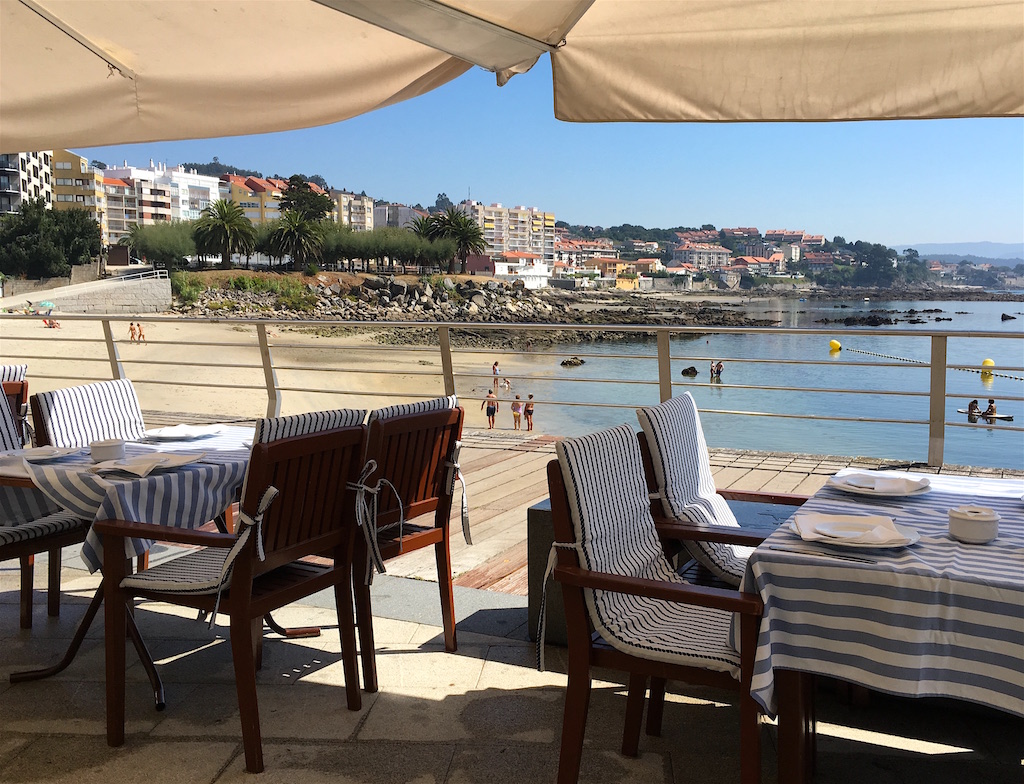 We started with 100 grams of percebes, the ugly but delicious goose barnacles that are a delicacy in the region. They were full of delicious briny flavor. Percebes are always expensive and these were up there at €128 euro/kg, but we really should have ordered more.

We also couldn’t be in Galicia without having the pulpo a feira, the traditional Galician preparation of boiled octopus seasoned with olive oil, paprika, and salt. We’ve had Galician-style octopus many times but never in Galicia and it was never this good. The texture was the most amazing thing about it – crisp yet tender.

Galicia is also known for its zamburiñas, a small variety of scallop that is found in the region. They are usually cooked still on the half-shell and eaten whole with the coral of roe still attached. These were broiled and a squeeze of lemon juice was all the sweet, delicate meat needed.

We also looked for some more contemporary and creative food. We walked along the marina browsing menus to select a spot for dinner among the many restaurants. We decided on Salgadoiro Gastroteca which sat at the end of the street facing the water. We liked the cool nautical interior, so we grabbed a tall table inside next to one of the large open windows with a great view of the marina. 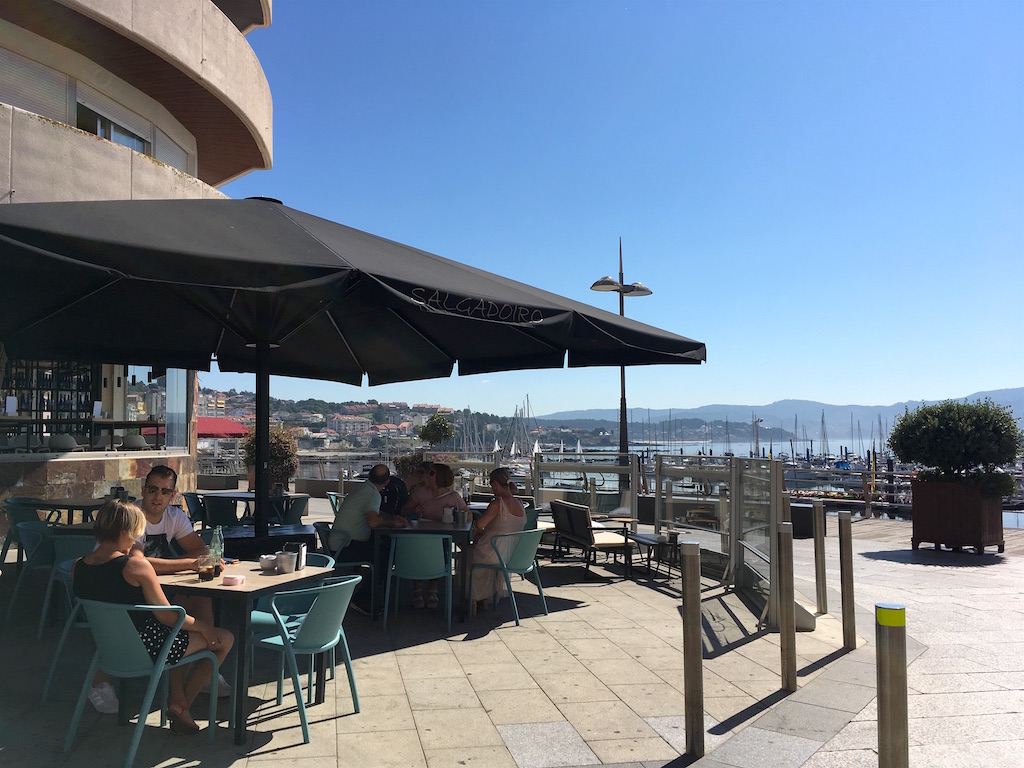 The menu of small gastroplatos looked very interesting but really we were just guessing at our order, since many items were unfamiliar. We started with a Taco de Guacamole con Langostinos y Fresas. To our surprise, the diced strawberries actually worked very well on top of shrimp with guacamole to make for a great taco. 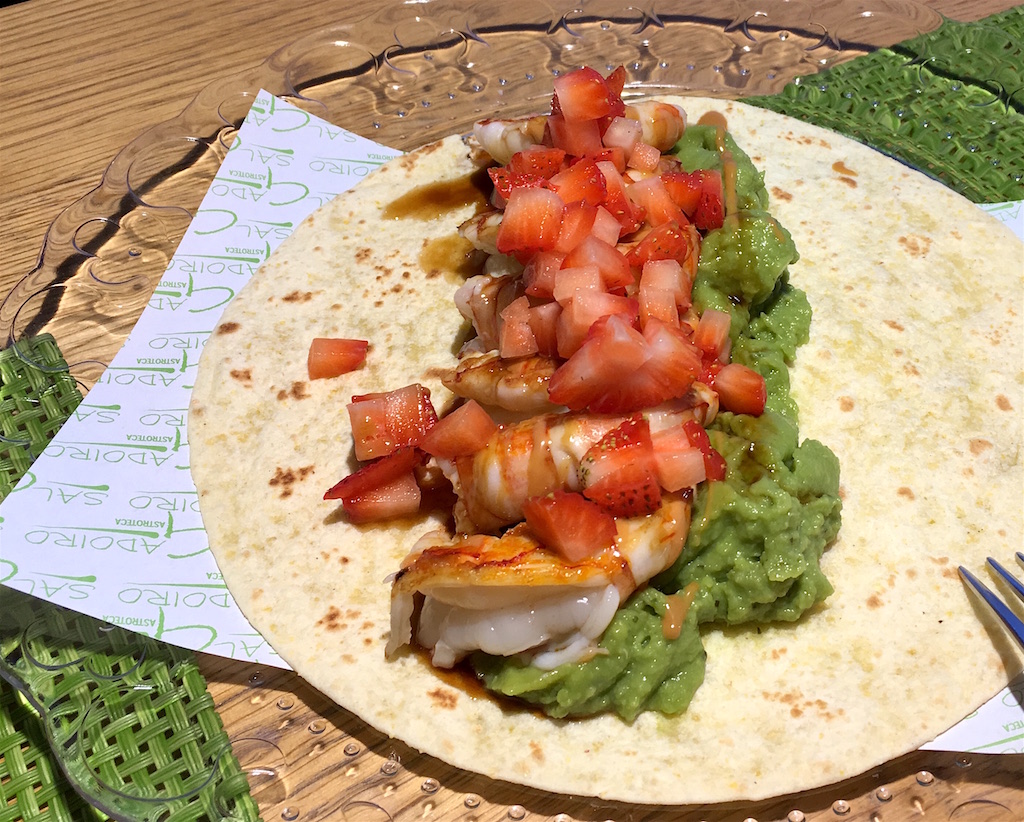 With our next selection, Tuetano al Kamado, Caviar de Erizo y Huevo de Codorniz, we were not sure what we were getting. Sea urchin roe and quail egg was all we could translate. It turned out to be an extravagant construction of a roasted marrow bone topped with fried quails eggs and a crumble of urchin roe. Fascinating and delicious.

Sanxenxo was a perfect place for us to recover from all of the traveling we’ve been doing in 2018. The busy tourist season was over and the atmosphere was very relaxed. It was quite nice to have a few days with nothing to do but lay low and chill. We emerged refreshed and ready for the next trip ahead.