With the arrival of summer, clóchinas began appearing in the markets and on restaurant menus all over Valencia. These very special mussels are unique to Valencia and only available May through September.

Clóchinas (also called clotxinas in Valenciano) are cultivated on 22 floating rafts located in the ports of Valencia and Sagunto. Harvest follows the cycles of the moon, beginning with the full moon at the end of April and ending with the waning moon of August. When the water begins to cool again in September, new clóchina embryos are seeded for the following year’s crop. It has been done this way since 1890 when they placed the first clochina rafts in the port of Valencia. At other times of the year, mussels (mejillones) in Spain usually come Galicia or the Delta del Ebro in Catalonia.

The right to call a mussel a clóchina is highly protected. There is an Association of Clóchineros of the Port of Valencia that has created a mandatory label to guarantee the authenticity of Clóchina de Valencia.

This year we will have a bumper crop. The Clóchineros of the ports of Valencia and Sagunto are estimating that 2017 production will be as high as 800 tons of Valencian clóchina, compared to the 500 tons produced in 2016. Winter storms resulted in colder water temperatures, which is beneficial to the mussels.

So how are clóchinas different from other mejillones? Clóchinas are actually a subgroup of Mytilus edulis (common blue mussels) named Mytilus galloprovincialis (Mediterranean mussels). Native to the Mediterranean, they are smaller in size but have a more robust flavor. This comes from the Mediterranean sea, which has a higher salinity than other seawaters and lends the mussels a saltier flavor. The water is said to be richer in nutrients and minerals, also contributing to the superior flavor.

Whatever the reason, the intensity of flavor is clear as soon as you taste them. The traditional way to prepare clóchinas is to steam them in their own juices, which releases a rich salty broth, and seasoned with lemon, garlic and olive oil.

Restaurants in Valencia each have their own version. Our favorites so far—the Crudo Bar next to the Mercado Central cooks their clóchinas in red curry sauce that is one of best things we’ve ever tasted. Salty, spicy and perfect with a cold craft beer. I don’t know how long this particular special will last, but we’ll keep returning for more for as long as we can. 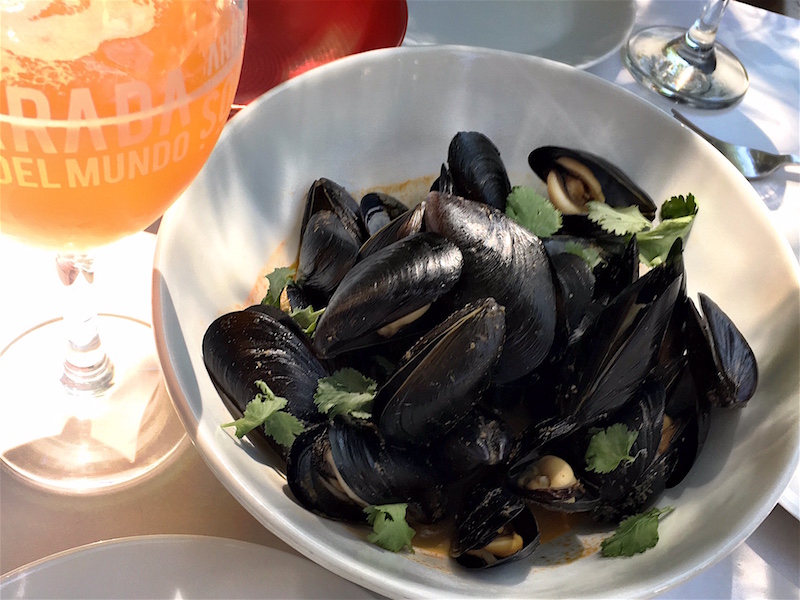 Nearby, Tasca Sorolla prepares a more traditional version of clóchinas with lemon, garlic, and bay leaf. The super savory broth was wonderful paired with a glass of white tempranillo. They clean and cook the mussels right in front of you after you order them, so you know they are freshly made.

We find that in Valencia the restaurants take special care to cook the mussels properly so that they remain plump and juicy. In the United States, too often mussels are overcooked and reduced to shriveled remnants of their potential. Could this be because Valencianos respect and value their prized clóchinas more highly? That’s my hypothesis. They speak of them with adoration and celebrate their arrival with clóchina festivals.

Clóchinas are also available at the markets and grocery stores (including Mercadona) throughout Valencia, so if you want to pick up a bag to cook at home, it’s quick and easy. They will disappear at the end of August and we intend to take advantage of them while they last!

Seafood paella for a crowd. First time using our 24 inch pan and it was glorious!😍🦐 I hope everyone is having a glorious time on this beautiful Labor Day weekend 🇺🇸
One of the advantages of joining the Cru club at Catoctin Breeze Vineyard is the opportunity to help with the harvest. The 2021 Chardonnay is looking beautiful! I can’t wait to taste the results! #catoctinbreezevineyard #marylandwine #grapeharvest #chardonnaygrapes #drinklocal
Follow Julia Eats on WordPress.com