We’re saying goodbye to winter with one more hearty recipe. Spring may have arrived in Valencia, but if we were in the Asturias region of north-west Spain right now, we might still have several weeks of cold wet weather ahead of us. We would definitely want a bowl of Fabada Asturiana. The inhabitants of this rugged part of Spain have been eating this rich bean and sausage stew for over a hundred years.

Taking porkiness to the extreme, Fabada Asturiana gets its richness from morcilla and chorizo sausages, pork shoulder, bacon and ham bones. Saffron and paprika add depth and smokiness to the stew. Fabada came about as a way to use leftover meats to make a calorie rich meal. These days most of us don’t need it to get us through the winter, but we sure do like it! We made one final pot of Fabada last week to counter a cloudy, 50°F day.

Fabada is always made with white beans, called fabes in Asturian. The bean variety “faba de Asturias” is a white kidney bean. Here in Valencia we find similar beans called alubia blanca, while in the US a good substitution would be cannelloni beans. The dried beans are rinsed well, then covered with cold water and soaked overnight.

There is some serious pork in this stew. Many recipes call for a ham hock. Here in Spain we found ham bones from legs of Iberico pigs, which lend an intense salty hamminess to the dish. We also use a very thick cut of bacon to add lots of flavor and fat. Adding the pork shoulder doubles down on the porkiness.

To begin, brown the bacon and pork shoulder in a large pot, like a Dutch oven over high heat. Remove and drain on paper towels. When the meat has cooled, cut it into bite-sized pieces.

Drain the beans and place them in the pot with enough water to cover the beans by 2 inches. Add ½ tablespoon salt (as you need). Bring the beans to a boil, skimming the foam off the top as it forms.

It’s time to add the meat. Poke some holes in the chorizo and morcilla sausages with a fork to keep them from exploding in the stew. Apparently the soft morcilla is going to explode no matter what we do, so you may want to consider using a firmer pre-cooked morcilla. If it is not possible to find morcilla where you live, just add your favorite sausage in its place.

Place the ham bones, chopped bacon and pork shoulder, sausages (whole), saffron, rosemary, paprika, and red pepper flakes to the pot of beans. The red pepper flakes are not typical. We add it because we enjoy a bit of a kick in our winter stews, but it is not a necessity. Bring back to boil then turn down to a simmer. Cook for 60 minutes.

We hold the onions and garlic back until the end of the cooking time because we prefer them to still have a little al dente crunch. You could add them earlier if you prefer. Dice the onion into bite size pieces (approx. ¾ inch) and slice the garlic cloves. Add the onions and garlic to the pot and salt and pepper to taste. Cook for another 30 minutes or until pork and bacon are tender and sausage is cooked through.

Before serving, remove the sausages from the pot and slice them into bite-sized pieces. Also remove the rosemary stalk. The leaves will have come off in the stew. Return the sausage to the pot, stir in, and serve. 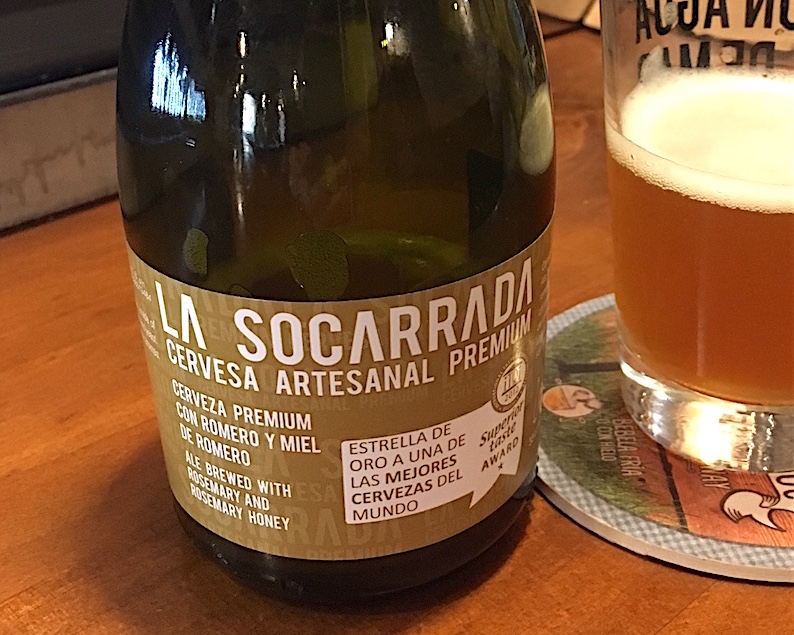 The traditional accompaniment to a bowl of fabada would be an Asturian cider, but red wine or a big beer also work well. We paired it with La Socarrada, a Valencian beer brewed with rosemary and honey that complemented the stew perfectly.