Few things are more important to Spanish cuisine and culture than jamón ibérico, the celebrated ham made from Black Iberian pigs. Spanish ham is considered to be the best in the world. Massive legs of jamón hang from ceilings in restaurants and markets all over the country. I can’t recall seeing a restaurant menu in Spain that doesn’t have some version of jamón ibérico on the menu.

The processing and labeling of jamón ibérico is highly regulated in Spain. It must be made from black Iberian pigs, which can be cross-bred as long as they are at least 50% Ibérico. The pigs are fed a diet that includes acorns (bellotas) that are high in oleic acid. This oleic acid, which is the same monounsaturated fat found in olive oil, lends a silky texture to the meat. Each jamon is labeled with the pigs diet and ancestry, with acorn-fed pure Iberian pigs being the most desirable.

We are still learning our way around jamón ibérico. Walking up to a jamon stall in the market can be very daunting, with dozens of legs of jamon dangling from the ceiling. There is a huge range of price and quality. We have found prices ranging from under €50/kg ($23/lb) to over €150/kg ($68/lb). To the inexperienced, a display like this can be immobilizing. When I see these stalls at the market, I’m speechless.

Until recently, determining the quality of jamón ibérico was very confusing. Thankfully, the Spanish government approved a new, simplified color-coded system for grading jamón ibérico in 2014. The system takes into consideration the pigs breed, diet, and where it was raised. My simplistic interpretation is as follows:

Armed with this new knowledge, we could start ordering some jamón on our own. We had walked by this restaurant named Beher (of Jamón Ibérico producer Bernardo Hernández) a dozen times. Our heads always turned at the sight of artfully displayed meats. There are even paper cones filled with jamon tempting us, as if walking down the street nibbling a pile of ham is a normal thing to do. 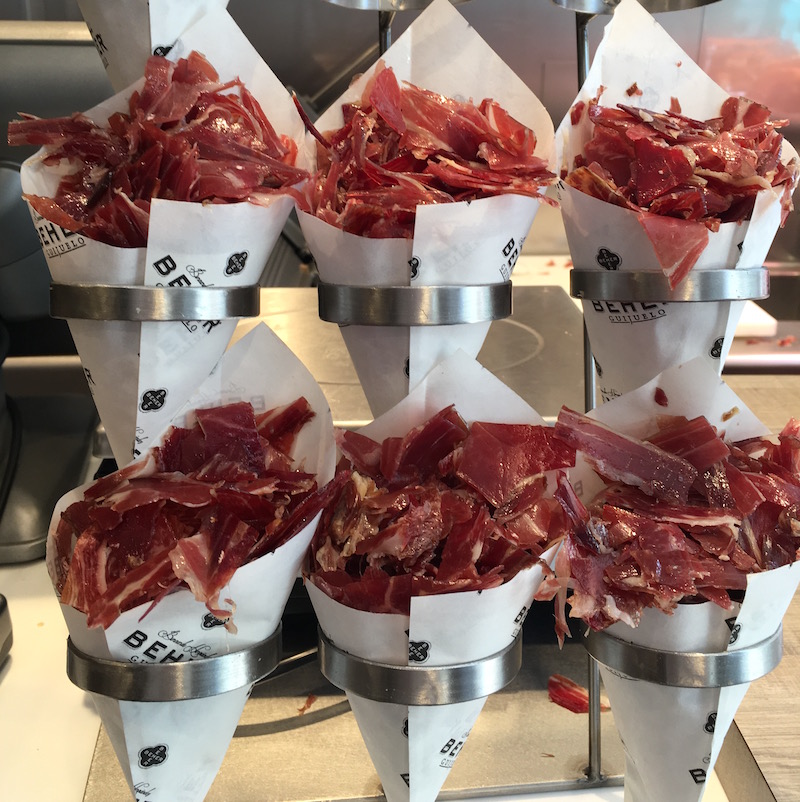 Beher is located next to the beautiful Plaza de Ayuntamiento (Town Hall Plaza) on a street lined with touristy cafes, fast food restaurants and ice cream shops. We had been hesitant to go in, worried that it might be another tourist trap, but the draw of jamón was too strong and we eventually gave in.

Bernardo Hernández Blázquez founded his family business in the village of Guijuelo in Salamanca, Spain in the 1930’s. They raise their own acorn-fed pure Iberian pigs for their jamón ibérico and other products, including lomo (loin), sausages such as chorizo and salchichon, longaniza (salami) and panceta (bacon).

The beauty of Beher’s restaurant/retail store is that you can get plates of their jamóns and other meats at reasonable prices, offering the chance to try the different types of meats at various quality levels. A racione is a portion meant to be shared. We usually find the half racione size plates to be sufficient for the two of us. At Beher, the half raciones of meat ranged from about 8 to 12 euros.

We ordered a half racione of the Jamón Ibérico Puro Etiqueta Roja. Beher’s red label jamón is made from 100% iberian pigs and cured between 26 and 36 months. The ham was marbled with buttery fat that melted on the tongue. We also tried the Lomo Ibérico Bellota, which is made from the loin of the pig, a leaner cut than the jamón. We find that the lomo has a more intense meaty flavor while still being very tender. Both meats had the nutty flavor that is characteristic of acorn fed Ibérico pigs. 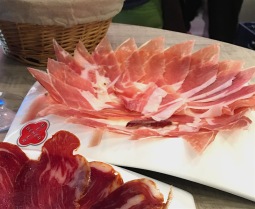 The wine list has some nice options for jamón friendly red wines by the glass. Our server was enthusiastic about their wine offerings and was happy to provide recommendations. We had glasses of the Ramon Bilbao Edicion Limitada from Rioja and the Emilio Moro Crianza from Ribera del Duero. These wines are made from Spain’s signature grape varietal, tempranillo. Both wines were dry and earthy, with dark fruit flavors and good acidity to complement the meat.

I’m so glad that we decided to give Beher a try. Despite being located in a tourist area, the staff seemed to really care about the quality of their service and showed pride in their product. Beher’s jamón ibérico has won frequent awards at the International Fair in Frankfurt, a major international competition of meat products held in Germany. Beher’s Bellota Oro, which is cured for 36 to 44 months, was deemed the best ham in the world in 2007, 2010, and 2013. We’ll definitely be trying this on our next visit.