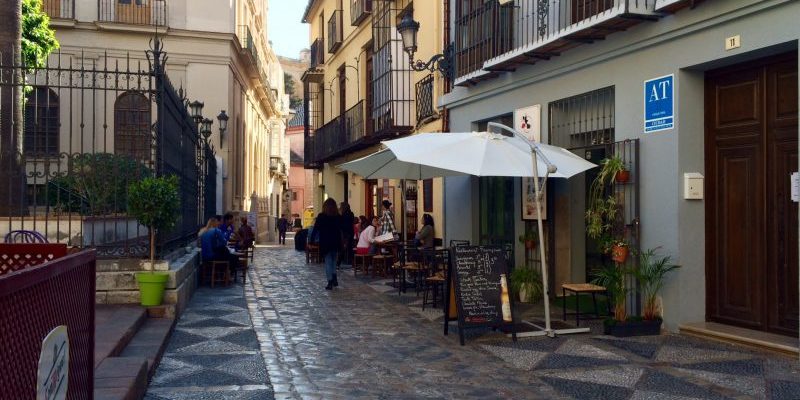 Malaga: Restaurants In The City 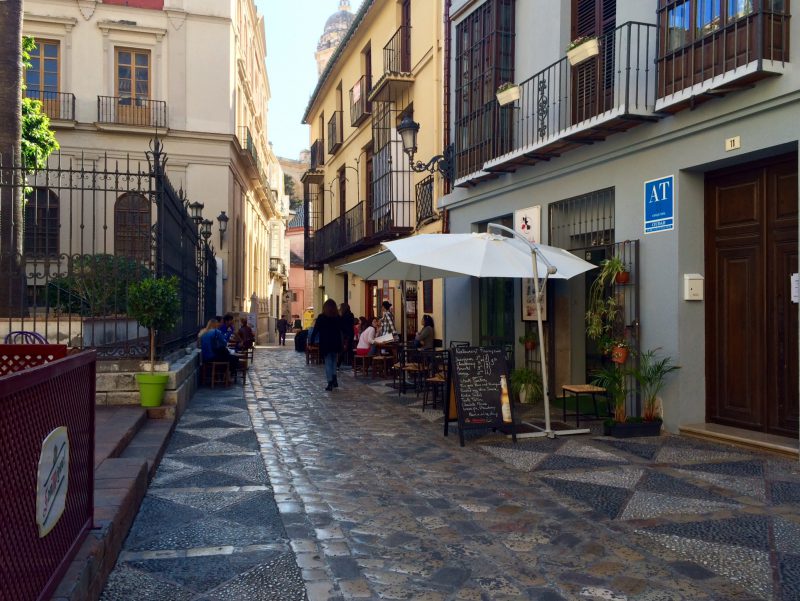 The winding streets of Malaga’s historic city center are perfect for meandering. The picturesque plazas are surrounded by restaurants and shops. Tapas bars can be found on just about every street, even the narrow little alleys. Everywhere people were eating, drinking, lounging at sidewalk cafes, and enjoying the beautiful spring weather. It really made me hungry. 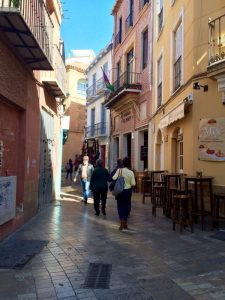 It was easy to find good food all over the city, as long as we followed a few rules. No lunch before 1:00 pm at the earliest and no dinner before 8:00 pm. Many of the restaurants shuttered their doors around 4:30 and didn’t reopen until 8:00 pm. We weren’t very good at this last rule, so most evenings we just tapa crawled around the city rather than looking for a formal dinner.

In general, we found the following to be true in most of the tapas bars. A small beer that is a little less than half a pint, called a caña, cost about €1.50. Most bars only have one beer on tap, so you ask for “una caña” and take whatever they bring you. In Malaga, it was usually Cruz Campo or San Miguel. A small glass of wine, about 5 ounces, was around €2 to €3. Everywhere we went, we received a bowl of olives or some other little snack with our drinks. The tapas were usually priced at between €1 to €4. Most restaurants also have larger portion dishes to share which are available in ½ ración or full ración portions. We found that ½ ración was a good size for the two of us to share.

We only scratched the surface of the cuisine available in the city center of Malaga. I can’t wait to return to this friendly city to explore the many restaurants. Until then, here are a few that we thought were outstanding. 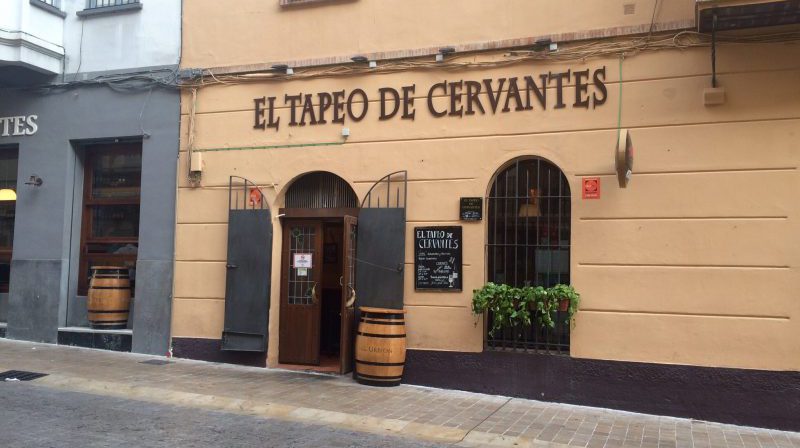 El Tapeo de Cervantes is one of Malaga’s smallest tapas bars and the space was packed when we arrived. We squeezed into two seats at the bar next to the service window, which gave us a nice view of the selection of red wines they served by the glass. We tried several of the Riojas and Ribera del Duero wines that stood up well to the heavy food that we ordered. We shared ½ ración plates of venison fillet with wild mushrooms, thick chunks of morcilla (blood sausage) sitting atop little sweet potato slices, and sweetbreads simply prepared cut thin and fried, served over slices of fried potato. This was one of those meals that really sticks with you! It was a long time before we were hungry again. 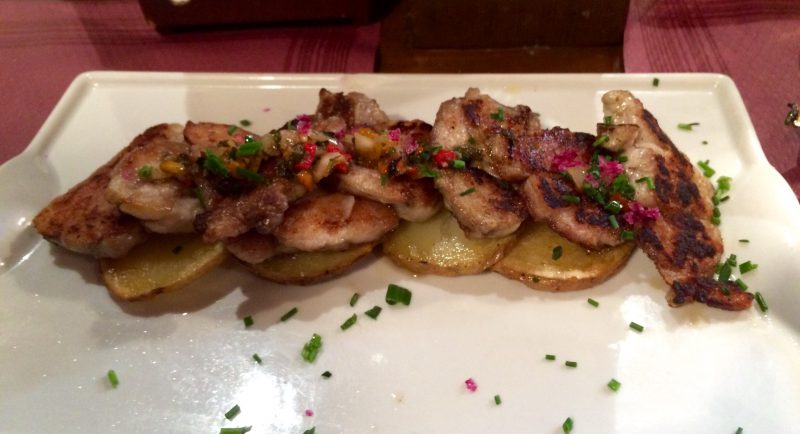 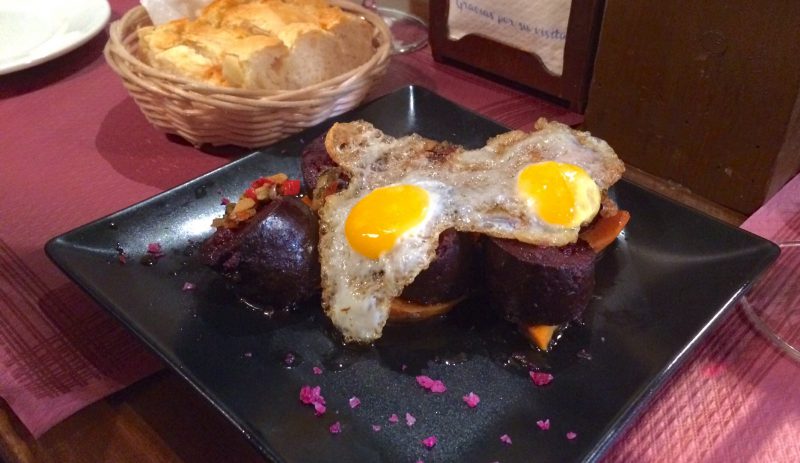 Next door, Vinería Cervantes has a bright, modern, open interior. Here, on a different day, we started with small beers and tapas of pickled anchovies and cod-filled red peppers while we studied the seafood side of the menu. We selected ½ ración plates of cod with creamed potatoes and incredibly tender grilled octopus with smoked mashed potatoes, paired with a few glasses of the house Albariño. 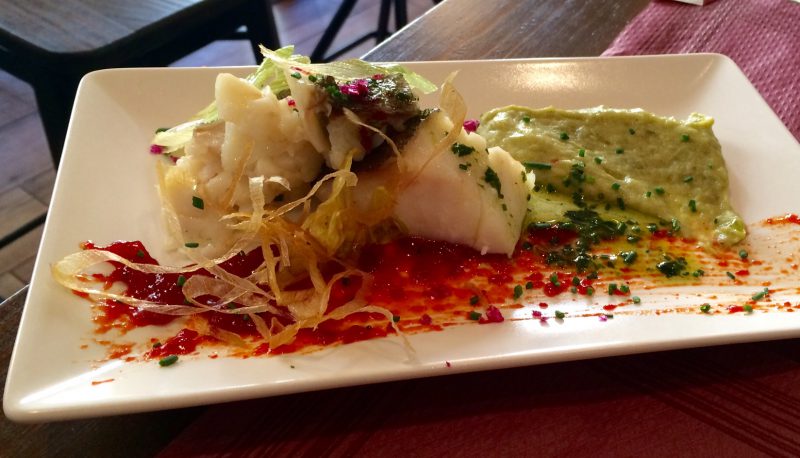 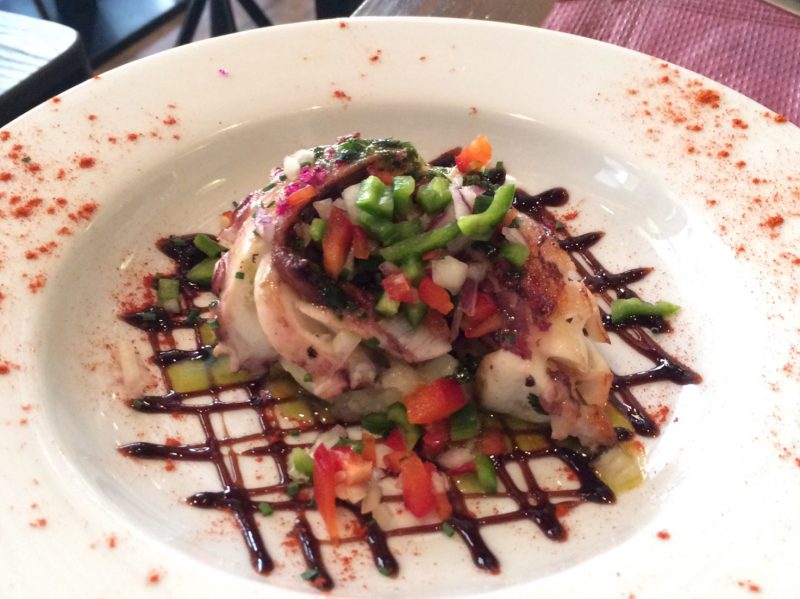 In both locations, the food was artfully presented and tasted as incredible as it looked. The staff paid careful attention to detail and presentation, and never allowed a dirty plate to linger. The owner, Gabrial Spatz, frequently came by the table and attended to us. The prices were also reasonable. Tapas were €3 and the ½ ración plates shown here ranged from €6 to €8. Despite the quantity of food and wine we consumed, we failed to spend more than €40 at each meal. 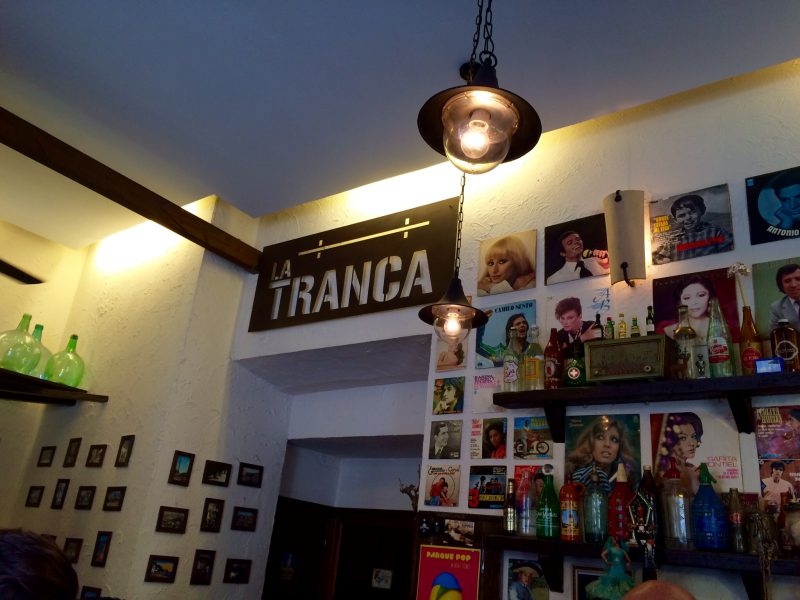 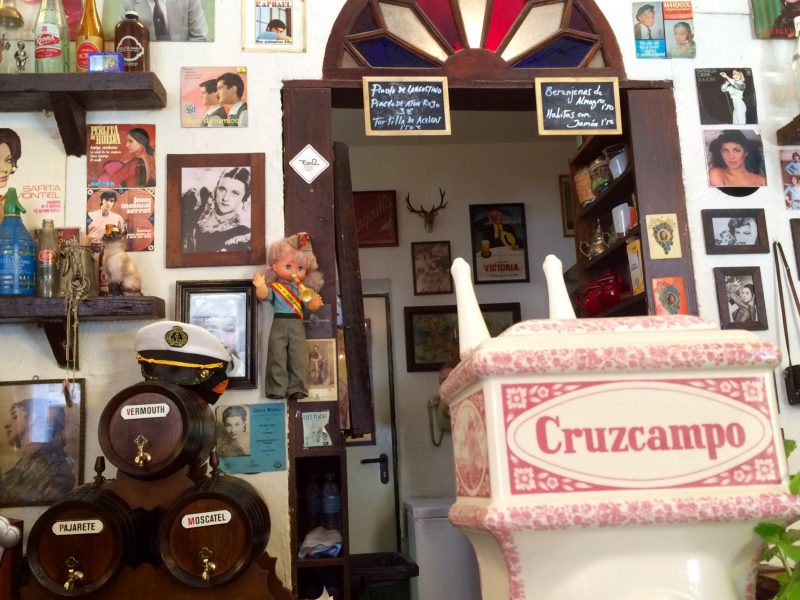 We found La Tranca on Calle Carretería by pure luck. It was just around the corner from our rental apartment and we walked by every day. People standing around barrel tables spilled out onto the narrow sidewalk. Everyone was happy. Friendly bartenders sang along to videos of classic Spanish music videos from the 60s. Aperol spritzers – a mixture of white wine, Aperol (a bitter orange Italian aperitif) and a spritz of soda water – were the drink of choice in the afternoons. One of the three owners who was frequently at the bar is originally from Argentina, which explains why the empanadas were so good. The crust was light and the fillings flavorful and at €1.60 each we could go through a lot of them. The tortilla de potato pincho was also a good choice and huge for €1.50. When we were ready to leave, the bartender would tally up our tab in chalk on the counter. 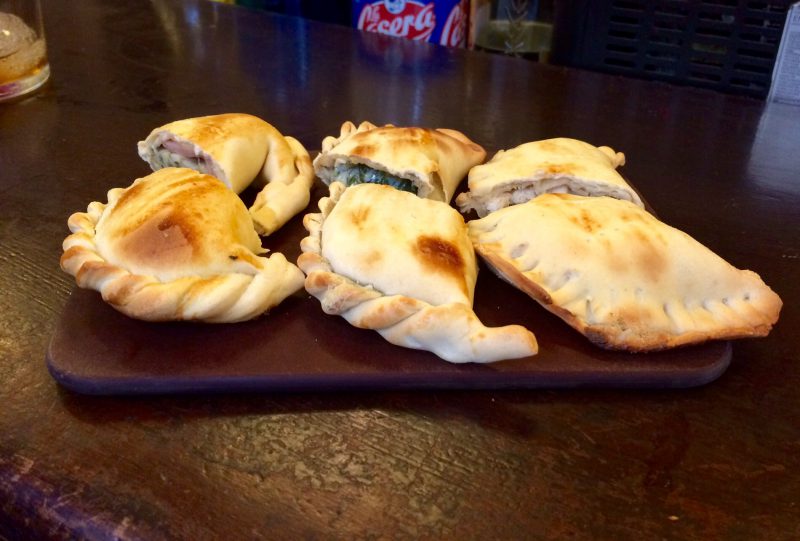 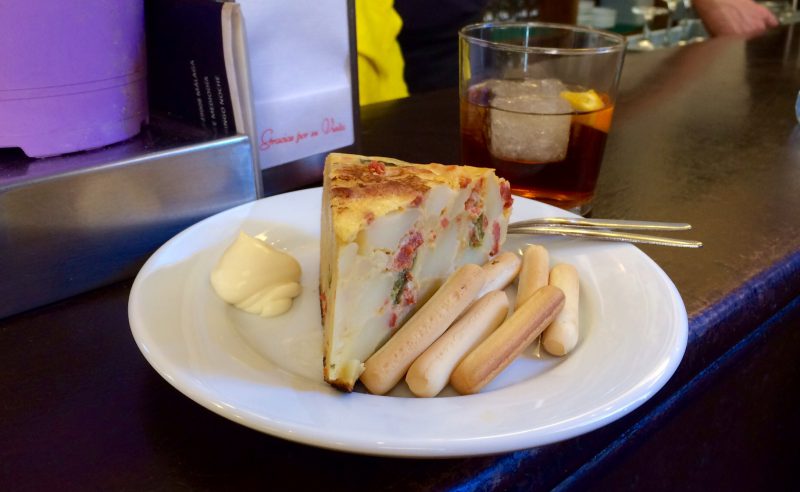 Tortilla with pepperoni at La Tranca

It’s easy to see why this place so popular. Cheerful atmosphere, good food, good prices. They open every day at 12:30 pm and stay open until 2 am (4 pm on Sunday). It became our daily routine to stop by La Tranca for a vermouth de barril or a sweet Malaga wine called pajarete, each for less than €2 for a glass. If we lived in Malaga, this is where we would hang out. 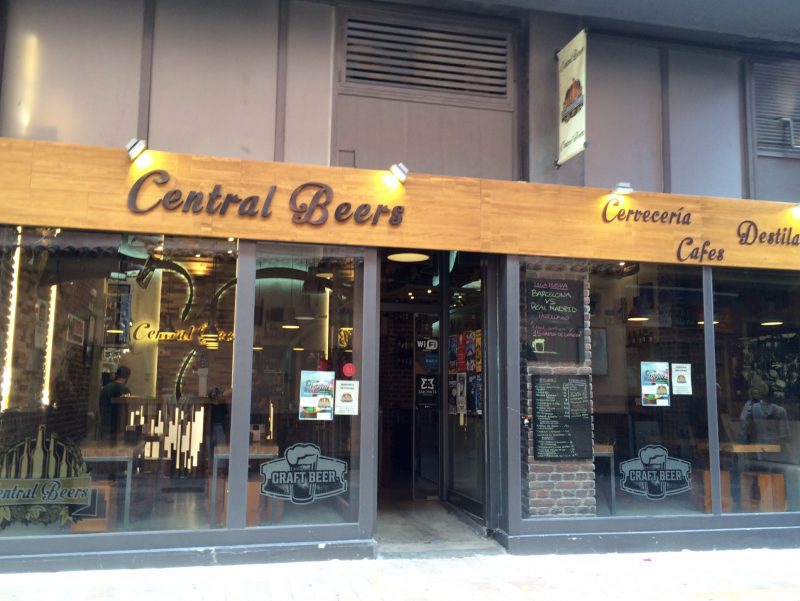 Despite the fact that most bars only have one beer on tap, craft beers are becoming more and more popular in Spain. Malaga has several bars specializing in craft beers. Central Beers on Calle Cárce, one of the newer bars, opened in February of 2015.

As usual we were there early and pretty much had the place to ourselves, so we spent some time chatting with the bartender. Craft beer is a new concept for many Malaguenos, who are used to just asking for a caña of beer and getting whatever lager is on tap. He was very excited about the different flavors and styles possible in craft beer. They have 15 beers on tap and a list of over 100 bottled beers from around the world. There were even some hard to find American craft beers on the list that we were surprised to see.

The selection of beer on tap is displayed on a screen above the bar. This was a good opportunity for us to try some local craft beers of Malaga, like the Kraken saison and Daido Baltic porter from Bonvivant Microbrewery and the Trinidad Brown Ale from Cerveza Trinidad. 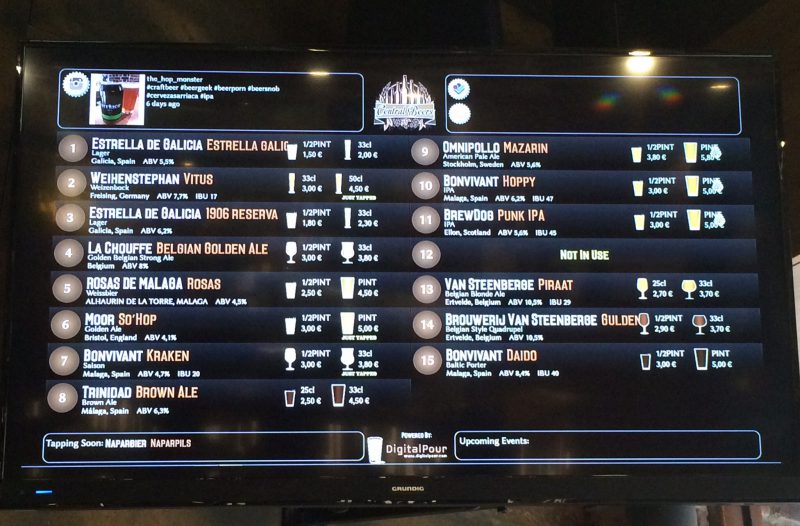 Beers on tap at Central Beers

As always, the beers came with a bowl of olives. If you are hungry for more, they have a menu of tapas, small plates, salads, and hamburgers. Of course we didn’t get to try any of these, as we were there too early for the kitchen which opened at 8:00 pm.

No worries! In Malaga, there is always another tapas bar just down the street and we knew we would be stopping by La Tranca, where the empanadas were always ready.

If you like this article, take it with you to Malaga by downloading the GPSmyCity app for your smartphone or tablet.